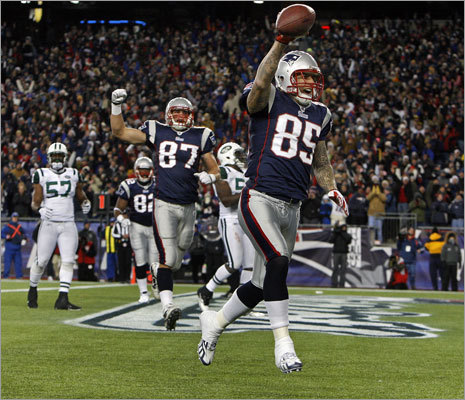 In the first half last night, they were shouting.

New England rolled to a 45-3 victory tonight, with Tom Brady once again posting a near-flawless performance and bolstering his MVP chances, and the defense pulling in three interceptions, all of which the Patriots turned into points.

“Obviously we got outcoached, got outplayed, got our butt-kicked. I don’t know what else you can say about it," Ryan said. "It's the biggest butt-whipping I've ever taken as a coach."

The Patriots took a one-game lead in the AFC East with four games to play.

That they quieted their boastful rivals in the process was just frosting on the cake.

Brady was 21 of 29 for 326 yards and four touchdowns. Running back BenJarvus Green-Ellis had 72 yards and two touchdowns.

"It was a big win, we were playing a damn good team. It was one win. Obviously there's many more big games for us down the stretch," Brady said.

Jets quarterback Mark Sanchez was intercepted three times. He connected on 17 of 33 passes for 164 yards.

True to form, the Jets, who won the coin toss and elected to defer, came out in the third quarter and began moving the ball. Sanchez completed passes of 12 and 24 yards to Santonio Holmes and Braylon Edwards, respectively, and New York got to the edge of the red zone on a four-yard first-down carry by LaDainian Tomlinson.

The Jets began to slow, but converted a fourth-and-1 with a short pass to Holmes to earn a fresh set of downs at the 11-yard line.

First down was another handoff to Tomlinson, which netted two yards, and on second down the much-maligned Patriots’ defense struck again. Sanchez looked to Edwards – who did little to help his quarterback last night, with a couple of drops – over the middle at the goal line, and Brandon Spikes reached up and took the ball for himself.

Starting at his own 7-yard line, Tom Brady marched the Patriots on an eight-play, 93-yard touchdown drive that effectively put the game out of reach for the Jets. The big play on the drive was a 35-yard catch-and-run by Aaron Hernandez, after which Brady grabbed the tight end by the helmet and became visibly emotional with him.

It has been a tough few weeks for the rookie, who had just two catches in New England’s previous three games. But he’s had some of his best success of the season against New York – his only 100-yard game was in the New Meadowlands in Week 2 – and had some key gains again last night.

But the defense wasn’t done.

A short kickoff by Shayne Graham in a windy, cold Gillette Stadium, and an 18-yard return by John Conner had New York starting its drive near midfield. An eight-yard carry by Shonn Greene put it into Patriots territory and facing a short second down.

Working out of the shotgun and the no-huddle, Sanchez dropped back and looked to Edwards down the deep right sideline. Patriots cornerback Devin McCourty, in one-on-one coverage on the receiver, turned and made a play on the ball, pulling in his sixth interception of the season and fourth over the last three games.

Not known as a ballhawk coming out of Rutgers, McCourty now has as many picks in his rookie season as he did in his entire career with the Scarlet Knights.

If the door was ajar after the Patriots went up 31-3 off Spikes’ interception in the third, it was slammed shut at the start of the fourth, after another eight-play touchdown drive, this one covering 94 yards, and finished with a short scoring pass to Hernandez.

Danny Woodhead turned a shovel pass into a 50-yard gain, and three plays later Brady hit Hernandez in the right half of the end zone.

Once James Sanders intercepted Sanchez with 12:46 left in the game, the deadbolt was locked.

It was a start-to-finish manhandling by the Patriots. The first sign that New England would have a good performance came Tuesday evening, after a tough full-pads practice earlier in the day. Belichick gave the players Wednesday off, and it’s easy to assume part of the reason he did so is the players came into the facility that day – after a four-day post-Thanksgiving break – ready to go.

The Pats went into the locker room with a 24-3 lead, having held Sanchez to just 77 passing yards on 8-of-18 attempts; adding insult to incompletions, he was dropped for a 15-yard loss on the final play of the first half.

Things didn’t get any better from there for the Jets.