Patriots are happy with the many contributions of veteran tight end 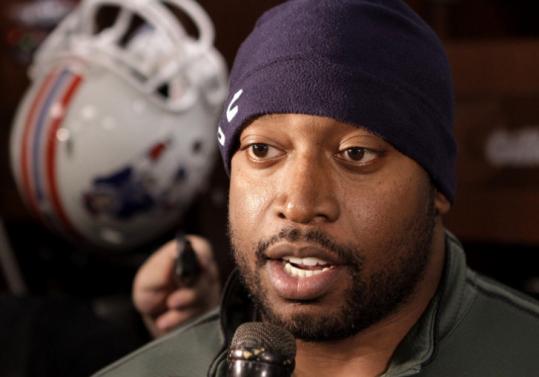 Sometime last month, a pattern emerged: each time Tom Brady would be asked about his rookie tight ends, Aaron Hernandez and Rob Gronkowski, the quarterback instead would talk glowingly about the third member of that group, Alge Crumpler.

The signing of Crumpler by the Patriots in March wasn’t splashy, and was met with a tepid response by those who follow the team. New England was rebuilding its tight end unit from scratch, and the player it acquired was 32 and overweight, with his best seasons (four Pro Bowls) presumably behind him? Yes.

Crumpler has become a major contributor in more ways than the stat sheet shows: he has but three receptions for 35 yards.

But the 6-foot-2-inch, 275-pound veteran is arguably the league’s best blocking tight end, a mauler who excels at opening holes for running backs and helping keep Brady upright.

Most importantly, however, he is an elite-level teammate and mentor.

Word first came that the Patriots were getting a leader via Jeff Fisher, Crumpler’s coach with the Titans. Crumpler spent two seasons in Tennessee after seven with the Falcons.

“He’s got a lot left,’’ Fisher said at the NFL spring meetings. “He’s a terrific person, a great team guy, and he’s got a lot of plays left. I was disappointed we weren’t able to keep him.’’

Comments like those were likely what Bill Belichick and Patriots’ brass heard as they did their homework on Crumpler before signing him.

“As a player I’d say probably [Crumpler is] what we expected,’’ Belichick said. “You hear about guys, and you research them, but you never really know until you’re with them on a day-to-day basis for a long period of time. So everything about him was positive and good, but I’d say after being with him that he’s really up there in the exceptional range, as good as we’ve had kind of guy.’’

It isn’t rare to hear that a player works hard or is a good teammate — but words like “exceptional’’ don’t get tossed around often, especially in Foxborough.

When he became a free agent this year, Crumpler found himself in contact with Belichick, who promised only that his role with the Patriots would be what he made of it; Crumpler respected the honesty.

But before he came to New England, there was something Crumpler had to do. Embarrassed by his weight and the condition he was in, he sought out trainer Mackie Shilstone and worked with him in New Orleans. Crumpler dropped a significant amount of weight, but he prefers not to specify how much.

“The training paid off and I walked into Foxborough confident I could help this team,’’ he said.

Crumpler clearly isn’t the pass catcher he once was; he averaged 45 receptions a season with Atlanta, and 53 catches during his Pro Bowl seasons (2003-06).

With the Titans having young tight ends when he arrived, Crumpler’s role began to change to more of a blocker; now, with the Patriots, he is almost exclusively a blocker.

Crumpler misses being a bigger part of the pass game. But he still prepares as though he is, noting it’s hypocritical of him not to be ready when that is what he preaches to his teammates.

Crumpler was made a team captain a few weeks into the regular season, in part to take the place of Kevin Faulk, who was placed on injured reserve. There are others who have been with the team longer, but it was Crumpler who was chosen.

“It’s really just the kind of guy he is,’’ Brady said. “He comes into work every day, he’s here early, stays late, does his workouts, always does the right thing on the field, he’s always showing guidance to the two younger tight ends, he always corrects them — he’s kind of like a quasi-father to those two kids. Like, ‘OK, this is life in the NFL, this is how you’re going to do it.’ He’s got a lot of experience, run-blocking and pass-catching, and anything that we ask him to do he does it, he loves doing it, and he’s a huge addition to this team.’’

A month after signing Crumpler, New England selected Gronkowski in the second round of the draft and Hernandez in the fourth. The 10th-year player immediately began showing them the ins and outs of life as a professional football player.

The trio has private film-study sessions, even before the coaches meet with the team to do the same. After every New England offensive drive, Crumpler talks with the rookies. When Hernandez struggled against Baltimore and Gronkowski had a poor outing in Cleveland, Crumpler was there to counsel and encourage.

When Gronkowski bounced back against the Steelers with a three-touchdown game, Crumpler could not hide his pleasure.

“He’s a great guy; I love being out there with him,’’ Gronkowski said. “He’s a great leader, he does everything by example, he’s a hard worker, he knows what’s going on, he’s really aware and always focused and it helps me out a lot because he teaches me a lot of stuff and he helps me out when I’m in trouble. Sometimes when I’m not sure what to do he’s right there to help me out. It’s awesome having him.

“He’s definitely like a big brother. He’s like a daddy actually, not a big brother’’ — here Gronkowski gives his high-pitched chuckle — “I call him ‘Crump Daddy.’ ’’

Asked why he helps the young duo, Crumpler says that doing so makes the team better; when he was a rookie with the Falcons, Brian Kozlowski and Reggie Kelly groomed him, and “I never felt any animosity from them,’’ Crumpler said.

So he pays it forward.

“It’s huge,’’ Brady said of the impact Crumpler is having on Gronkowski and Hernandez. “They can look at him as a mentor, they always have him to rely on. Whatever questions they have, Alge will tell them the exact right way to do things, and they’re really lucky to have a guy like that.’’

The younger players aren’t the only ones who look to Crumpler for help. Brian Ferentz, the de facto tight ends coach, has said that he leans on Crumpler “pretty heavily’’ and called him invaluable for his influence on the entire team, not just tight ends.

In a recent discussion with Deion Branch, Crumpler offered observations on the offense. Branch has seen the effect Crumpler is having on Gronkowski and Hernandez since he rejoined the Patriots, and marvels that Crumpler is fine with his new role.

“It speaks volumes of a guy like Alge who at one point was known as the Antonio Gates [-type tight end], and now he’s accepted a role. Guys probably wouldn’t have a problem with it three, four, five games,’’ Branch said, recognizing that it has been all season for Crumpler. “He isn’t complaining. But still he could go out and make those plays for us when we needed him to.’’

For now, though, Crumpler is excelling as a leader, mentor, and teammate. And that suits the Patriots just fine.

“It’s worked out great,’’ Belichick said. “There’s no better example any rookie could have at their position than Alge Crumpler.’’