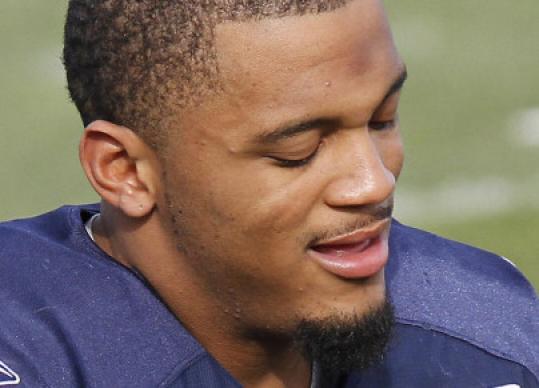 Patrick Chung made an impact in his return against Pittsburgh. (Robert E. Klein/For The Globe)
By Shalise Manza Young Globe Staff / November 19, 2010

FOXBOROUGH — One of his veteran teammates said it before the season: Patriots safety Patrick Chung reminds him of Rodney Harrison.

Given what Harrison, now an analyst for NBC Sports, did in his career, that’s high praise for Chung.

Seven games into his second season, Chung appears to be all of those things as well. He returned against the Steelers last Sunday night after missing two games with a right knee injury and made a quick impact, recording a team-high 10 tackles and breaking up a pass.

He popped Steelers receiver Mike Wallace at the end of the first quarter on a third-down catch; at first, it appeared that Chung had stopped him short of the first down, but when the spot was measured, Pittsburgh had the first down.

Later in the half, Chung closed quickly on a screen pass to running back Rashard Mendenhall, holding him to a 2-yard pickup; in the third quarter, Chung and Mike Wright dropped Mendenhall for a 4-yard loss.

For the year, Chung has been credited with 55 tackles, third on the team behind Jerod Mayo (112) and Brandon Spikes (58), despite sitting out those two contests. There was also his memorable special-teams performance in Miami, when Chung blocked a punt and a field goal; the second block was scooped up by Kyle Arrington and returned for a touchdown. Chung finished his night against the Dolphins with a pick-6.

Just as Harrison once did, Chung is making opponents take notice.

“He’s an impact player,’’ said Colts coach Jim Caldwell of the former Oregon Duck. “He covers the field well, he’s got really good instincts, and he’s extremely tough. I think when you have that kind of combination, along with the sophistication of their defensive structure, you’ve got a guy who sets a great tone for them.’’

“He’s got excellent speed, big-play capabilities, and just seems like he has a real knack for the football.

“Last year being his rookie year, he got great experiences and just seems like he’s taken a big step into his second year, which I can relate to. After playing as a rookie, things become more comfortable for you in the second year. And you really see Chung flying around out there.’’

It is to Chung’s credit that he is having a breakout season after a disappointing rookie year. The Patriots’ first pick last year at 34th overall, he saw limited time with the defense, logging just 194 snaps, most during an eight-game stretch from Week 6 through 14 in which he also earned his first start, against Indianapolis. He played just one snap on defense in the playoff game against Baltimore.

It was quite the turnaround from his days at Oregon, where he started every game he played in for four years.

In the offseason, Chung took full blame for his lack of playing time and vowed that he would improve.

“I have to take responsibility for that. It’s just knowing your stuff. If you know your stuff, you’re gonna play.’’

Now, there’s no question he knows. Chung has started every game he’s played this year, and his offseason work is paying off. New England had success against Indianapolis in 2007 using Harrison in a hybrid linebacker role, and Chung could reprise that this week.

“You can have speed, size, and strength, but one thing you can’t teach is instincts. Chung has them,’’ Bruschi said. “He continues to remind me of a young Lawyer Milloy, making plays that a Patriots safety has to make.

“He is a very good open-field tackler, which you saw when he wrapped up Mendenhall. He was all over the field and if he stays healthy, this defense is going to be much better.

“In this defense, it’s critical to have a safety who can do it all. Milloy and Rodney Harrison were his predecessors. Chung has big shoes to fill, but I think he’s the guy to do it.’’