Coach happy, but not high on praise 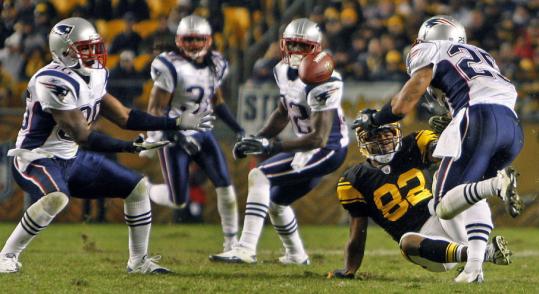 A pass toward Antwaan Randle El is broken up by Patrick Chung (right), and the ball deflected to James Sanders (left), who returned it for a TD Sunday. (Jim Davis/Globe Staff)
By Bob Ryan Globe Columnist / November 16, 2010

FOXBOROUGH — The man safely can say he’s seen it all, so don’t expect Coach Bill to get all gooey over his team’s stunning conquest of the Steelers.

He’ll leave the gushing, boasting, and prognosticating to Rex Ryan.

“That was a real solid effort [Sunday] night,’’ he said.

But is he proud and gratified after a game like that? Oh, absolutely. What motivates Bill Belichick as much as presiding over games is the study and preparation leading up to them.

All we see is the finished product. He sees something take place on the field on Sunday afternoon or evening and it takes him back to Wednesday, Thursday, or Friday, when he and his staff worked on something very specific in practice. We see a touchdown or sack and he sees someone — or many someones — executing an assignment. It’s not sexy, but it speaks to the essence of the sport. Very few plays on either side of the ball happen in a vacuum.

So don’t speak to him about Tom Brady’s 350 yards passing or Rob Gronkowski’s three touchdown grabs or Tully Banta-Cain’s big night rushing the quarter back, not that he couldn’t do a half-hour on each man’s performance. To him, Brady isn’t completing passes unless the protection is there, Gronkowski isn’t catching passes unless Brady is delivering the ball, and Banta-Cain isn’t making his presence known to the QB if the coverage behind him isn’t good. And none of it just kind of happens.

With the possible exception of Brady, Belichick doesn’t really like to dwell on individual performances. You’ve pretty much got to reach icon status.

So while it’s starting to become fairly obvious that Patrick Chung is on his way to becoming this team’s version of Bob Sanders, that is to say, an indispensable member of the defense who not only makes big plays, but whose very presence on the field has a residual effect on the others, Coach Bill will barely hint at such a thing.

“He’s a good football player,’’ acknowledged Belichick. “He does a lot of things. He has a lot of different jobs. He’s a valuable player for us.’’

That’s somewhat shy of saying that the Patriots are a very different defensive team with Chung in the lineup, but it’s a start.

The question du jour, of course, was what got into this team to create such a vastly different look from the week before.

“It’s all preparation and proper execution,’’ Belichick said with a shrug. “There was an alertness and an awareness. There were a lot of different situations in the game where I felt, from our viewpoint, that we executed very well.’’

He never mentioned the word “emotion,’’ even though his quarterback was channeling his inner Ray Lewis all night long.

But he did admit that some good had come out of the Cleveland game. Of course, he would never, ever employ the phrase “wake-up call,’’ or anything remotely close to it, but he did confirm that there were lessons to be learned and that his team had absorbed them.

“If we learn from out of that game and that loss there were things we could do better in future games that’s an unfortunate positive we can take from that game,’’ he said.

“Unfortunate positive.’’ That’s a phrase we all could embrace every once in a while, no?

For Bill Belichick, it’s all about team, first, last, and always. We still don’t know the details, and probably never will, but the reason Randy Moss is no longer here is because when Coach Bill evaluated the big picture, he came to the conclusion that this particular edition of the Patriots could not maximize its group potential if Moss were around. I mean, c’mon, all these experts and pundits solemnly pointing out how Moss “stretches the field,’’ as if Coach Bill didn’t know that. All we know is that the Patriots have lost one game since Moss departed, and his presence in Cleveland would not have altered that outcome.

Belichick is not infallible. I think the Patriots could use Richard Seymour, and Asante Samuel makes two. There were a couple of empty drafts. But one thing that never has changed is the idea that it’s always about a unit in which every man has his job, and if every man does his task well, good things will happen.

Asked, for example, about the success the Patriots had in neutralizing Pittsburgh’s vaunted running game, he never mentioned an individual.

“It’s about team defense,’’ he said. “If seven men do their job, and the eighth man doesn’t, that’s where the hole is and that’s where the runner will go. It’s a matter of getting to the man and then getting him on the ground.’’

What Coach Bill loves is that every week poses a new challenge. Ben Roethlisberger was a major issue last week, and Belichick is very happy go see him in the rearview mirror because, “he can keep a play alive as well as any quarterback in the league.’’ And now he is once again confronted with Peyton Manning, who may be the greatest quarterbacking machine the game ever has known. He’s nowhere near as elusive or physically imposing as the Brobdingnagian Steelers QB, but he proves every week he can make a 100-yard receiver out of a hat rack and bar stool.

Preparation has begun. “We’ll see,’’ said Coach Bill. “It starts all over. You prepare, and you hope to take advantage of the other team’s mistakes, and the one who does will come off the field victorious.’’

For all we know, there may even have been an unfortunate positive or two coming out of Pittsburgh.