Pittsburgh is all about aggression 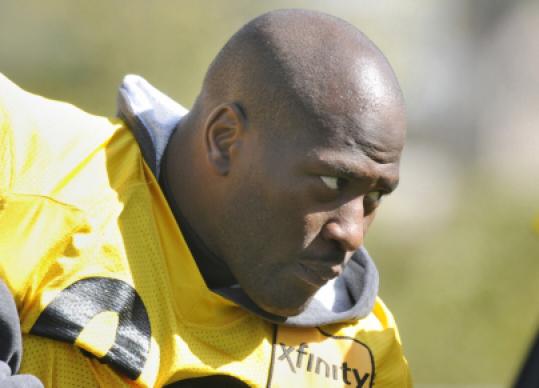 PITTSBURGH — Just the sound elicits a wince. The crunch of body on body, equipment on equipment, bone on bone, the sound of pain emanating from a violent meeting of two players. Watching it is no better — the collision about to happen, the potential for life-changing injuries. That last part has not happened, not yet, but still the hits keep coming, the fines keep coming, the Steelers defense keeps coming.

It is part tradition, rooted in Western Pennsylvania. It is part individual, the force brought by the addition of a James Harrison or a James Farrior or a Lawrence Timmons. It is all aggression, all toughness, all pain.

And to deliver the big hits, the blitzes and stops and fumble-in ducing crunches, that rank the Pittsburgh defense among the most ferocious and most feared in the league. The Steelers stand at the top of the NFL in points allowed per game, at 15.4, and are fourth in yards allowed, at 298.2. They have ridden that defense to a 6-2 record, and to predictions of greatness.

“That feeds into the whole game,’’ said Harrison of the trademark aggressiveness. “A guy coming across the middle is going to think twice about going up to catch the ball. He’s going to short-arm it, he’s going to alligator-arm it.

“You see it every week — a guy coming across the middle and he’s going to catch the ball and he sees the linebacker and throws his hands back down. That’s just part of the game.’’

Harrison has come under fire for some of the hits he’s delivered this season. He has seen his wallet lightened by $100,000 so far, though he is appealing two of the fines, including the $75,000 hit he took for an Oct. 17 collision with Browns receiver Mohamed Massaquoi.

He seems incensed by the issue, by the fines, and is perfectly willing to state his case in the middle of the locker room.

“I think that one was just totally unfair,’’ Harrison said, referring to the Massaquoi fine. “I think it was an overreaction by the league in response to what the media was saying at the time. They made a big issue of it.

“The way I look at that hit, it’s not a fine-able hit. It was circumstances, situation, everything lined up kind of right or wrong, however you want to look at it, for the fine to come down the way it did.’’

It’s still jarring, no matter how many times you’ve seen it — the heads meeting, the receiver left on the turf. And as much as Harrison defends himself and others may like the hit, there will be criticism, especially as the smashes keep mounting.

“We’re going to do what we’re going to do,’’ Farrior said, acknowledging that there is some gray area with such hits and such fines. “I don’t think our defense is going to change our mentality. It’s just that we have to play a little bit better within the rules. We all understand that. We all care about all the players’ safety.

“So that’s a big concern for everybody, not just us going out there and feeling like we’re being penalized. We want to take care of everybody, so everybody’s just got to use good common sense and good judgment.’’

And stop the run. That, deep down, is the foundation of the Steelers. As Polamalu said, “Given the way our run defense has been playing, it would be smart to attack us in [the air].’’

Pittsburgh is allowing just 58.2 yards per game on the ground, more than 20 yards fewer than the second-ranked Giants.

Not that everything is perfect. Farrior and Harrison cited the issues the team has had in stopping opponents in the fourth quarter. That was in evidence Monday night, when Cincinnati scored 14 points in the fourth quarter and came within a last-minute drive of erasing the Steelers’ 6-point lead. Pittsburgh hung on to win, but it wasn’t easy.

“We need to close out games,’’ Harrison said. “Not let teams back in when we have them down.’’

In the end, though, it is a small quibble with a defense that has led the Steelers to six wins in eight games, four of which were played without Ben Roethlisberger at quarterback.

“The success that we’ve been able to have?’’ Polamalu said. “Honestly, this team has been built on defense, and if the defense doesn’t perform, we’re not successful. That’s regardless of how the offense plays. That’s just my experience of it.’’

As Farrior said, “We expect it every year, to be a good defense and a hard-nosed, aggressive-playing defense. We expect that every year. That’s been a staple around the Steelers organization.’’

So the question remains: Where does that come from — from the players or the organization, from the system or the city?

“I guess that might just be the tradition,’’ Polamalu said. “It might the be tradition, one, of being a Steeler. It might also be the tradition of the culture, what the Pittsburgh culture is like, that blue-collar, hard-nosed, steel-mill guy that is working in a 2,000-degree furnace and in 10 degrees below zero, that kind of hard mentality. I think it’s an accumulation of all that.’’