Something flashy in store?

Browns offense a bag of tricks 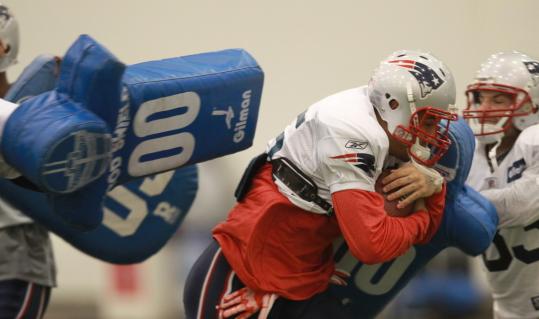 Aaron Hernandez (left) and Wes Welker tangled with each other and some pads at practice. (Barry Chin/ Globe Staff)
By Shalise Manza Young Globe Staff / November 5, 2010

FOXBOROUGH — It isn’t just Josh Cribbs’s ability as a kick returner that the Patriots have to worry about Sunday.

Cribbs, a former quarterback at Kent State, at times lines up in the Browns’ flash package (named after Kent State’s Golden Flashes), their version of the wildcat.

Cribbs has attempted two passes, both completions this season, and has 13 carries for 53 yards. It was while serving as a ball carrier against the Steelers last month that Cribbs suffered a concussion thanks to a helmet-to-helmet hit from James Harrison.

Patriots coach Bill Belichick knows that if Cribbs is in the game, Cleveland could use a play from the flash package.

“You’ve got to be ready for it, and how much they give you usually is a function of how successful it’s going.’’

While getting ready for the Browns, Patriots defensive players have become aware of the wrinkles of Cleveland’s offense.

“We’ve seen it on film; you never know,’’ cornerback Kyle Arrington said. “You’ve always got to prepare for it, so that’s what we’re doing. If they show it, we should be ready.’’

And it isn’t just Cribbs who gets in on the act. During the Browns’ win in New Orleans two weeks ago, running back Peyton Hillis completed a 13-yard pass to quarterback Colt McCoy on third down.

“That was quite a play, wasn’t it?’’ Browns president Mike Holmgren said this week. “When [McCoy] caught it and he got up, I was very, very happy because that kind of sealed the deal.

“We used to throw passes to [quarterback] Seneca Wallace when he was a starter for us [in Seattle] my last year there.’’

After McCoy’s catch, the Browns went on to kick a field goal and take a 13-point lead with a little less than six minutes to play.

Let’s face it
Logan Mankins made it through his first day back at practice Wednesday, though yesterday the Patriots were in full pads after working out in shells the day before.

His teammates were happy to have the two-time Pro Bowl guard back, and a few were also impressed with his grooming.

Several members of the offensive line have creative facial hair — tackle Matt Light joked this week that he has a hot dog and some spare change hiding in his overgrown beard — and Mankins returned with a Fu Manchu-style moustache.

“It’s great, it’s better than I can do,’’ said Dan Connolly, who has been playing in place of Mankins at left guard.

Light called it a “thing of beauty. I’m impressed. I’m humbled by it.’’

Smith, players to meet
NFL Players Association executive director DeMaurice Smith will be here Thursday to meet with the players, according to Light, the Patriots’ union representative.

The meeting was rescheduled from late September, as Smith traveled to the funeral of Broncos receiver Kenny McKinley on the day he intended to be at Gillette Stadium.

The move to decertify, or disband, the union means players could sue the NFL for violating antitrust laws if there is a lockout.

Pryor not fined
According to a league source, defensive lineman Myron Pryor was not fined for his hit on Vikings quarterback Brett Favre last Sunday. Former NFL head of officiating Mike Pereira, writing for FoxSports.com, said Pryor’s hit, which knocked Favre out of the game and required him to have several stitches in his chin, was legal . . . Aaron Hernandez returned to practice, a day after sitting out for what were termed “non-football-related’’ reasons. Fred Taylor (toe) and Jarrad Page (calf) again sat out practice, which was held inside the Dana-Farber Fieldhouse because of the weather. Deion Branch (hamstring), Patrick Chung (knee), and Matthew Slater (ankle) were limited . . . At Browns practice, quarterbacks Jake Delhomme (ankle) and Wallace (ankle) were joined on the sideline by defensive end Kenyon Coleman (knee). Coleman had been limited Wednesday . . . Light’s foundation is raffling off four tickets to the Patriots-Colts game Nov. 21, with an opportunity to meet Light, Tom Brady, and Wes Welker. Visit www.netraffle.org for details.

Monique Walker of the Globe staff contributed to this report.