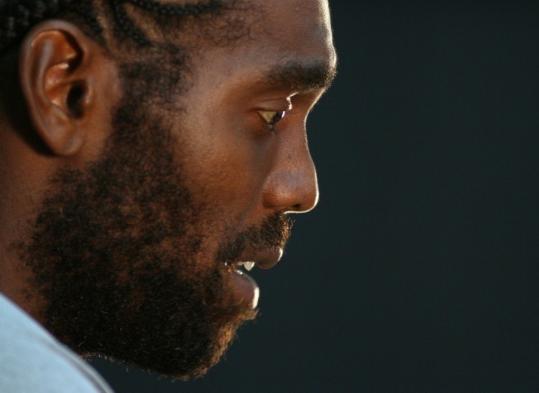 The agent for Randy Moss (above) said the wide receiver is excited to get back to football and is eager to join the Titans. (File/Getty Images)
Associated Press / November 4, 2010

The Tennessee Titans passed on wide receiver Randy Moss once before, back in the 1998 draft. Not again.

The Titans claimed the controversial Moss off the waiver wire yesterday, choosing not to take any risks with receiver Kenny Britt missing at least one game with an injured right hamstring.

Tennessee, then the Houston Oilers, drafted Kevin Dyson with the 16th pick overall in 1998. They passed on Moss and said then it was because of concerns about his character. Coach Jeff Fisher, speaking three hours before yesterday’s waiver deadline, said the personnel department decided Dyson was a better fit.

“Randy has had a terrific career. He’s a Hall of Fame receiver. You don’t always make the right decision,’’ Fisher said. “The draft is an imperfect science. We’ve had No. 1s that haven’t panned out for us before.’’

Now the Titans are 5-3, a half-game back in the AFC South with five divisional games remaining down the stretch. Fisher said in a statement after the Titans were awarded Moss that the receiver offered an opportunity to upgrade their offense.

“Randy has been a tremendous threat wherever he has been,’’ Fisher said. “We will bring him up to speed as quickly as possible.’’

Moss can help a team that has not won a playoff game since January 2004, and Fisher said Britt, who hurt his right hamstring in last week’s 33-25 loss to San Diego, will miss the Titans’ game Nov. 14 at Miami.

How quickly Moss joins the Titans remains to be seen. They are on their bye week and hold their last practice today before breaking for the weekend.

Moss’s agent, Joel Segal, said, “Randy’s excited to get back playing football. He’s ready to go and looking forward to getting there.’’

The coach of the team that waived Moss, Brad Childress of the Vikings, said yesterday that the Oct. 6 deal in which Minnesota acquired Moss from the Patriots for a third-round draft choice was “a poor decision.’’

Childress spoke two days after deciding to cut Moss less than a month into his second stint in Minnesota. He declined to answer repeated questions about the specifics of the decision, including the motives behind it and whom he consulted.

Vikings owner Zygi Wilf, who signed off on bringing Moss back to Minnesota and increasing the team payroll by about $5 million, has declined comment.

Childress is also getting heat for the way the transaction was handled.

“I have to answer for my decisions,’’ he said. “With ownership, obviously, my name is affixed to wins and losses.’’

The latest mess comes on top of a 2-5 start for a veteran team that expected to make a run at the Super Bowl.

The Vikings lost three of the four games Moss played in, and his antics in the locker room and during a postgame rant to the media only made the situation worse.

Moss first raised some eyebrows in the Vikings’ locker room last Friday when he berated a caterer who brought in food for the team after practice.

“I wouldn’t do it,’’ Vikings quarterback Brett Favre said. “I was sitting in my locker eating the food. I thought it was pretty good.’’

Moss also showed little effort to catch a pass near the end zone in the loss to the Patriots Sunday, but the final straw may have come after the 28-18 loss.

Moss gave a rambling statement to the media, gushing with praise for coach Bill Belichick and the Patriots and criticizing Vikings coaches for not listening to his input during the week.

“It didn’t work out. When things don’t work out, you need to move quickly to take steps,’’ said Childress.

Favre said he and most of the players on the team were “a little bit shocked’’ when Childress informed them Monday that Moss would not be back. But he also said support for the team “never wavered.’’

The Vikings yesterday said wide receiver Sidney Rice, who has been recovering from hip surgery in late August and whose absence may be one reason the Vikings brought Moss on board, has been taken off the physically unable to perform list, allowing him to return to practice.

The team has up to three weeks to evaluate Rice’s progress before determining whether to put him on the active roster.

Also, wide receiver Percy Harvin was held out of practice yesterday because of a left ankle sprain suffered Sunday. His status for this week’s game against Arizona is uncertain.

Favre was on the field yesterday but didn’t participate in drills. He said he passed his precautionary concussion tests following a hit from Patriots defensive tackle Myron Pryor Sunday that bloodied his chin and knocked him out of the game.