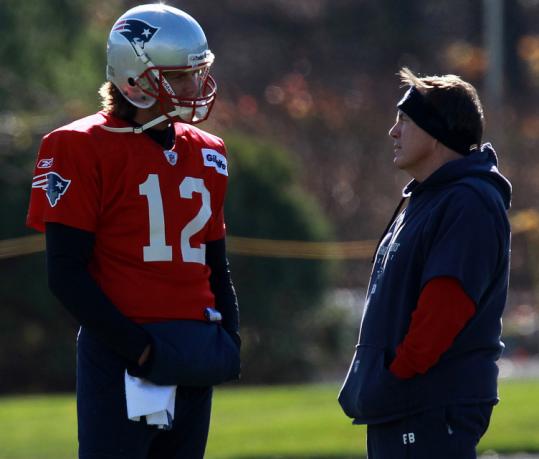 FOXBOROUGH — With quarterbacks Jake Delhomme and Seneca Wallace nursing sprained ankles — both were unable to practice yesterday — it appears that rookie Colt McCoy will make his third straight start for Cleveland when the Browns host the Patriots Sunday.

In his first two starts, road games at Pittsburgh and New Orleans, McCoy was a combined 32 of 49 for 355 yards, one touchdown, and two interceptions. He has been sacked six times.

Aided by a big halftime lead and four interceptions from his defense, McCoy attempted only 16 passes against the Saints.

Given the situation, the powers that be in Cleveland are pleased with how the former Texas Longhorn has responded.

“I think you couldn’t probably, as a youngster, go into two tougher situations,’’ said Browns president Mike Holmgren. “When you look at young quarterbacks, what I’m trying to ascertain is his ability to handle the game, handle the situation he’s in. Does he make good decisions? Does he panic? How are things working? Not necessarily, does he complete that ball?

“Before anyone anoints anybody, he’s played two games. I told him I was proud of him and I think he can build on this.’’

Coach Eric Mangini believes McCoy had a difficult transition from Texas — where he was a four-year starter and a star — to bottom of the depth chart in Cleveland, but was able to overcome his lack of practice reps and NFL game experience quickly.

“When he got the opportunities with the two injuries, it felt very comfortable for him. He didn’t really miss a beat,’’ Mangini said. “That was really positive to see, from my perspective.

“A lot of young guys when they go in, there’s real jitters. But Colt, with that role, just seemed at home: broke down the teams, spoke to the team the night before he started. It was natural. None of it was forced.’’

McCoy’s performances are more impressive when you consider that Holmgren told McCoy when he was drafted that he wouldn’t be playing his rookie season and instead would learn from Delhomme and Wallace, the veterans in front of him.

But Delhomme sprained his ankle the opening week, putting Wallace in the starting spot — until he was hurt in Week 5, also spraining an ankle. Delhomme came in, aggravated the same ankle, and it became McCoy’s show.

McCoy said he had prepared for each game of the season as if he would play, and when Delhomme and Wallace both went down, he felt that made it a bit easier when he was thrust onto the field.

While Holmgren and Mangini are pleased with his performance to this point, McCoy is facing a tough challenge; rare is the young quarterback who excels the first time he faces a Bill Belichick offense.

Teachable moments
Sammy Morris has seen his snaps with the offense decline in recent weeks, but he has been mentoring young running backs BenJarvus Green-Ellis and Danny Woodhead — even as their success seems to take chances from him.

“Heck yeah, he’s done a great job,’’ said position coach Ivan Fears. “You’re talking about a guy that’s not getting a lot of opportunities that’s standing up strong for the team. He’s a hell of a team player, no doubt about it.

“Any great player wants the ball. That’s the nature of the game. When you’re not getting a lot of opportunities and can still be able to stand in there and still be a team player? You have to appreciate that and we appreciate a guy like Sammy.’’

With only 11 carries this season, mostly in third-and-1 or fourth-and-1 situations, the 33-year-old Morris likely will wind up with his fewest touches since joining New England in 2007. Fears said things can change, that the Patriots could call on him at any point, but over the last month, Morris’s time has come almost exclusively on special teams.

But that doesn’t mean he can’t help Green-Ellis and Woodhead.

“It’s just the way things go,’’ Morris said. “Even if I was more in the offense, I’d still be doing those things. It’s really just part of who I am as far as trying to teach what I know, what I think.

“If it’s something I’ve seen or done before, it’s natural to help out and speak up when I see something.’’

Morris also runs the backs’ blitz pickup meeting on Thursdays, pointing out tendencies and nuances to his younger teammates on film.

Don’t ask, don’t tell
Randy Moss ended up going to Tennessee via waivers yesterday, but before the move was complete, Tom Brady was asked if he would welcome the receiver back to New England. “Would I welcome him back? You can ask Coach [Bill] Belichick,’’ said Brady. “I don’t make the decisions around here. If I did, Lawyer Milloy would still be here and Deion [Branch] never would have left. Whatever I want doesn’t happen anyway, so I just try to keep my mouth shut.’’ Asked for his thoughts on Moss’s situation, Brady said he had some but didn’t really care to share them.
Three outs
Three Patriots did not take part in practice: tight end Aaron Hernandez (not injury-related), safety Jarrad Page (calf), and running back Fred Taylor (toe). Branch (hamstring), safety Patrick Chung (knee), and wide receiver Matthew Slater (ankle) were limited. The Patriots held practice on the upper fields behind Gillette Stadium . . . Cleveland listed five players as not practicing, including Delhomme, Wallace, and defensive tackle Shaun Rogers (ankle) . . . The Patriots shuffled their practice squad roster, signing quarterback Jonathan Crompton, a rookie out of Tennessee who was drafted by the Chargers but released in September, and defensive lineman Lorenzo Washington, a rookie out of Alabama who spent some time with the Cowboys in training camp. Wide receiver Darnell Jenkins (knee) was placed on the practice squad injured list.