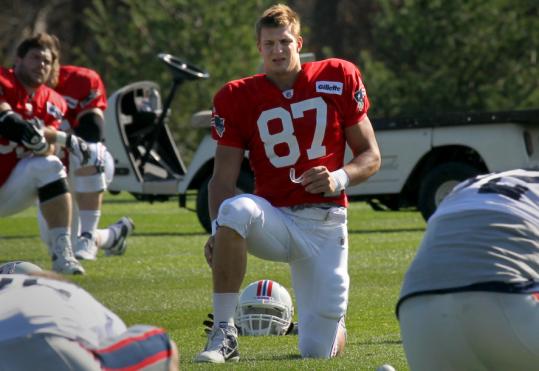 Patriots tight end Rob Gronkowski is adamant in his belief that it doesn’t matter where a player is drafted, it’s how he performs on the field. (Bill Greene/Globe Staff)
By Shalise Manza Young Globe Staff / October 31, 2010

FOXBOROUGH — This began as a story about Rob Gronkowski, the Patriots’ super-sized rookie tight end. But it turns out it’s impossible to talk about Rob without talking about all of the Gronkowski boys.

All five of them.

Gordie, the oldest, is the only one of the boys who never really played football; he was the baseball star, a corner infielder drafted by the Angels in 2006 who played this year with Worcester of the Can-Am League and the Frontier League’s Gateway Grizzlies.

Dan, the second Gronkowski son, is a tight end with the Broncos, having been traded to Denver by the Lions this season. Middle son Chris is a Cowboys fullback. And the youngest, Glenn, is a high school senior being recruited by Arizona, Kansas State, and Buffalo to play baseball and football.

Rob — parents Gordon and Diane call him Robbie — came fourth and is the biggest, at almost 6 feet 7 inches and 265 pounds. Diane said he was her “German shepherd puppy,’’ with huge hands and huge feet, and a thick neck.

Gordon said Rob was also the scrappiest, outlasting his brothers in their frequent fights around the house.

The garden-variety soccer mom has nothing on Diane Gronkowski. For more than 20 years, she was a stay-at-home mom, though she rarely was home (Diane and Gordon divorced when Rob was around 17).

When the kids were youngsters, she was behind the wheel of her van, shuttling the boys and many of their teammates to practices and games, for town and travel teams. Diane made sure to get the oil changed religiously on the van. Once, she went back to the service center and the mechanic asked if something had gone wrong. No, Diane answered, she’d just put 3,000 more miles on the odometer in three weeks and needed another oil change.

During hockey season, Diane would be up just past 4 a.m. on weekends for practices that began at 4:50 at the rink near their Buffalo-area home. She’d be back home before the sun was even up, one practice down, more to go. Throughout the day she went back and forth.

Spring meant baseball. One year, Gordon recalls, the boys had a total of 16 tournament games in one weekend; he saw half of those games, Diane the other half.

And, of course, fall was for football. Gordon was a three-year starting offensive lineman at Syracuse, but he wouldn’t let the boys begin playing until they were in middle school, fearful of them burning out.

Dan and Chris excelled at the sport, but Rob was a bit different. Not just for his size, but because of his flexibility and speed.

Gordon knew early on Rob had the goods to play in the NFL.

“I knew it probably in high school,’’ he said. “He was so big and agile and fast. He would just run people over.’’

In his senior year, scouting services had Rob ranked as the No. 1 or No. 2 tight end prospect in the country — with his current teammate, Aaron Hernandez, then a schoolboy in Connecticut, ranked either right in front of him or right behind.

Rob decided to head to Arizona, and roomed with Chris; though they had fought the most growing up, the two became best friends. But Rob’s promising career with the Wildcats — he was a first-team All-Pac 10 pick as a sophomore — was cut short when he underwent surgery for spinal stenosis and a bulging disk early in his junior season, before being able to play in a game.

Rob underwent surgery and rehab, and despite not playing a snap in a year, decided to enter the NFL draft.

A decision others may have considered risky wasn’t to Diane; she was confident Rob would make the best decision for himself. Rob considered returning for his senior season, but the pull of the NFL was too much to resist.

“I definitely considered it. Arizona’s a great place, I miss it a lot,’’ he said. “Great organization, great football team. But it was an opportunity; I always wanted to play in the NFL, and I had a dream. And also, my brothers were in the NFL, so I wanted to be up there, too.’’

There were red flags about his health, but through the scouting combine and pre-draft process, Gronkowski showed that he was as good as new. The Patriots made him the 42d overall selection, setting off a Gronkowski celebration at Radio City Music Hall, where the entire family had gathered, invited by the NFL.

Only the celebration happened a day later than had been anticipated.

“To be truthful, we thought he was going higher — we had him holed at Baltimore,’’ Gordon said. “But Denver traded [with the Ravens] for Tim Tebow and used No. 25. That’s when things got crazy.’’

Thanks to the league’s new three-day draft, with only Round 1 on the first night, the Gronkowskis had to wait until the next day to hear Rob’s name called. When it was, cameras captured the brothers dancing, and Rob hugged NFL commissioner Roger Goodell when he went on stage for a photo opportunity.

It was a joyous moment, to be sure, one Rob calls “awesome,’’ but it was only the beginning.

“Once you get picked, it’s just the greatest thing. But the draft doesn’t really matter,’’ he said. “You’ve got to prove no matter what that you can play.

“So whatever round you go, drafted or undrafted . . . if I was doing absolutely terrible, I wouldn’t be playing at all. If I was a free agent and doing what I’m doing now, I’d be playing this same role, so it’s all what you make of it.

He has proven himself. Gronkowski was practicing with the first-team offense almost immediately during spring camps, and it soon became clear he could be a red-zone threat for New England.

It wasn’t easy, however. Learning the Patriots playbook took some doing, and every day is a process, one aided by veteran Alge Crumpler.

“Captain Crump has helped me a lot,’’ Rob said with a smile. “He’s helped me a lot on the routes, on the blocking, he keeps me focused. I look up to him. He’s a great leader.’’

For Crumpler, who went to multiple Pro Bowls as one of the best pass-catching tight ends in the league, the sky is the limit for Gronkowski.

“The thing about Rob is, if he doesn’t overthink things, there’s absolutely nothing that he can’t do for the tight end position,’’ Crumpler said. “When he knows who to block, he dominates them. When he knows what route to run, he makes a big play. So it’s fun to watch him evolve and grow every football game.’’

As Rob improves and his brothers try to contribute to their respective teams, Diane has traded in her van rides for airplane trips. This weekend was the first she’s spent at home in two months. She has been flying to New England, Detroit, Denver, and Dallas since late August, catching Glenn’s final high school games as well.

And three or four years from now, there might be yet another Gronkowski brother in the NFL, or on a minor league baseball field.

Shalise Manza Young can be reached at syoung@globe.com.