Following arrest, he drives off cliff 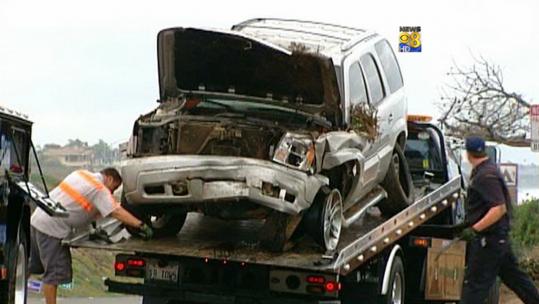 Junior Seau’s Cadillac SUV was found on the beach about 100 feet below the roadside in Carlsbad, Calif. Seau earlier had been arrested on suspicion of domestive violence. (Kfmb-Tv/Associated Press)
Associated Press / October 19, 2010

CARLSBAD, Calif. — Former Patriots linebacker Junior Seau drove off a cliff and was hospitalized with minor injuries yesterday, less than nine hours after he was arrested on suspicion of domestic violence.

The 12-time Pro Bowler’s white Cadillac SUV was found on the beach about 100 feet below the roadside, said Carlsbad police Lieutenant Kelly Cain. Cain said it wasn’t a sheer cliff, but was a significant, rough slope. Seau was taken to Scripps La Jolla Hospital in San Diego.

Police told the Los Angeles Times in a statement that “it is believed that Seau fell asleep at the wheel.’’

Cain said that the lack of skid marks leading up to where Seau plunged off the cliff was consistent with the idea that he fell asleep.

Police said there’s no sign that alcohol or drugs was involved.

Seau’s 25-year-old live-in girlfriend told authorities that Seau assaulted her during an argument Sunday night at his Oceanside home, according to Oceanside police. She appeared to have minor injuries and did not require medical treatment.

Seau, 41, was arrested outside his home about two hours after police arrived. He wasn’t home when authorities arrived but they asked him to return when he called his girlfriend.

Seau posted bail and was released from the San Diego County jail in Vista.

“At this point we think he’s fine but we really don’t have any comment,’’ said Richard Doan, who answered the cellphone of Bette Hoffman, who works for Seau’s foundation. “There are no injuries but he seems to be a little shaken up.’’

Seau was a star linebacker with the University of Southern California before going to the Chargers with the fifth pick overall in the 1990 draft.

He left football briefly in August 2006 after 13 seasons with San Diego and three with Miami. He signed with the Patriots four days later and started 14 of the 27 games he played for them over two seasons.