Buildup to the breaking point 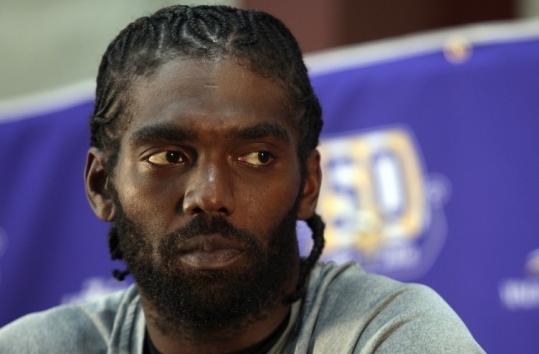 Randy Moss had reason to believe as far back as February that 2010 would be his last season in a New England uniform. (Adam Bettcher/Getty Images)
By Shalise Manza Young Globe Staff / October 10, 2010

Last February, when Randy Moss told reporters in Florida that he expected this season to be his last with the Patriots, the comment seemed to come out of left field. Fitting, since he was talking at former teammate Heath Evans’s charity softball game.

But according to a source close to Moss, the receiver already had been told by coach Bill Belichick that he wasn’t part of their future plans.

As is the case in the breakup of many marriages, the divorce between Moss and the Patriots — which seemed to happen swiftly last week, when the 33-year-old receiver was sent to Minnesota for a third-round draft pick — actually had been coming for some time.

Despite the knowledge that his days with the Patriots were numbered, Moss’s offseason workouts were as tough as ever and he reported to training camp as fit as he had ever been. Some teammates even claim he was faster.

During camp, the source said, Belichick reversed course. As the team stretched one day, the coach approached Moss about starting talks on a new deal.

Moss, however, told Belichick it wasn’t the right time, that they could talk after the season. Around that time, the source indicates, Moss began to believe that he would be traded before the season began.

Perhaps that day, that exchange with Belichick on the fields behind Gillette Stadium, was the final straw. Or maybe it was the night of the team’s Kickoff Gala, when Moss spurned autograph-seekers and those fans he was assigned to sit with, all of whom paid thousands of dollars for the right to rub elbows with their favorite football players.

Instead, the mercurial Moss sat alone near a table laden with auction items, nodding his head to the music flowing through his trendy Beats by Dre headphones.

Team owner Robert Kraft may have considered it a slap in the face when word got back to him; the gala is one of the largest fund-raisers for the team’s charitable foundation and one of the few non-football events players are required to take part in.

Or maybe the push for New England to finalize the divorce came about two weeks later, when Moss finally broke his months-long silence with a stunning and sometimes confusing stream-of-consciousness press conference moments after an impressive opening day win over the Bengals.

While it was natural to think the Patriots brass was unhappy with Moss’s comments, a short time later it was leaked that he did the “post-victory breakdown,’’ a tradition begun by Tedy Bruschi. Video shows a shirtless Moss, grease paint still under his eyes, gathering all of the players and coaches and yelling, “How do we feel about getting the first victory of the season?’’ They replied, “Awww, yeah!’’

In retrospect, the Patriots, a public relations-savvy team, may have done that as a means of showing the league that Moss was still a team player, still a respected leader despite being stripped of the captaincy he had held the previous two seasons.

Less than a month after his very public therapy session and that jubilant locker room moment, Moss was gone — as he called it, “back home’’ with his first NFL team.

Perhaps not coincidentally, that’s when the stories began to filter out that Moss had become a problem. But teammate after teammate, on and off the record, asserted that the wideout never had been a distraction. Players on offense and defense, starter to practice squadder, shared stories of how he had offered advice on issues on and off the field.

Among those he suited up with every week, he was almost universally beloved. With those outside the locker room, it was a different story.

A match with Minnesota
New England and Minnesota had been discussing a trade for a couple of weeks. Moss’s unrest, combined with the Vikings’ need for a downfield threat and the long-held mutual admiration between Moss and Minnesota quarterback Brett Favre, made it a natural match.

The Vikings’ young standout receiver, Sidney Rice, surprised the team with his decision to undergo microfracture hip surgery in August. Though the original timeline Minnesota had for Rice’s return was eight weeks, patients who undergo that surgery must be on crutches for that long, unable to put their full weight on the joint.

Armed with that knowledge, New England was able to ask for higher compensation from the Vikings in exchange for Moss. At 1-2 and with its offense struggling, Minnesota acquiesced last week. Had Moss left the Patriots via free agency after the season, they would have gotten only a fifth-round compensatory pick.

Thursday morning, amid stories that Moss and offensive play-caller Bill O’Brien had had words at halftime of last Monday’s game in Miami, and that Moss and Belichick had had some sort of incident on the plane ride home, Belichick surprised media members by holding a brief press conference in which he asserted that he enjoyed Moss’s time in New England and that he never had a problem with Moss.

Left out was whether Moss had indeed had differences with O’Brien — the source close to Moss said the player and coach never saw eye-to-eye, citing personality differences — and the incident last December in which Moss and three other Patriots were sent home for the day after being late to a team meeting because of a snowstorm.

Three of those four players — Moss, Adalius Thomas, and Derrick Burgess — have been sent packing. Only Gary Guyton remains.

He’s history
In his press conference in Minnesota, Moss said he was more hurt by the trade that sent him from the Vikings to Oakland in 2005 than he was by the Patriots’ move, and he spoke highly of Belichick and credited New England with giving him a chance when others believed he had little left to offer.

Moss arrived in New England in 2007, unloaded by the Raiders for what is now considered the bargain-basement price of a fourth-round pick. He was coming off the worst two seasons of his career, hampered by hamstring issues and being part of a team that simply wasn’t very good.

On a conference call with Patriots reporters when the deal was done, Moss said he was “in awe’’ of being part of the New England organization.

Soon thereafter, it was his new teammates and coaches who were in awe as they saw Moss make jaw-dropping catches with regularity on the practice field.

In the fall, the awe struck Patriots fans. In his first game, having been held out of the preseason with a slight hamstring problem, he made a spectacular 51-yard touchdown reception at the Meadowlands, splitting three Jets defenders.

It was the first of 23 touchdowns Moss would pull in that season, a record-setting performance that included a four-score performance in Buffalo and one perfect grab against the Giants in Week 17 that brought him No. 23 and Brady his 50th.

After Moss took a significant pay cut to join the Patriots, the team rewarded him with a three-year, $27 million extension early in 2008. He reportedly left more money on the table from the Eagles to remain with Brady in New England.

He continued to produce, and played all 17 games last season despite injuries to both his shoulder and back. In three-plus seasons with the Patriots, Moss never missed a contest.

From the outside, the marriage looked happy. Until it became crystal clear, on Wednesday morning, that it was not.