Green-Ellis ready if he gets the call 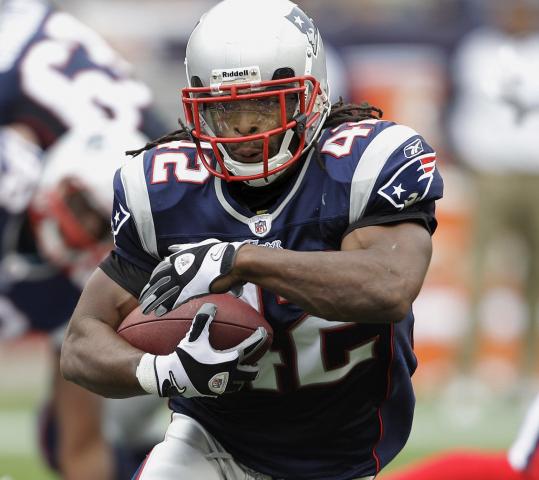 BenJarvus Green-Ellis didn’t touch the ball until late in the first half last Sunday, but he got rolling for 98 yards on 16 carries. (Stephan Savoia/Associated Press)
By John Powers Globe Staff / October 4, 2010

FOXBOROUGH — He was dubbed “Law Firm’’ soon after he hung out his shingle in the home locker room but BenJarvus Green-Ellis knew then, as now, that he’d merged with a larger and decidedly volatile partnership. What was Morris, Faulk, Jordan, and Maroney when Green-Ellis arrived here two years ago has morphed through attrition into Morris, Woodhead, Clayton, and Green-Ellis.

So with Fred Taylor out with a toe injury, who’ll be the starter against the Dolphins tonight in Miami? “I don’t know,’’ said Green-Ellis, who rushed for 98 yards and a touchdown on 16 carries against Buffalo last time out. “Just taking it one day at a time and whatever happens, happens. Just be ready for everything.’’

That’s been his approach since he arrived here as an undrafted free agent and had to settle for spot duty after being the main man for four years at Indiana and Mississippi. “Just string days together, one at a time,’’ said Green-Ellis.

Even now at 25 he’s still the junior partner among the established veterans. Taylor and Kevin Faulk are 34 years old and Sammy Morris is 33. Yet even though Green-Ellis has started only three games in his three seasons as a pro, he has been part of a winning team for the first time since high school. His college varsities went 12-35 and never came close to a bowl game. Yet Green-Ellis’s discipline, focus, and commitment remained unshaken throughout.

Those values had been drilled into him by his family and by St. Augustine, the all-male, all-black Catholic high school that used a wooden paddle to reinforce its lesson plan. “It’s really strict here,’’ said Tyrone Payne, who coached Green-Ellis. “A little shoelace not tied becomes a big issue. But Ben fell right in line.’’

Playing football at a school that has produced several dozen NFLers, including Carl Weathers (a.k.a. Apollo Creed), had its benefits. “We always recruited there,’’ said Gerry DiNardo, the former LSU coach who kept mining the Purple Knights for talent even after he moved on to Indiana in 2002. “If you recruit Louisiana, you recruit St. Aug.’’

Green-Ellis could have gone to Florida State or anywhere in the Southeastern Conference but he opted for Bloomington, where the Hoosiers were coming off a 3-9 campaign and hadn’t had a winning season since 1994. He felt comfortable with DiNardo, who’d coached for five years in Baton Rouge. “I understood the world that he had come from,’’ said DiNardo, “and I don’t think many people did.’’

The prospect of playing immediately for a rebuilding program that needed a workhorse back also was an attraction. “I think Ben felt like he was a big part of the solution,’’ said DiNardo, now an analyst for the Big Ten Network. “He knew he would be an integral part of what we were doing.’’

Indiana went 2-10 in 2003 and placed just above Illinois at the bottom of the conference. Yet while the Hoosiers finished last in total offense they were fifth in rushing thanks to a steady and sturdy output from Green-Ellis, who gained 938 yards on 225 carries and ranked third in the conference standings. After IU went 3-8 and 1-7 in the Big Ten the following year DiNardo was gone and so was Green-Ellis, off to Ole Miss. Though he became the first back in more than a half-century to post back-to-back 1,000-yard seasons in Oxford, the Rebels lost 17 games in his two years there and in 2007 went winless in the SEC for the first time since 1982.

In a year in which 23 running backs were selected, Green-Ellis went untaken even though he had five 100-yard games and made first-team All-SEC. While he received rave reviews for his work ethic and character, he’d been considered more plow horse than show horse. “We had him as a fifth-sixth round prospect,’’ recalled Todd McShay, ESPN’s draft analyst. “The biggest thing was his lack of elusiveness and explosiveness. But he was physical, read blocks well, and hit holes hard. He did all the little things, and he had a mean streak.’’

The Patriots saw enough of the essentials in Green-Ellis to sign him as a free agent but with three running backs returning from a Super Bowl team that had gone 16-0 during the regular season, the quiet new guy ended up on the practice squad where he made an immediate impression. “Very quiet guy, willing to learn, very good work ethic,’’ said Faulk, a fellow Louisiana native. “You could see that in him. You could just tell he was a football player.’’

Faulk knew Green-Ellis’s father but was only familiar with the son from watching him play on TV. What struck him was Green-Ellis’s enthusiasm for working diligently while he was waiting for his chance. “I always tell his mom, his dad, his grandmother, his grandfather that they did a wonderful job with BenJarvus,’’ Faulk said. “Anybody in this locker room will tell you he’s a great person. He’s mature beyond his years. He understood what he had to do and what was his role at that time. He was prepared for it.’’

It wasn’t that Green-Ellis didn’t realize what he was signing on for when his agent suggested New England. He could read a depth chart as well as anyone. But he knew that there are only two kinds of football players in a league with 53-man rosters — those who are playing and those who need to be ready to jam on a helmet at a coach’s nod. “I just try to take care of things I can control and that’s going out there on the football field and performing,’’ Green-Ellis said. “Offense, special teams. Get the job done, whatever it takes.’’

His moment came during his rookie year when he was activated for the fifth game after LaMont Jordan had injured a calf and Laurence Maroney was nursing an injured shoulder that soon ended his season. Green-Ellis went in near the end of a humiliating night in San Diego and gathered in a pass. He scored four touchdowns in the next four games, inheriting the starting job when Morris hurt a knee. Then he didn’t get a carry for the final four weeks. “I thought, those guys must be some bad boys up there,’’ recalled Payne, “because Ben’s not playing.’’

Last year when Maroney returned and Taylor signed on as a free agent Green-Ellis was back to spot duty, playing on special teams and getting only 26 carries and was inactive for the playoff game against Baltimore. This year he again had to fight for a roster spot but when the fragile Maroney was dealt to Denver last month and Faulk went down for the season with a torn ACL, Green-Ellis was back in business. “You always have to be prepared,’’ he said. “You never know what’s going to happen. It’s a physical sport that we play. Whatever you can learn, just learn it. Whatever experience you can get, just take from it.’’

Such is the reality of committee-style running where the members are in transition not only from season to season and game to game but from down to down, especially in the Patriots’ impromptu offensive system. “Historically, we’ve been a game plan team,’’ said player personnel director Nick Caserio. “We’ll go into each week and figure out what different packages, what different things, we can do against our opponent.’’

More often than not Green-Ellis is going to be called upon at some point every Sunday because of his reliability and adaptability. “Benny is a good, solid back,’’ said coach Bill Belichick. “I think he does everything pretty well. He runs, obviously. He can pick up the blitz, catch the ball. He plays solid for us in the kicking game. He can really help us on all four downs.’’

But Green-Ellis’s specialty still is what it was in college. North-south, lower-the-shoulder, move-the-chains running. “There’s not a lot to hit on him out there,’’ said quarterback Tom Brady. “Even when he gets hit he might get bounced around but he has good balance so he’s able to fall forward.’’

Even when he wasn’t playing, Green-Ellis was taking notes about how his colleagues went about their work. His study habits went unnoticed by the NFL clubs that bypassed him in 2008. “He’s always taking in information and processing it,’’ said DiNardo. “I don’t know how you would see that at a combine.’’

Much of what Green-Ellis has learned here has come from watching his fellow partners and synthesizing their styles. The collegian who was considered a productive bump-and-grinder has evolved into a renaissance performer as a professional. “We’re all different running backs, we all have different styles, we all have different mentalities,’’ said Faulk. “Ben has all of ours. He can run over you. He can outrun you. He can make you miss. He has great balance. He has all of that, and that’s what makes him who he is.’’

Green-Ellis’s versatility has made him valuable in an offense that features not only a variety of running backs but also four receivers and a couple of rookie tight ends in constant rotation. “We line up in different spots a lot, we do a lot of different things,’’ said Green-Ellis. “It’s fun, but you also have to get ready for the mental challenge of knowing where to line up.’’

From one week to the next, he never knows what his workload will be. Against the Bills Green-Ellis didn’t touch the ball until late in the first half. Then in the fourth quarter he got the call on six of seven plays, including the 7-yard touchdown that put the Patriots ahead, 38-23, and carried the ball four straight times in the final three minutes to lock the game down. “When you’re trying to get those kinds of drives to win the football game,’’ said Dolphins coach Tony Sparano, “it looks like he’s the kind of guy that can do that for you.’’

For eight years before he turned up at Gillette Stadium Green-Ellis owned that job. Now, through persistence and circumstance, he may have earned it again. Maroney is in the Rockies, Faulk is on the shelf, Taylor is hurt. Danny Woodhead, who was waived by the Jets, and Thomas Clayton, who was cut by the Patriots in camp, are his latest confreres.

So what’s Boston Legal’s role likely to be amid all the masthead reshuffling? Who knows? “I just want to go out there whenever I have an opportunity,’’ Green-Ellis said. “Help and contribute. That’s what I want to do.’’