Arrington’s work starting to pay off 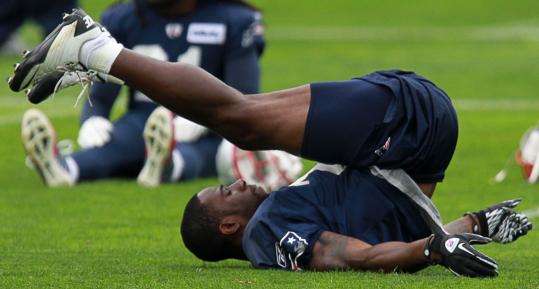 Cornerback Kyle Arrington would bend over backward to remain a starter for the Patriots. (Jonathan Wiggs/Globe Staff)
By Monique Walker Globe Staff / October 2, 2010

FOXBOROUGH — The path from Hofstra University to Kyle Arrington’s first NFL start was one of convoluted transactions and short playing stints over the course of two years.

Along the way, the Patriots cornerback remembered his father’s words of encouragement to keep “chipping away.’’ Last week, Arrington made his first NFL start, but it remains to be seen if he did enough against the Bills to retain a prominent role Monday night against the Dolphins in Miami.

Coach Bill Belichick opted for Arrington over Darius Butler last week, but Belichick wouldn’t give anything away about how he plans to line up certain players this week.

Special teams have been Arrington’s specialty since he arrived in New England last season. The Patriots signed Arrington to their practice squad last September, then promoted him to the 53-man roster Nov. 8. He appeared in eight games and was second on the team with 17 special teams tackles.

But getting the chance to start last week felt like playing his first game all over again.

“It felt great to be out there on an every-down type of situation,’’ Arrington said.

With the Patriots’ inexperienced group of corners, a starting position seems to be up for grabs to someone who can make plays. In the Week 2 loss to the Jets, Butler struggled to contain receiver Braylon Edwards. That meant a chance for Arrington, who was credited with two tackles in the 38-30 victory against Buffalo. In that game, Arrington also broke up a pass intended for Lee Evans in the end zone.

“I thought Kyle did some good things,’’ Belichick said. “Not perfect; there are some things he needs to work on, but I thought he competed well. That was a nice play he made there on the fade ball in the end zone. He made some tackles. He works hard. He plays hard. He gave us a good effort [and] competed well.’’

This isn’t the week for the Patriots to have uncertainty in the secondary. Brandon Marshall leads the Dolphins with 22 catches for 290 yards and one touchdown. And Davone Bess (13 catches) and Brian Hartline (8) give quarterback Chad Henne two more dependable options.

But getting to play a significant number of snaps in a regular-season game is the kind of opportunity that can give a player confidence.

“It did, a lot, especially going against a team like Buffalo with pretty good receivers like [Roscoe] Parrish and Lee Evans. It’s definitely a confidence builder,’’ Arrington said.

Arrington, a native of Accokeek, Md., which is about 10 miles north of Washington D.C., ended his college career at Hofstra in 2007. The Eagles signed Arrington as a rookie free agent in April 2008. By September of that year, Arrington had been waived, signed again, and waived again by the Eagles.

A week after the Eagles released Arrington from their practice squad, Tampa Bay added him to its practice squad. Again, Arrington went on a transaction roller coaster with the Bucs, a making a stop on the 53-man roster before being waived again.

That’s when the Patriots signed him.

“When you come out of a [Division] 1-AA school that doesn’t even have a [football] program anymore, as a free agent guy, all you need is an opportunity, and that’s what the preseason is for,’’ Arrington said. “If you don’t make that club, then you’re auditioning for 31 other teams, and that was my case in Philly. And then Tampa gave me a shot and things didn’t work out there either, and the Patriots gave me a chance and I finally got on the field during regular-season action and I finally got to show what I can do, and I’m just thankful.’’

In 2009, Arrington focused on special teams to secure his spot. Against Jacksonville on Dec. 27, he had five special teams tackles, the most by a Patriot since Larry Izzo had six in a game in 2002.

When Arrington arrived for training camp this season, he felt he was making progress toward making the team. A groin injury slowed him at the end of the preseason, but he did enough to earn a job.

As Arrington works at maintaining his position, he keeps the words of his father in mind.

“They’re definitely happy for me,’’ Arrington said. “Like my father always told me, just keep chipping away at it because hard work pays off, and it’s true.’’