Overall, they had it covered

Young defense played like a bunch of old pros 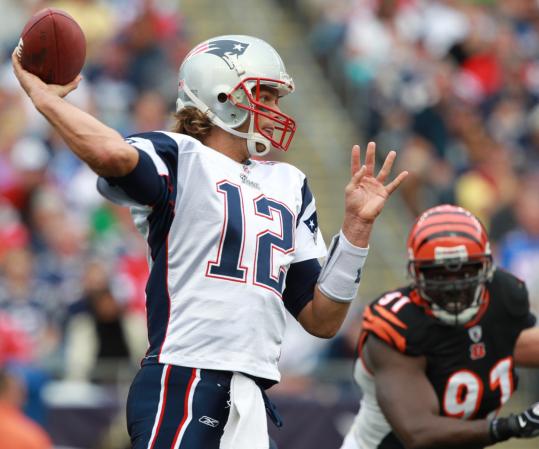 Quarterback Carson Palmer threw deep to Terrell Owens along the left sideline, but McCourty defended perfectly, knocking the ball out of Owens’s hands. It wasn’t the only time the Bengals picked on New England’s young corners, and McCourty welcomed the attention.

“Just to be able to make that play gave me a little bit of momentum and kept the defense going,’’ McCourty said. “Any time you can stop the offense going deep, it’s a good play.’’

With all of the questions surrounding the Patriots’ defense entering the season, the unit left Gillette Stadium feeling pretty good after the 38-24 win. The Bengals were held to 3 points in the first half. Palmer completed 12 of 19 passes for 130 yards and one interception in the first half, while the Bengals rushed for 30 yards on 13 carries.

“We knew their defense was young, but they surprised us,’’ Bengals running back Bernard Scott said. “We knew they were going to be physical, but I didn’t expect them to make the plays they made. We made some mistakes, but they were making plays. They are professionals; that’s what they get paid to do. I take my hat off to them, they are a hell of a team.’’

After a sluggish first half, the Bengals improved over the final 30 minutes. Palmer completed 34 of 50 passes for 345 yards and two touchdowns overall. Chad Ochocinco had 12 catches for 159 yards and one touchdown, and Owens had seven catches for 53 yards. While McCourty mostly covered Owens, Darius Butler, who is in his second season, was primarily responsible for Ochocinco.

“No question those guys competed their tails off all game,’’ nose tackle Vince Wilfork said. “Even when we gave up plays. Everything won’t be perfect. It can’t be perfect. It’s impossible to be perfect, so I’m very happy with the way our team played, especially the defensive unit.

The defense had lots of highlights. On the opening drive, Tully Banta-Cain and Myron Pryor followed behind Wilfork to sack Palmer for a 4-yard loss on third and 2. Safety Patrick Chung was another standout, recording a career-high 16 tackles. Chung had 26 tackles his entire rookie season in ’09. In the second quarter, linebacker Gary Guyton intercepted a Palmer pass and raced 59 yards, returning a pick for a score for the first time in his career.

Linebacker Rob Ninkovich forced and recovered a fumble in the first quarter, stripping running back Cedric Benson, giving the Patriots possession at the Bengals’ 28-yard line.

Despite New England’s performance, Owens wasn’t ready to hand out any compliments.

“It was more of case of what we didn’t do than what they did,’’ said Owens. “We had some opportunities we didn’t take advantage of.’’

There was news on the Mankins front. Mankins and the Patriots were a step closer to resolving their rift about two weeks ago when the Pro Bowl guard was asked to make a public apology for his controversial June comments, ESPN’s Adam Schefter reported.

According to Schefter, who credited multiple sources familiar with the situation, Mankins and agent Frank Bauer arrived in Foxborough intent on reaching a long-term agreement. Before a deal was cemented, the team asked Mankins to apologize to owner Robert Kraft for telling ESPNBoston.com he was frustrated the Patriots did not keep their word in working out a contract after the 2009 season.

The sources said Mankins called Kraft and apologized. The team then asked Mankins about 90 minutes later to make a public apology. Mankins refused and talks dissolved.

Patriots president Jonathan Kraft was asked about the Schefter report on WBZ-FM (98.5) before the game and was limited in his comments. He said Mankins did make a private call to Robert Kraft to apologize. Jonathan Kraft refused to comment more on the situation, but he did say the Patriots put “real offers on the table, but those offers weren’t deemed acceptable by the other side.’’

Many happy returns
The Patriots wanted to see more yards out of their kickoff and punt return units this season, and with a healthy Brandon Tate in the lineup, that looks realistic. Tate returned the opening kick of the second half 97 yards for his first career touchdown. The second-year receiver missed most of his rookie campaign with knee woes.

The return for a touchdown was the first for New England since Ellis Hobbs scampered 95 yards on a kickoff in 2008 against Oakland. Tate also returned a kick for a touchdown in the preseason.

“He’s a good runner, good with the ball in his hands, and it looked like he was close on at least one other one,’’ Patriots coach Bill Belichick said. “Again, it’s good to get those points in the kicking game. We’ve been working hard on that. We’ve had some production here so far this year. Of course, [yesterday] was a big one, so hopefully we can keep that going.’’

Welcome additions
The biggest addition to the offense may be the tight ends. The three have added another dimension that makes Brady happy.

Rob Gronkowski caught his first touchdown, hauling in Brady’s 1-yard pass in the fourth quarter that gave the Patriots a 38-17 lead. It was Gronkowski’s only catch. Fellow rookie Aaron Hernandez had one catch for 45 yards on the opening drive, which ended with Brady dumping a pass to Wes Welker for a 9-yard touchdown. Meanwhile, veteran Alge Crumpler provided crucial blocking.

“Not only can they block, but they’re all able to catch the ball, too,’’ Brady said. “It creates different mismatches out there.’’

They’re out
Julian Edelman (sprained foot), running back Laurence Maroney (thigh), Kaczur, and cornerback Terrence Wheatley (foot) all were scratches. Healthy inactives included linebacker Dane Fletcher, receiver Taylor Price, offensive lineman Steve Maneri, and defensive lineman Brandon Deaderick . . . Bengals kicker Mike Nugent’s 54-yard field goal in the second quarter was the longest ever in Gillette Stadium. Patriots kicker Stephen Gostkowski attempted a 56-yarder in the last seconds of the first half but it drifted wide right . . . The Patriots punted just once . . . Six of the Patriots’ 2010 draft picks made their debuts. Among them was outside linebacker Jermaine Cunningham, who missed the preseason with an ankle injury . . . The 38 points were the second-highest opening day total in Patriots history.

Monique Walker can be reached at mwalker@globe.com; Joe Sullivan of the Globe Staff contributed to this report.