Catching up done by Moss

Back at practice following illness 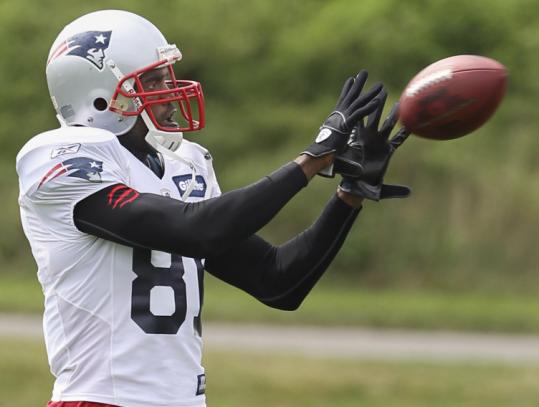 In his return to practice after illness kept him out Wednesday, Patriots receiver Randy Moss hauls in a pass yesterday. (Stephan Savoia/Associated Press)
By Michael Whitmer Globe Staff / September 10, 2010

FOXBOROUGH — Most of the attention focused on the person throwing the passes, but Randy Moss was back on the field yesterday catching them, a day after missing his first practice of the preseason because of what the Patriots said was illness.

Moss took part in the morning walkthrough, then was spotted in the locker room before the afternoon practice, but declined an interview request. In the portion of practice that was open to the media, Moss was participating fully in preparation for Sunday’s season opener against Cincinnati, as was Tom Brady, hours after being involved in a car accident in the Back Bay.

Moss wasn’t the only one back on the field. Julian Edelman, who missed the last two preseason games with a foot sprain, was practicing, as was Laurence Maroney (thigh). According to the team’s practice report, Edelman and Maroney had limited participation.

Three players missed practice: Cornerback Terrence Wheatley still has a protective boot on his foot, while tackle Nick Kaczur has a back injury and guard Quinn Ojinnaka is serving a one-game suspension handed down by the NFL for violating the league’s personal conduct policy.

Friendly competition
The Patriots and Bengals both feature rookie tight ends who were high draft picks, with Cincinnati taking Jermaine Gresham in the first round (21st overall) and the Patriots selecting Rob Gronkowski in the second (42d). Might there be a little rivalry between the two?

“No, not really, we’re cool with each other,’’ Gronkowski said. “I met him at the combine, so of course he’s competition, but at the same time, when we were there, we were all friends and we’re supporting each other.’’

Most of the scouting services had Gresham as the top-ranked tight end, though he missed his final season at Oklahoma with a knee injury. He’s one of many new targets quarterback Carson Palmer can throw to, along with Terrell Owens and Jordan Shipley. Gresham caught 12 passes in the Bengals’ five preseason games (Cincinnati played in the Hall of Fame Game, too).

“He’s a big, big receiver, that’s what he basically is,’’ said Patriots linebacker Jerod Mayo. “They like to get him matched up on safeties and linebackers and let him use his size to make plays. He’s been getting better each and every week.’’

Gresham is someone the Patriots must prepare for, but the same thing might apply to Gronkowski vis-a-vis the Bengals. The 6-foot-6-inch Arizona product caught a team-high eight passes in the preseason, half going for touchdowns. He’ll give the Patriots a potent red zone threat, and is eager to start his NFL career.

“I’m definitely getting the butterflies when I think about it,’’ Gronkowski said. “It’s like your first game in college, but this is a high stage.’’

Cleaning up
One area that concerns Bengals coach Marvin Lewis is penalties; Cincinnati committed 114 last year (only five teams had more), while the Patriots were penalized just 81 times. That trend carried over into the preseason. In five games, the Bengals committed 52 penalties for a whopping 490 yards; the Patriots were whistled 22 times in four games.

“We’ve had some careless hands thus far this preseason and there’s some things we need to get cleaned up,’’ Lewis said. “That’s one of the things we’re always working at. That’s important to me. Part of being a successful football team is being disciplined.

“When [the Patriots] win football games, they play pretty low-penalty.’’

Not at full strength
Two Bengals — receiver Andre Caldwell (groin) and cornerback Brandon Ghee (head) — missed practice yesterday, while running back Brian Leonard (foot) had limited participation . . . The six straight opening-game victories by the Patriots represent the second-best active streak. Pittsburgh has won seven consecutive openers. The Bengals have lost two straight opening games . . . The first Patriots-Bengals game took place at Fenway Park, with the Patriots winning, 33-14, in 1968 . . . New England leads the series, 13-8, and has won the last three meetings. The last Bengals win came in the 2001 opener in Cincinnati (23-17), a season in which the Patriots went on to win the Super Bowl.