Brady deal is closer, but not done yet 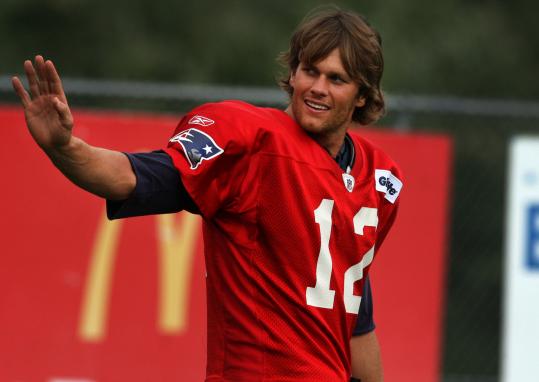 All indications are that Tom Brady — the most important player in Patriots history — will not be waving goodbye to New England any time soon. (Stan Grossfeld/Globe Staff)
By Albert R. Breer Globe Staff / September 8, 2010

Tom Brady’s new contract — if it gets done, and nothing is set in stone — will do more than just lock up the most important player in franchise history.

It will send a powerful message that winning remains the priority for the Patriots in a business that becomes more about the bottom line as a potential March lockout looms.

Now all that’s left is to close the deal, something that’s more complicated than handing Brady a pen.

But should an agreement get hammered out by Sunday’s season opener against Cincinnati — which is a much fairer bet than it was a month ago — it will say plenty about both sides’ motivation.

The important thing to remember is that neither side had to budge. Yet both have done significant moving and shaking toward an agreement since early August.

It might have behooved the Krafts, from a financial perspective, to wait and slap Brady with the franchise tag next February, then worry about a deal after a new collective bargaining agreement was worked out. Similarly, it would have helped Brady, who carried much less leverage into his contract talks than Peyton Manning carries into his, to wait for the Colt quarterback’s deal to get done and then use the massive numbers on that one as a negotiating point.

A law degree may be required to fully understand this situation, and that’s why it has been important for the Patriots to simplify it.

Brady plays the game’s most important position, one that gets more important with every rule put in to assist the passing game. He can best cement his legacy by staying with the club he won three Super Bowls with. And the Krafts want him around.

Back in July, a league source stepped back, took inventory, and provided perspective on just how complicated the deal was to do in this environment.

“I’m a firm believer that if a team wants to do a deal, they’ll find a way to get it done,’’ said the source.

At the time, that hardly seemed to be the approach taken. There was good reason, too.

Manning’s leverage sits on the back end of his current contract, where his $19.2 million cap figure supersedes his franchise tag number, and pushes his 2011 tag figure to 120 percent of his 2010 number, or $23.04 million. That means if the Colts were to franchise him two years in a row, he’d be due more than $50 million.

Brady, on the other hand, has a low 2010 cap number, which means he’d be subject to the average of the top five quarterback figures from this year if he were tagged in March. That number was projected to be $13.8 million, then rose to $14.5 million when Brett Favre returned with the Vikings, still well short of even last season’s tag figure of $16.41 million. That means Brady could be held by the team under the tag for two years at just under $32 million.

To cut through the junk: Both the Colts and Patriots hold trump cards, as all teams do, with prospective free agents. That’s the franchise tag.

But the difference between one player with an expiring contract and the next can be stark, based on the numbers at the end of the contract.

Manning’s potential 2011-12 “hostage situation’’ would bring him $25 million per year, while Brady’s would get him $16 million per.

That the Patriots didn’t threaten Brady on that speaks well of them, as does the approach taken here, with people higher up in the organization becoming more involved than usual.

It seems Brady will get his money, with a four-year extension possibly mirroring the four-year add-ons done to his rookie deal in 2002 and his second contract in 2004. ESPN reported that the numbers are in the $72 million-$80 million ballpark for those four years.

That would trump Eli Manning’s six-year, $97.5 million extension signed with the Giants in 2009, which included $9.4 million left over from his rookie pact, and was worth $16.25 million per in new money and $15.27 million a year in total dollars.

Could Brady get more by waiting? Undoubtedly. Peyton Manning’s camp hoped to get a deal before Brady despite the slow-moving nature of the talks with the Colts.

The feeling was that Brady wouldn’t quite get the market-altering deal the elder Manning should command, and that could undermine his case. The target for Peyton is in the ballpark of $25 million a year.

Brady won’t touch that. But what he will get is financial security at 33 heading into a labor situation that could create even more fiscal uncertainty for the players than the owners.

There are still details to figure here. How much would Brady get prior to a lockout? How much money will be stuffed in 2011 when games could come off the schedule? How much is guaranteed?

All of those will be valid questions if the deal gets completed. But what’s no longer in question is the level of motivation on both sides to put this one to bed.