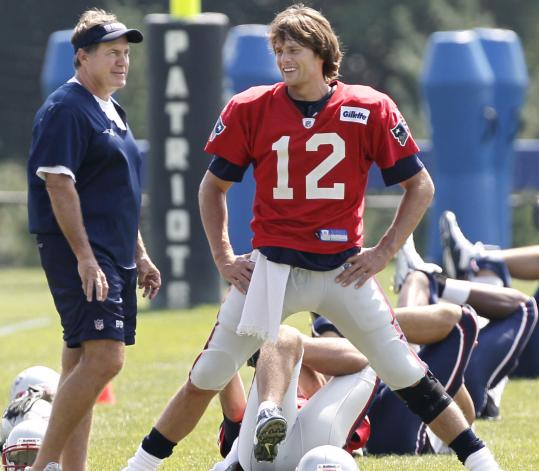 The faces of the Patriots franchise, Bill Belichick and Tom Brady, go through the motions during the final preseason practice. (Winslow Townson/For The Boston Globe)
By Shalise Manza Young Globe Staff / September 1, 2010

FOXBOROUGH — The NFL is looking into a sexually-explicit video of Patriots rookie linebacker Brandon Spikes, which is making the rounds on the Internet. Spikes could face disciplinary action under the league’s rules of personal conduct policy.

A source with knowledge of the situation confirmed that it is Spikes, the 62d overall pick in the draft, in the video. There are no allegations that the woman in the video did not consent to the activity.

“Brandon is showing himself to be a high-character guy in the Boston community and has the promise of being a very good player,’’ he said.

Spikes has been drawing rave reviews for his instincts and play since arriving in New England. He could start at inside linebacker alongside Jerod Mayo.

While at Florida, Spikes was involved in an eye-gouging incident against Southeastern Conference rival Georgia. The North Carolina native apologized and was suspended for the first half of the Gators’ next game.

Cut down to size
Yesterday was cutdown day, with teams required to trim rosters from 80 players to 75. They must be pared to 53 on Saturday.

To get there, New England placed four players on injured reserve and waived another.

Cornerback Terrence Johnson was released for the second time in as many weeks. The undrafted rookie from Division 2 California (Pa.), faced long odds to make the roster, particularly after missing a large chuck of training camp because of an undisclosed injury.

The move on Lockett was expected; the special teamer has already undergone surgery for a torn pectoral muscle. Richard likely was injured in last Thursday’s game against St. Louis, as he had taken part in every practice to that point.

Mane connection
Quarterback Zac Robinson’s terrible rookie hairdo has been buzzed away, but he had Tom Brady to thank for the unique style he had under his helmet for last week’s game.

“He just started hacking away,’’ Robinson said. “I had no mirror in front of me, I had no idea what he did until I stood up and saw it. It was a good surprise, I guess.’’

Brady drew a jagged line from ear to ear over the top of Robinson’s scalp and took off all the hair from there forward.

As for Robinson’s play, it doesn’t seem he’s made much of an impression. Bill Belichick was asked about Robinson’s first training camp compared with Brian Hoyer’s last year, and the coach lauded Hoyer, saying he and former Patriot Matt Cassel “set the bars at a pretty good level,’’ while hardly mentioning Robinson.

The nose tackle is active in the team’s various charity events, including a draft-day event through his own foundation to raise funds for diabetes research. His father, David, died from complications of the disease in 2002. His mother, Barbara, died just a few months later.

Wilfork was very emotional during his acceptance speech, mentioning his parents, and his teammates, without whom, he said, his draft-day event wouldn’t be possible.

“[My teammates] are my second family,’’ said Wilfork. “My kids, my wife, the New England Patriots — that’s all I have.’’

That’s a wrap
Yesterday was the final practice of the preseason for the Patriots. Belichick was asked how many practices had been held since training camp began July 29, and he pulled his practice notes out of his pocket before confirming 37 . . . Nose tackle Myron Pryor returned for the full-pads session after not participating in Monday’s practice, but numerous players did not practice, including: Julian Edelman, Terrence Wheatley, Kyle Arrington, Brandon McGowan, Brandon Deaderick, Aaron Hernandez, Jermaine Cunningham, and Ron Brace.

Shalise Manza Young can be reached at syoung@globe.com.