No sure unit of measure yet for Patriots’ offense 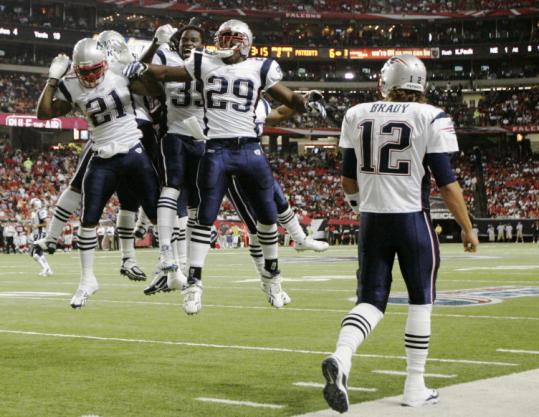 No matter how his offense does it, Tom Brady hopes for a lot of wild TD celebrations this season like this one Thursday night. (John Amis/Associated Press)
By Albert R. Breer August 23, 2010

We may have learned a few specifics about the Patriots’ offense Thursday night.

Coaches always say that their team’s look on offense — or defense — is based the opponent they are facing that week.

“I would imagine that during the season we will probably do what we usually do offensively, which is to game plan our opponent and try to figure out what we feel like is the best way to attack them,’’ coach Bill Belichick said. “I don’t think we have an identity right now and I don’t know that we [will] have any particular one. It would depend on who we are playing and what they do and what we feel like the best matchups are.

“Hopefully right now we have a basic installation of things that would give us the flexibility to . . . gain advantages on matchups. That’s the idea, anyway.’’

That’s fine, but the truth is that an offense’s foundation can’t be set based on another team’s personnel. It must be set with an eye to its own players, and their strengths and weaknesses. And how the Patriots’ talent will come together is one of the remaining pieces of the puzzle the team has to put in place by the end of the preseason.

The Patriots’ offenses in 2004 and 2007, the last two times the team reached the Super Bowl, each were versatile, but they had major differences. The ’04 offense was built around a powerful running game, with the straight-ahead style of Corey Dillon providing the punch, and play-action passing was an offshoot of that. In ’07, the Patriots ran a shotgun-heavy, pass-first spread offense that overwhelmed opponents on the perimeter.

Each unit could adjust its game as needed, but each had its way of imposing its will on opponents.

The first two preseason games, against New Orleans and Atlanta, provide evidence that the Patriots have options on offense, more than they had last season.

Both rookie tight ends have excelled in spots, with Aaron Hernandez flashing his open-field and red-zone ability, and Rob Gronkowski showing an understanding of how to use his massive frame in the passing game.

Graybeard tailback Fred Taylor’s burst seemed to be back Thursday night, after he missed most of 2009 because of ankle surgery. The running game has been more productive in short-yardage situations and has created more explosive plays than in much of 2009.

Receiver Julian Edelman showed an ability to wiggle free from coverage while running patterns and in the return game on numerous occasions against the Saints, and Brandon Tate’s explosiveness was clear on a 15-yard catch-and-run through the teeth of the Falcons defense to convert a third-and-15.

Even better, of the players cited above, only Taylor isn’t among the group of first- and second-year players that is so vital to this year’s chances.

But really, all any of this indicates right now is potential. Playing well in the preseason against vanilla defenses — and in Atlanta’s case, one without several nicked-up front-line players — and doing it against teams game-planning against you are different things.

The potential of the youth added to the offense is clear, but the inconsistency of young players is as well. The running game registered minus yardage on seven plays Thursday night, and there were breakdowns in Brady’s protection for the second straight week. Those were the things Belichick focused on after the game.

“We had our moments and then we had other plays that weren’t so good,’’ he said. “I think in probably all areas of the game, not just the running game, but all areas, we’re still working on more consistency, eliminating the bad plays and having more good ones.

“That’s offense, defense, special teams, running, passing, kicking, returning. I think you could say that for every phase of our game, [including] coaching. You could put it all in there.’’

So we know there’s potential on offense, and there also could be growing pains.

One also gets the idea that the offense could be different than the one the Patriots have been running since the acquisitions of Wes Welker and Randy Moss in 2007. In that time, New England has broken records for amount of time spent in the shotgun, and it has smashed marks for productivity.

The page could be turning, though.

When Brady was in the game, the offense featured a perfect run-pass balance against New Orleans (8 runs, 8 passes) and Atlanta (13 and 13). And Brady has been under center, instead of in the shotgun, for 31 of his 42 preseason snaps.

It might be dangerous to read too much into that.

But the Patriots have in the last few weeks found out more about what they have on offense.

The next task is figuring out just what that unit’s identity will be.