THIS STORY HAS BEEN FORMATTED FOR EASY PRINTING
Patriots 27, Saints 24 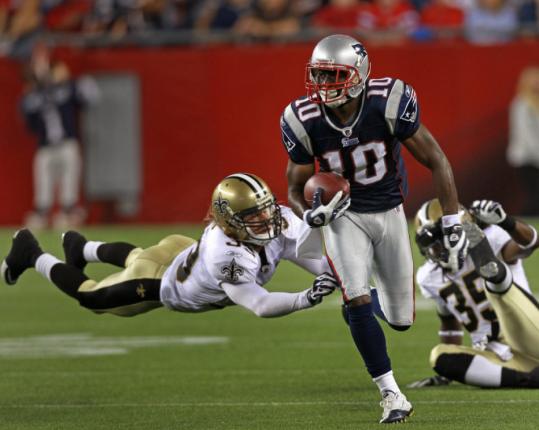 Patriots receiver Darnell Jenkins leaves a pair of defenders in his wake as he takes off on a 52-yard catch-and-run to set up the winning field goal. (Barry Chin/Globe Staff)
By Shalise Manza Young Globe Staff / August 13, 2010

FOXBOROUGH — Football, albeit the exhibition variety, was back last night, as the Patriots and Saints wrapped up their three training camp days together with a preseason tilt.

The Patriots came away with a 27-24 victory, the winning points coming with less than a minute to play on a 28-yard Stephen Gostkowski field goal, set up by a 52-yard catch-and-run from receiver Darnell Jenkins.

Undrafted rookie Sergio Brown ended any chance of a New Orleans comeback when he drilled receiver Montez Billings in the back as he went up for a high pass. Billings couldn’t hang onto the ball and Eric Alexander fell on it.

“We learned a lot about ourselves just in the two days we had a chance to work with New Orleans and their fine ball club,’’ tight end Alge Crumpler said. “We’re just trying to establish an identity for this team and not worry about anything else.’’

Wes Welker did not play. Though the shifty receiver is recovered from his torn left ACL and rotator cuff injuries and was on the field for 11-on-11 work during practices this week, clearly the coaching and medical staffs are waiting before putting Welker in a game.

The plan is to get him some preseason work, but last night was not the time.

One of the high points for New England was its effectiveness in the red zone, a problem area last season. There has been near-daily work on plays inside the 20-yard line since camp began, and it may be paying off: Last night the Patriots were 3 for 5 in red zone trips, a perfect 3 for 3 in goal-line chances.

They did miss an opportunity right out of the gate, however. The defense forced Drew Brees and the Saints into a three-and-out situation after a third-down sack by Marques Murrell, and Julian Edelman returned Thomas Morstead’s punt 40 yards.

But incomplete passes on second and third downs meant Gostkowski was on for a 35-yard field goal try, which he made.

“I would have liked to do a little more with that opening drive,’’ coach Bill Belichick said. “We had good field position and a good opportunity there, but in the end we were able to get it in [the end zone] at times. That was good, but hopefully we can build on that.’’

Brady played just the first two series, the second of which was a vintage 14-play, 93-yard touchdown drive.

Brady completed three passes of 20 or more yards on the way to the end zone, first a 23-yard sideline pass to Randy Moss, followed three plays later by a 20-yarder to Brandon Tate, who did well to get both feet down for the catch. On second and 10 a couple of snaps later, Edelman took a bubble screen for a 20-yard gain, slipping past Jabari Greer near the line of scrimmage.

That marked the end of the quarterback’s night; he went 5 for 8 for 67 yards.

With the defending Super Bowl champions unable to generate a first down on their first two possessions, Brees was on the field into the second quarter.

“We would have liked to start off a little crisper than we did. To have two three-and-outs to start, it’s a little thing here and there,’’ Brees said. “To focus on the positive, we [got] into that third drive and converted a couple of third downs with a great mix of run and pass and ended up getting a touchdown out of it.’’

That third New Orleans drive went for 86 yards over 20 plays.

It may not have ended with a Reggie Bush touchdown had Patriots cornerback Darius Butler not been flagged for an egregious illegal contact call on fourth and long. The penalty gave New Orleans a fresh set of downs, though it also had to convert on two long third downs on its way to the end zone.

The Patriots went into halftime with a 17-7 lead after scoring during Brian Hoyer’s first possession under center.

When Hoyer handed the ball off in that drive, just as Brady had done, he did so to BenJarvus Green-Ellis. The third-year running back was something of a surprise starter, getting the call over Laurence Maroney, Sammy Morris, and Fred Taylor.

“Whatever coach calls upon us to do, anyone of us, we know we have to go out there and execute,’’ Green-Ellis said. “You never know what’s going on, you just have to be ready at all times.’’

Edelman was certainly ready. He collected 133 all-purpose yards on six receptions and two punt returns — a Welker-like performance, but don’t ask him if he should be compared to the All-Pro.

“It’s unfair to him,’’ Edelman said. “He’s the best slot in the game. I learn everything [from him]. I learn how to prepare, I learn how to run routes. It was a blessing to come here and sit behind a guy like that and watch him practice and run routes and how he prepares.’’

Hoyer led the Patriots on two touchdown drives, both ended with Maroney scores; neither he nor Brady spoke with reporters after the game. Hoyer was 8 for 13 for 106 yards before ceding to rookie Zac Robinson, who had a rough outing (3 for 8, 48 yards, sack).