Brady, Patriots have yet to agree on new contract 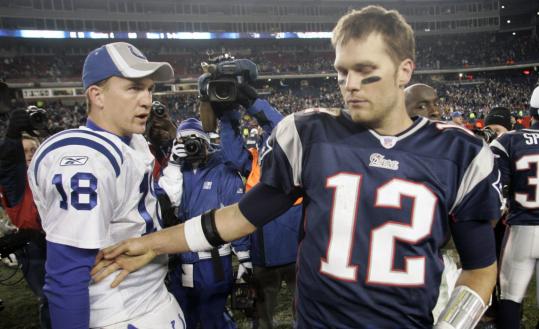 Peyton Manning (left) and Tom Brady are often connected on the field, and now are linked off it. (File/Winslow Townson/Associated Press)
By Albert R. Breer Globe Staff / July 25, 2010

Tom Brady will report to his 11th training camp as a New England Patriot this week in pursuit of many of the same goals he’s had in the 10 years previous.

To improve as a player. To make his teammates better. To become, once again, a champion.

But for the first time in a long time, on-field goals won’t be the only things he’s focused on as he sweats through the summer humidity with his teammates.

The Patriots’ franchise quarterback wants a new contract. Period. And he doesn’t have one, which is a problem.

These are uncharted waters in what has otherwise been as strong a relationship as a quarterback and his team can have. Brady is a year closer to being eligible for unrestricted free agency than he’s ever been, and the labor situation is hovering like a black cloud over negotiations.

At the very least, Brady seems to be frustrated by how this has played out.

That’s not expected to keep him from showing up at camp this week with his teammates. Or playing out the season. Or doing everything he can to help the team.

But it does cast doubt over the quarterback’s future.

To be clear, both sides have shown a desire to do a deal. There have been, to quote one person close to the negotiations, a “fair amount’’ of talks over the last year. There is a belief that absent the league’s labor battle with the players’ union, a contract would be done already and this wouldn’t be an issue at all.

That, though, is just it.

The big-time quarterback negotiations of 2010 have become, in many ways, a microcosm of the larger issues the NFL and its players have with one another.

On one side, a broken system is cited and an uncertain future is the concern.

On the other, is the insistence that a deal can be done.

A Colt comparison
As has been the case for the last decade on the field, Brady’s and Colts quarterback Peyton Manning’s situations have been intertwined off it this offseason. Each player will enter the 2010 season in his mid-30s with an expiring contract.

But there are, indeed, some key differences.

Manning has been here before. He played out his rookie deal, and was franchised in 2004. He was coming off a record rookie deal worth $47.6 million over six years (the previous high had been six years and $19 million for Orlando Pace), and had a high cap number on the back end that raised his franchise figure and necessitated a long-term extension from the team’s standpoint.

Manning then got a seven-year, $99.2 million contract that may have been slightly less than what he could have held the Colts up for.

Brady came into the league as a sixth-round pick, and signed a five-year deal worth close to $30 million two years later, with a year left on his rookie deal and two remaining before he’d become eligible for unrestricted free agency. With two seasons left on that contract, he signed a six-year, $60 million contract, 44 percent of which was fully guaranteed.

Brady received a $3 million roster bonus earlier this year, and has just $3.5 million left on the six-year pact. Manning is due $15.8 million in base salary, and the cash isn’t where the benefits of that end.

The franchise number for quarterbacks (the average of the top five cap figures at the position or 120 percent of the player’s previous year figure, whichever is greater) is $16.41 million, up from $14.65 million in 2009. As it stands now (new quarterback deals would change this), the franchise number for 2011 is actually set to fall to $13.8 million. And according to NFL sources, it’s a certainty that both Brady and Manning will receive the franchise tag if neither can come to agreement on a new deal by February.

In essence, that hypothetical $50 million-plus gives Manning leverage in his negotiations that Brady lacks. Which isn’t any more likely to make Brady a happy camper.

If all this pushes the Colts to do a deal with Manning, then the market will be set for Brady. But because of the conditions, Manning has less to worry about and the Colts are singing the same tune about labor uncertainty that New England is.

“We all understand it, it’s been explained to the team, [Manning] understands, we live in a parallel universe,’’ Colts president Bill Polian said. “I think it’s the number of dollars that are at issue, and how those numbers fit into the labor situation or the system going forward. That’s the great unknown.’’

It raises a valid question.

One estimate shows that a franchise quarterback should, over the life of his contract, take up somewhere between 10 and 13 percent of a club’s salary cap. That number will likely be on the high end early in the deal and, if the cap goes up, on the low end later on.

That this is an issue reflects the owners’ desire for big changes to come.

If future salary caps were to fall or rise by a small amount, this wouldn’t be an issue. So the reluctance to commit to what is market value now only displays the belief that that value will be significantly different when the labor situation is settled.

The most important aspect of Manning’s 2004 contract was a $34.5 million signing bonus. The cap that year was set at $80.58 million, so the quarterback’s bonus was worth 42.8 percent of that number.

In fact, it might take less than that in guaranteed money (of which the signing bonus is just a part) to get a deal for Manning or Brady done.

It’s quite obvious that the clubs see change coming, and the potential for franchise-quarterback deals to act as nooses around their own flexibility. Manning, because of his franchise numbers, has the ability to maintain leverage through that kind of upheaval. Brady doesn’t.

Big bonus era?
There’s a strong belief among agents and union people that it’s fairly simple what could get a Brady or Manning deal done: a hefty signing bonus.

The big veteran deals this offseason signed by 49ers linebacker Patrick Willis, Jets left tackle D’Brickashaw Ferguson, and Broncos linebacker Elvis Dumervil all represented financial breakthroughs for the players. But they also lacked the kind of large upfront money that deals for Pro Bowlers normally include. Many of the guarantees came later in the deals, reflective of the owners protecting themselves in the event that a work stoppage comes after this season.

Indications are the Patriots and Colts would be willing to do such deals for their quarterbacks. But as good as Willis, Ferguson, and Dumervil might be, they don’t have the leverage these franchise quarterbacks have.

And the rules actually hurt the franchise quarterbacks far less than those three players.

The “30 percent rule’’ — limiting annual raises in base salaries off existing deals to 30 percent — is less of a concern, because Manning and Brady have bigger numbers on the back end of their deals. The “Deion Sanders Rule,’’ which kept a team from loading more than half a player’s deal into his signing bonus, went away with the salary cap, and that opens the door for more upfront money in new contracts. The “Reallocation Rule’’ plays in, since it limits how much money can be guaranteed in future years, as further motivation for the player to demand a big signing bonus.

Cash flow problems, too, can be mitigated, since deferred payment schedules, according to union sources, are common with large signing bonuses and easily executed.

That leaves one reason not to hand over the cash: Future conditions could be different than current conditions. And if you’re counting on that, then you might be careful about committing an exorbitant bonus that you can’t take back.

The endgame
The refrains on each side, through all the complications, are easy to understand.

The team will cite uncertainty ahead. The player will say that, if properly motivated, a deal is more than doable.

“I’m a firm believer,’’ said one source with knowledge of the quarterbacks’ situation, “that if a team wants to do a deal, they’ll find a way to get it done.’’

Back in the early 1990s, when the salary cap was first being put in place, a one-year transition period was afforded to teams. Clubs took advantage with a flurry of buzzer-beating signings in December 1993 to get dollars through before the cap took effect.

That, of course, was an uncertain time. But the window allowed for star-heavy teams like the Cowboys and 49ers to prepare for a new day in NFL finances.

Perhaps teams will be afforded that chance in 2011.

It seems unlikely now that flagship, ratings-drawing teams like New England and Indianapolis or, for that matter, the Cowboys, Redskins, and Giants, will be held over a barrel by the new rules.

They’ll have a say, of course, but the chance remains that they’ll have to pay then for fiscal irresponsibility now.

It’s possible the league retroactively puts a cap on 2010, and penalizes teams. It’s nearly certain that bonus money, or efforts to get around retroactive accounting, will be analyzed if and when the cap comes back.

All of that is to be taken into consideration, of course.

The Kraft family knows this as well as anyone, being among the most prominent and powerful ownership groups in the league.

Brady knows the score, too, now one of 90 player reps in the NFL, and one of just five quarterbacks on that list.

And in many ways, this negotiation is being waged similar to the labor battle on the league level.

The owners’ side wants change, and is preparing within their businesses for that change.

The players’ side is living in the here and now, trying to maintain the financial prosperity that has seen the cap rise 34 percent from the first year of the current CBA ($94.5 million in 2006) to the final year of the cap ($127 million last year), and pushing to operate within that system.

That’s why finding a resolution seems to be about as easy as the labor discussion has been.

Which is to say, not very.