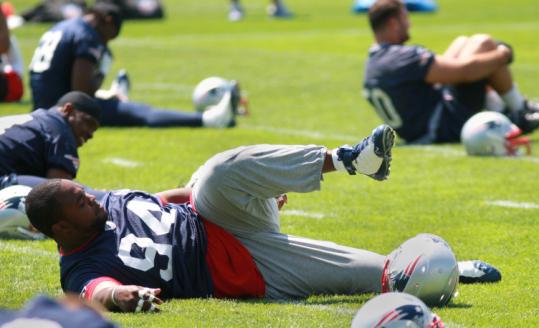 Don’t accuse the Patriots’ Ty Warren of lying down on the job; he expects to have his diploma from Texas A&M next spring. (Jonathan Wiggs/Globe Staff)
By Shalise Manza Young Globe Staff / June 16, 2010

FOXBOROUGH — Ty Warren’s days of playing football for Texas A&M may long be over, but the Patriots defensive lineman was once again a big man on campus in College Station this spring.

The 29-year old veteran returned to school, completing 21 credit hours toward his bachelor’s degree with a double major in agribusiness and agricultural leadership and development, choosing his education over taking part in the Patriots voluntary offseason workout program.

That a man who has enjoyed tremendous success on the football field would grab a backpack and head back to class is admirable enough. That Warren also forfeited a $250,000 workout bonus to do so . . . well, some might find that a bit more crazy than admirable.

The Bryan, Texas, native had always planned on completing his degree, but two things pushed him to get it done sooner rather than later: the desire to show his children that he earned it and the threat of an NFL lockout in 2011.

And there are now four Warren children to show off his soon-to-be-earned diploma to: Ty and wife Kesha welcomed Brooklyn, their fourth daughter, April 26. She joins big sisters Brionna, Brielle, and Bailey.

The girls helped break up their father’s days at school, in a fun reversal of roles.

“They got to see it firsthand,’’ said Warren. “They always heard about their daddy going to Texas A&M, but they actually got to pick me up for lunch and do all that type of stuff on campus, so it was good.’’

He began taking classes last year, but recovering from double groin surgery and rehabbing to get ready for the 2009 season derailed his plans. With the threat of a lockout looming, he refocused this year.

“I’ve had opportunities to go back to A&M and [work for the school] and my thing is this: I don’t want to work just because I’m a Super Bowl champion New England Patriot, former A&M Aggie.

“I want to have credentials when I go in there. I want to earn what I’ve got.’’

It was not a difficult decision. Kesha fully supported him, and his teammates did as well, some of whom have found inspiration in his choice. Warren has had talks with several players considering finishing up their own degrees, as they discuss the uncertain labor situation in the league and the brevity of their careers.

“You’ve always got to consider that,’’ he said. “You practice, work out, and each game that you play, it’s a blessing to come out healthy. You’d be a fool to think that this will be able to go one forever. You can’t think this is the end-all; most guys retire in their early 30s, and there’s a lot of money-making potential, a lot of production you can get out of life after 30 years old. That’s the way I look at it.’’

Not yet 30 and fully intending to play as long as his body allows, Warren returned to the field yesterday for the first time this offseason. He is coming off a year in which he was hampered by a lingering ankle injury, but is pleased with the energy he saw on the practice field and believes that free agent pickups Gerard Warren and Damione Lewis can help solidify the D-line.

He is still taking a class, an online course, and when he completes that, he will be 11 credit hours shy of his diploma. He is confident he’ll take care of those next spring. Warren is eagerly anticipating receiving his Aggie ring, the class ring that all Texas A&M graduates wear, in the fall.

Asked about his choice and whether he’s proud of himself, Warren pulled out an old Chris Rock skit:

“I’m excited I made the tackle, but that’s what I’m supposed to do. So it isn’t a big deal. I’ll throw a party when I graduate but I ain’t threw a party yet.’’