Center has Brady’s back 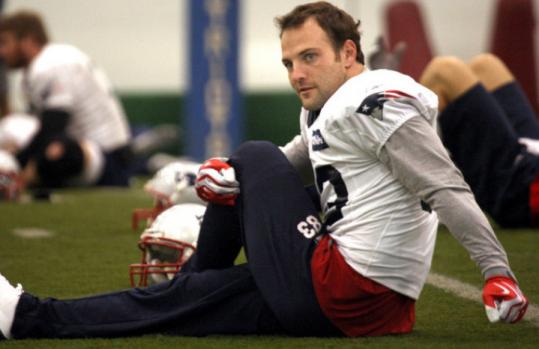 Injured Patriots receiver Wes Welker is being vague about his timetable for getting back in the action. (File/Bill Greene/Globe Staff)
By Shalise Manza Young Globe Staff / May 14, 2010

FOXBOROUGH — Looking as svelte as an offensive lineman can, Patriots center Dan Koppen joined the growing list of current and former New England players defending Tom Brady’s decision not to spend every possible day at Gillette Stadium for the team’s voluntary offseason program.

Brady has been criticized for working out in Los Angeles, where his older son lives, and traveling the globe with his wife.

“I think it’s an individual situation,’’ said Koppen. “Everybody’s got their different things going on, and things change as your life goes.

“This is our job, but it’s not our family — family’s family and work is work. You just have to balance them and I think he does a great job of balancing and doing what he has to do with his family and being here. He’s here as much as he needs to be.

“But there’s no one in that locker room sitting there saying, ‘Oh, Tom’s not here, he’s blowing us off.’ We all understand people have things — a few guys are back in school graduating, what are you going to tell them, they can’t graduate? It’s one of those things. We know they’re working hard.’’

Tedy Bruschi and Drew Bledsoe have also commented on Brady’s behalf, each asserting that the former league MVP is the last guy anyone has to worry about slacking off or not putting in the work.

Koppen is enjoying being around his teammates again, and says the upcoming season has brought a new attitude.

Asked about a lack of leadership on the Patriots last season, Koppen said, “When you don’t get to where you want to go, I think there’s always going to be a lot of questions on what went wrong. But the bottom line is performance, and we didn’t do what we needed to do last year.

“Whether it was all the guys buying in, leadership, putting the extra time in the film room, it all adds up. In order to be better on the field, we’ve got to step up in every phase.’’

End around
Wes Welker continues to use his best evasion moves when it comes to the question of when he will return to the field.

During a brief interview on 98.5 The Sports Hub yesterday (his cell phone dropped twice during the call), Welker was asked if he expects to start the season on the physically unable to perform list, which would make him unavailable until after the sixth week of the season, or whether he’ll be ready to go from Day One in September.

“I’m going to return whenever I’m ready, whenever the doctors clear me,’’ Welker said. “I’m just steadily going about my business and doing the best I can.

“The season’s still pretty far away and we’ve got some time. I’m just going to continue to work hard and do the best I can to get back on the field as soon as I can.

“That’s kind of my plan of action. I’m not going to push it before it’s ready. When it’s ready, I’m going to be out there.’’

Welker agreed with Brady about the team’s lack of mental toughness last season, citing the inability to close out games.

Welker has been making the rounds to promote his football camp for boys and girls next weekend at Thayer Academy in Braintree.

Instant replay
When news came last week that the Patriots had allegedly stood up students at a Connecticut school, the organization initially bore the blame, even though it truly wasn’t their fault.

The Patriots made things up to the students and staff at Lebanon Middle School in a major way Wednesday when Koppen and Bill Belichick showed up for a question-and-answer session and to talk with the kids, and brought along Pat Patriot and a cheerleader for good measure.

The move deserves kudos, especially since it was the New England Food & Dairy Council, which oversees the US Department of Agriculture/NFL “Fuel Up to Play 60’’ program, that claimed responsibility for the miscommunication that led to Lebanon officials believing a player would visit them last week.

“Mistakes happen, and thankfully the Patriots did the right thing and sent Coach and myself down,’’ Koppen said.

“I don’t know how happy they were that I was there, but if Coach came down and talked to you, it’s definitely something you’re going to remember for a long time. The kids were great.’’