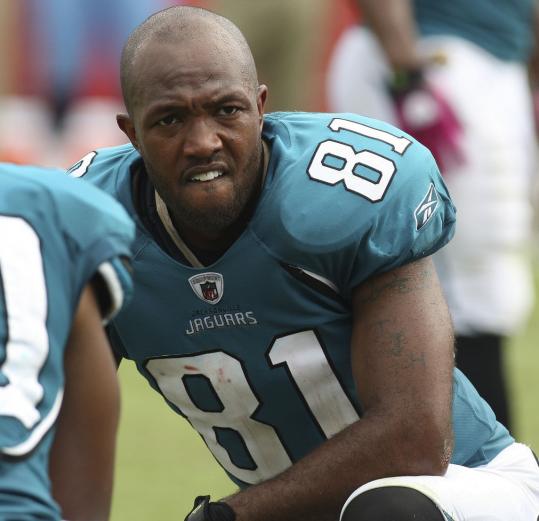 A league source said Holt’s deal is for one year and $1.7 million.

The seven-time Pro Bowler played with Jacksonville last season, and caught 51 passes for 772 yards for a club known more for its ground game.

It was Holt’s first NFL season not playing for St. Louis. From 1999, when he was the Rams’ first-round draft pick (sixth overall), until 2009, Holt averaged 87 catches and 1,266 yards per season. He has 74 career touchdowns.

Holt will celebrate his 34th birthday in early June, but an AFC scout said the former North Carolina State standout has enough left to help New England, which is without a proven possession receiver with Wes Welker recovering from knee surgery.

“The biggest thing with him is he just can’t run the way he used to,’’ the scout said of Holt. “He’s a possession receiver, a great route runner, and he has that veteran savvy.

“But he doesn’t get separation like he used to. You can put him in the slot, and similar to [Pittsburgh’s] Hines Ward, he doesn’t run that well, but on route running and intelligence, he can get open.’’

His ability to run routes makes Holt a safer bet to succeed with the Patriots than the veteran receiver the team brought in last year, Joey Galloway. Galloway still could run down deep balls, but he was not a sharp route runner — a no-no in the New England offense.

Holt is also incredibly durable; he has played in all but three regular-season games in his career.

During an interview with NFL.com last month, Holt said one of the things he wanted in his next team was to play with an “elite quarterback,’’ something he certainly will get in Tom Brady.

Second wind
It may be stretching it to say the worst is over for defensive lineman Myron Pryor and the rest of the Patriots’ second-year players — they are far from finished products, of course — but Pryor is glad his rookie season is behind him.

“It was like everybody said it would be: It was real hard,’’ the 23-year-old Louisville native said yesterday after a workout at Gillette Stadium. “It was real tough. Coaches are hard on you. You have to withstand the pressure, you don’t want to break. There’s a lot of pressure, but once you get through it, it’s a big relief.’’

By most measures, Pryor did just fine. A sixth-round pick out of Kentucky, he played in 13 regular-season games, mostly backing up Vince Wilfork at nose tackle, and finished the season with 23 tackles, two quarterback hits, and a forced fumble. It was a surprise that Pryor, and not second-round pick Ron Brace, was the rookie interior lineman who saw such extensive playing time.

But while he found a way to break into what was a deep and veteran line at the time, Pryor still felt “tons and tons of pressure’’ to excel.

“They want you to learn more than what you can already learn,’’ he said. “They want to put that pressure on to see how do you come out of adversity. And a lot of little things, somebody nicking and picking at you, kind of gets on your nerves, like, ‘Why are you messing with me?’ But it’s all part of [being] a rookie.’’

This offseason, Pryor has been working to get stronger, particularly in his core, and improve his flexibility in an effort to prevent the type of nagging injuries that can derail a player’s season. On the field, he wants to read his keys faster — learning his responsibility and responding to it faster during a game.

With the draft this week, Pryor was asked about his experience.

“I was like, ‘Wow, I can’t believe it,’ ’’ he said. “Seeing my mom and my grandmother, they raised me, they were the only ones that were really there for me — they were bawling down tears, like, ‘Oh my God. My baby.’

“They were all over me. It was a very happy day.’’

Albert R. Breer of the Globe staff contributed to this story; Shalise Manza Young can be reached at syoung@globe.com.