Thomas on the outside 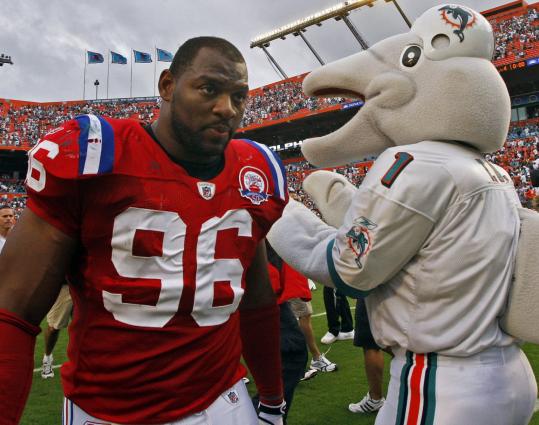 HATTIESBURG, Miss. — Suffice it to say, this is not how Adalius Thomas thought his time in New England would go.

When he signed a five-year, $35 million contract on the first day of free agency in 2007, he seemed to be the ultimate Bill Belichick player — big, fast, and versatile. The assumption was he’d become a Swiss Army knife in the Patriots defense: lining up at outside linebacker, a Willie McGinest-type rush end, sometimes at inside linebacker, or even in the secondary, as he had done on occasion with Baltimore.

But how Thomas may have envisioned his Patriots’ tenure playing out and how it has three seasons in are starkly different.

Right now, Adalius Thomas is essentially a man without a team. The chances of him playing another down for New England seem incredibly slim.

Yet he remains on the roster.

He is in Hattiesburg for his annual football camp today at the University of Southern Mississippi, a free day for area boys to learn about the game and meet someone who has made it to the NFL, has been to the Super Bowl, has played in Pro Bowls.

Over breakfast at a Shoney’s just blocks from the campus, Thomas took the opportunity to give his side after nearly six months of being portrayed as a malcontent. He struggles to grasp where things went wrong.

“Anybody that knows me personally knows that I’m not a bad person. I haven’t had a problem in the 10 years I’ve been in the league; I haven’t had a run-in with any coach. That’s not me,’’ he said. “Am I a ‘yes’ person? That’s not me. I respect the coaches and I respect their position. If you have something that you want me doing, that’s fine. But coaches are going to do what’s best for the organization, or for them. At some point you have to look out for you, so the only person that’s going to do that is you.

“I’m not bitter. At all. But I guess it comes across . . . I don’t think anything I said is untrue, and if it’s not untrue, then why is there a problem?’’

During the infamous Snow Day episode, when Thomas, Randy Moss, Gary Guyton, and Derrick Burgess were sent home for being late for an 8 a.m. team meeting because of winter weather conditions, Thomas’s quip to the media about not having a flying car like in the “The Jetsons’’ to float over the traffic was taken as flippant, though he said he was trying to be funny; his comment that “motivation is for kindergartners, and I’m not a kindergartner’’ was seen as disrespectful.

He acknowledged he could have expressed himself in another way, but his frustration was born in part out of an inconsistency in how such situations had been handled throughout the season.

It was just another event in a series of them, all of which caused cracks in the relationship between team and player.

Thomas broke his right forearm early in a November game against the Bills in 2008. Initially, he told team doctors he wanted to delay X-rays until halftime; he returned to the field for two more series, and during the second he attempted a quick move on an opposing player. That’s when the bone snapped, with breaks in four places. His arm immediately swelled. His season was over.

There are now 12 screws and a plate in his arm. The Patriots sent him to a facility in Tampa for rehabilitation (Thomas has a home in Florida) in early 2009, but he said the woman he worked with was a massage therapist, not a physical therapist who specialized in helping him recover full range of motion in the arm.

Well over a year later, he said his wrist sometimes still bothers him. Next month, he will go on his own to a place in Pensacola, Fla., to try and get it back to normal.

He wondered why he was not directed toward proper therapy in the first place.

“All the things were right, [but] there was probably so much more I could have done. She did what she knew to do. It wasn’t her fault; she was doing a favor. The favor didn’t work out for me.’’

Last summer, Thomas got more news: In his words, he was told he was “not a good pass rusher’’ and that his role would be changing. He had not yet returned to the field from his arm injury, though at the time he was hurt, he had five sacks in 10 games.

The worst was in Week 6 last season, when Thomas was benched for the Patriots’ game against Tennessee. The morning of the game, linebackers coach Matt Patricia — not Belichick — told him that he would not be playing. The staff thought he had performed poorly the previous week in a loss at Denver.

When the topic of his benching came up, Thomas’s voice dropped as he struggled to piece together the circumstances.

“The thing for me is, I got a game ball Atlanta week [in Game 3]. So, that’s what was so mind-boggling. You get a game ball two weeks before, you have a bad game against Denver, and then you get benched the next game. That’s really that’s interesting, for a lack of words. Because I know a lot of people that had more than one bad game. It was shocking. That was like a turn.’’

It isn’t clear why the Patriots haven’t released Thomas. Neither he nor his agent, Bus Cook, has had contact with club officials. The linebacker is not participating in the offseason workout program, but will attend mandatory minicamp in June if he is still on the roster.

He was asked if he believes he’s played his last down with the Patriots.

“I wish I really knew. And that’s the honest-to-God truth,’’ he said. “The only person that knows that would be Bill. I don’t have a clue what’s going to happen, what their plans are, so it’s kind of uncertain. It’s uncomfortable too, because you don’t really know where you’re going to be.

“I’ve had a great time — if this is the end, I’ve enjoyed myself. The fans have been great, it was fun playing there. If it’s not, I’m fine with coming back.’’