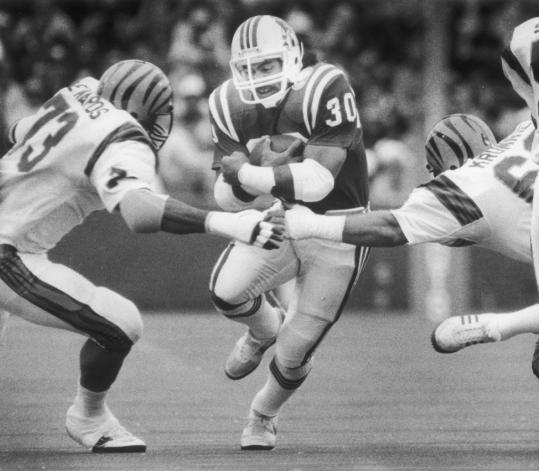 Mosi Tatupu fought for extra yardage after a long gain in 1984 against the Cincinnati Bengals. He was selected to the Pro Bowl in 1986 for his excellence on special teams. (John Tlumacki/Globe Staff)
By Monique Walker Globe Staff / February 25, 2010

Mosi Tatupu, a running back and special teams contributor who entertained Patriots fans for 13 seasons, died Tuesday at Sturdy Memorial Hospital in Attleboro.

The cause of death has not yet been determined. He was 54.

Mr. Tatupu played 13 of his 14 NFL seasons in New England and developed a following of fans at home games called Mosi’s Mooses.

In September, Mr. Tatupu was among a group of former Patriots named to the 50th Anniversary Team that was recognized at halftime of the season opener.

Mr. Tatupu played in 194 games for the Patriots, third-most in franchise history. He was a Pro Bowl selection on special teams in 1986 and ended his career with 2,415 rushing yards and 18 touchdowns on 612 carries.

Patriots owner Robert Kraft said Mr. Tatupu was one of his family’s favorite players when they attended games at the peak of his career. “I don’t think you could watch a Patriots game in the ’80s without becoming a fan of his,’’ Kraft said. “He was a dominant special teams player and a punishing rusher who loved the Patriots as much as the fans did.’’

Mr. Tatupu, who was born in Pago Pago, American Samoa, and later moved to Hawaii, kept his ties to New England, coaching his son, Lofa, at King Philip Regional High School in Wrentham and then in 2002 joining the Curry College coaching staff for six seasons as a running backs coach.

Mr. Tatupu joined the Curry staff when former Patriots linebacker Steve Nelson was head coach and remained on board when Skip Bandini took over in 2005.

Mr. Tatupu stepped away from his coaching duties after 2007 to spend more time with his family on the West Coast, said Bandini.

Lofa Tatupu is now a linebacker for the Seattle Seahawks and lives in that area.

But that did not stop Mr. Tatupu from hanging around Curry’s football team.

He continued to contribute tips to the players and even attended games last fall, said Curry athletic director Vinnie Eruzione.

“No matter how bad things may have been going on the field or in the classroom or off the field, he was able to flip it into something that was a positive.’’

After playing at the University of Southern California, Mr. Tatupu was selected by the Patriots in the eighth round of the 1978 NFL draft.

He eventually established himself on special teams, making such an impact that the Mosi Tatupu Award was established in 1997 by the Maui Quarterback Club and the Hula Bowl for college football’s Special Teams Player of the Year; the award was presented annually from 1997-2006.

In 2003, Patriots receiver Wes Welker won the honor while playing for Texas Tech.

Mr. Tatupu was active in the area, and his death shocked many, including Steve Grogan, his former Patriots teammate who played with him for all 13 years.

“He was one of those guys that did whatever was asked of him,’’ Grogan said.

“He played special teams, and he was probably one of the best ever, but he could also carry the ball, block, catch the ball out of the backfield. He was just a great athlete.

“He had fun in everything he did.’’