THIS STORY HAS BEEN FORMATTED FOR EASY PRINTING
Texans 34, Patriots 27

HOUSTON -- At 12:20 p.m. local time Sunday, Wes Welker sat on the Patriots bench and dabbed at his eyes with a white towel. Welker had removed his helmet and replaced it with a backwards cap. Medical personnel surrounded him. Tom Brady was the first teammate to walk over and pat him on the leg. Others followed.

"I've seen him look like that before," Leland Welker, Wes's father, said from his home in Oklahoma City. "It was always in a losing effort or something like that. It wasn't a good sign."

A cart wheeled behind Welker, and the trainers loaded him on. The cart drove into the tunnel on the other corner of Reliant Stadium. Welker had left a football field for the final time this season.

Not even 20 real-time minutes after kickoff, the Patriots' worst nightmare came true. Welker most likely tore both the anterior cruciate ligament and medial collateral ligaments in his left knee, according a source. Welker will undergo further tests today, but the final outcome appears grim.

Welker's injury, sustained in the first quarter of a game with menial ramifications for their postseason plans, is the same that Tom Brady suffered in last year's season opener. And like Brady's, it struck a potentially devastating blow to the Patriots' Super Bowl aspirations.

Welker had been on the field because coach Bill Belichick decided to play most of his starters, including Brady, who left the game in the second quarter and re-entered after halftime. The Houston Texans still defeated the Patriots, 34-27, after the Patriots blew a 13-point lead by surrendering 21 points in the fourth quarter.

Even if the Patriots had won yesterday, it would have been Pyrrhic victory. After one of the greatest seasons an NFL wide receiver has ever had, Welker may have seen it end in the cruelest way.

"We're sick," Leland Welker said shortly after the fourth quarter began. "We're absolutely sick. We take all those hits and stuff all season long. And then just one fluke cut, and he just blows it out."

Leland Welker had not yet learned of the extent or nature of Welker's injury, but he knew, like anyone who watched the play, that it was bad. Brady hit Welker on a pass over the middle, as he had done so many times this season, on the first Patriots drive of the game. The catch gave Welker 123 on the year, giving him the second-highest single-season total in NFL history even though he had missed two games.

Welker turned up field and tried to elude safety Bernard Pollard, the defender who knocked out Brady in last year's season opener when he played for the Chiefs. Welker planted his left leg, attempting a cut to the right, and his knee buckled.

Welker had endured countless crunching blows this season, and after every one he jumped up and trudged back to the huddle. Yesterday, without having been touched, he crumpled to the ground and he stood only with help. He limped to the sideline, a trainer on each shoulder.

"That hurts," cornerback Shawn Springs said. "It's no secret around the whole NFL how important Wes is to us. My prayers are with him, because I know Wes is one of those guys who wants to be out there all the time. We're going to miss him. He's probably the heart and soul of our team."

Welker endured injuries before, but none like this. During one offseason, he had minor ankle surgery to remove bone chips. Even going back to high school, though, he has never experienced an injury that caused him to be carried off the field.

"This is the worst we've ever encountered," Leland Walker said.

Even without Welker for the rest of the game, the Patriots built a 27-13 lead by the fourth quarter. Fred Taylor scored a pair of touchdowns as the Texans committed a string of miscues. Kicker Kris Brown missed an extra point and two field goals. More damaging, Matt Schaub threw an interception off of wide receiver Jacoby Jones's hands to rookie cornerback Darius Butler, which Butler returned 91 yards for a touchdown.

The Texans stayed in the game because Pollard had recovered a fumble by Taylor in the end zone. Playing to keep their playoff chances alive and for the first winning season in franchise history, they caved. On the sideline, linebacker DeMeco Ryans told his teammates, "If not now, then when?"

With roughly five minutes left, Texans running back Arian Foster plunged in from the 1 to bring the Texans to within one touchdown. On the second play of the Patriots' ensuing drive, Brady -- surprisingly still in the game -- dropped back.

As defensive end Mario Williams drilled him, Brady heaved a long pass down the left sideline. Pollard bolted toward the ball, intended for Sam Aiken. "I was trying to break it up," Aiken said. "I guess I didn't do a good enough job."

Pollard, of all players, leaped and snared the ball and returned it to the Patriots' 23. Foster ran four times, the final carry resulting in a touchdown.

With less than two minutes remaining, Brady left the game for good. Backup quarterback Brian Hoyer replaced him and tried to lead the Patriots for a tying touchdown. He could not, his final pass going incomplete toward Julian Edelman, Welker's replacement, who caught 10 passes for 103 yards.

The Texans needed only a few kneel downs, and the Patriots had lost on the road despite a halftime lead for the fifth time this season. The Patriots will play at home in the first round next week, but they must win at least win road game to advance to Super Bowl.

"We just got to finish better," James Sanders said. "We had opportunities to make plays. And we didn't make those plays. Starting next week, those are plays you got to make if you want to have a chance to move forward."

They will move forward for now without one of their best assets. In Oklahoma City, where he watches the Patriots on television every Sunday, Leland Welker could only hope his son will recover. As for playing this season, it seems, there is no longer even a reason to hope.

As the game crept into the fourth quarter, Leland Welker hadn't spoken to his son. His wife had.

"He was really upset," Leland Welker said. "He didn't feel like talking about it too much."

Albert R. Breer of the Globe Staff contributed to this report 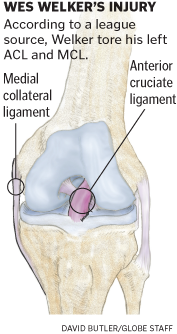