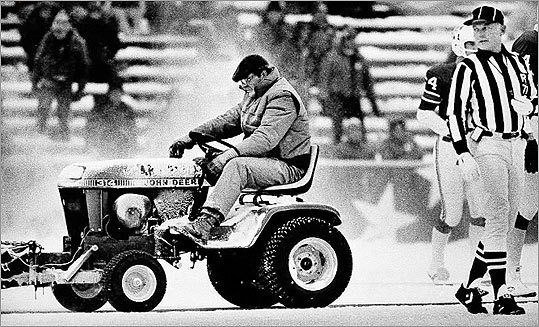 Mark Henderson, a convict on work release, cleared snow Dec.13, 1982 at Schaefer Stadium in Foxborough. Henderson was involved in a controversial play in the fourth quarter when he plowed an area where Patriot kicker John Smith hit the winning field goal. (AP)
By Stan Grossfeld Globe Staff / January 3, 2010

FOXBOROUGH - His moment in the sun (or snow, to be exact) has lasted 27 years.

Just walk into the Hall at Patriot Place, go to the second floor, and look up. There, suspended from the ceiling by steel cables, is the infamous green John Deere tractor and the attached sweeper that made Mark Henderson a part of New England Patriots lore.

It was Dec. 12, 1982, and a wicked storm dumped so much snow on Schaefer Stadium that the Patriots offered a free ticket and $10 to anyone who would help shovel out the seats in preparation for their game against the Miami Dolphins.

“I was doing time for burglary and was lucky enough to end up on a work-release program from [MCI]-Norfolk,’’ says Henderson, 51, making his first visit to the Hall. “My stepfather got me a job with the maintenance crew. We had a meeting before the game, and nobody wanted to run the tractor. I knew I was the low man on the totem pole, obviously, so I volunteered. At the end of the day, everybody wished they had volunteered.’’

Henderson’s job was to sweep the snow from the sidelines and keep the yard markers clear.

With 4 minutes 45 seconds left in a scoreless game, the Patriots had the ball on the Miami 16-yard line. Patriots coach Ron Meyer called a timeout to attempt a 33-yard field goal. Conditions were dreadful. Both teams had already missed field goals.

Henderson was on the sideline, still wet from shoveling. The tractor was nearby, its motor running. Henderson had no clue he would end up providing the ultimate home-field advantage.

“I was freezing my butt off, running in place, trying to create some energy,’’ he says, gazing over at the parking lot where the old stadium used to be. “It was brutal out there.’’

At the same time, Meyer was frantically searching the sideline for him. The timeout was almost over.

“He finally spotted me and comes running after me waving his arms,’’ says Henderson, “and he said, ‘Get out there and do something.’ I knew exactly what he meant, so I jumped on the tractor and proceeded to go out on the 20-yard line, where I was supposed to be.

“Then Matt Cavanaugh, the backup quarterback who was the holder, saw me coming and started clapping his hands. He said, ‘All right! Follow me.’ He showed me the spot he wanted cleared. I just swerved over to the 23-yard line with my tractor, switched on the PTO [power take-off, which starts the brush spinning], and scraped the snow off the AstroTurf.’’

Legendary Dolphins coach Don Shula took one look at the 4-foot swath of green and went ballistic on the sideline.

“I wanted to go out there and punch him out,’’ Shula said years later. “In retrospect, I should have laid down in front of the snowplow.’’

Clearing it up
Though it is known as the “Snowplow Game,’’ there never actually was a plow. The 4-foot-wide brush worked better than a plow on artificial turf.

Nor did Smith ever share the credit. He claimed the sweep didn’t help him make the kick. Henderson bristles at the thought.

“If you look at the film, he definitely put his foot down in the middle of that green carpet,’’ Henderson says proudly.

The Cumberland, R.I., resident is thrilled that he is immortalized in the Hall. Beside the hanging tractor, there’s a display with commentary by Henderson and Smith.

“I didn’t give it much thought at all,’’ Henderson says of his famous swerve. “It was all over in a matter of seconds. I drove to the other side and stood with the cheerleaders in the corner, waiting for the kick. And when it went through, we all jumped up and down, screamed and yelled and hugged each other. It was great.’’

Henderson’s name was flashed on the scoreboard, with the image of him on the tractor.

But Henderson, who admits to having a bratty side, wasn’t through teasing the Dolphins.

“At the two-minute warning, we were still ahead, 3-0,’’ he says. “I decided I was going to clean the outside field again. So I went down in front of the Dolphins bench. I went as slow as I could.

“Quite a few players came out to show their displeasure. I couldn’t even see their faces. They were breathing fire and they were calling me several expletives. I was scared, actually.

“The wind kind of helped me out and I put a whole load of snow in their faces. I gave ’em a real thank you.’’

Patrick Sullivan, who was general manager of the Patriots at the time, told Henderson not to talk to the media.

“Actually, the Sullivans were very scared there were going to be repercussions because Shula was on the NFL rules committee,’’ Henderson says. “Patrick Sullivan told me not to say a word to anybody.

“Of course, the first thing I knew, I was going up the ramp to put away the tractor. There was less than a minute left. The back wheels started spinning as I tried to go up the hill. Just at that moment, the press gobbled me up. I had tape recorders in my face, cameras.’’

He told them he didn’t know who ordered him out there.

The following year, Shula helped institute a rule that made Henderson’s famous zig-zag illegal. But Henderson doesn’t think the Patriots were guilty of cheating.

“I say the Dolphins would have done it if they thought of it,’’ he says. “But if Shula had [looked for] me I would’ve been hiding in a ticket booth. They wouldn’t have found me till Tuesday morning.’’

The game ball was officially presented to Patriots linebacker Steve Nelson. But Henderson also got one later from the equipment manager, complete with the 3-0 score, the date, and the words “Clean Sweep,’’ written across it.

That came with little pomp and circumstance.

“The Sullivans were a little apprehensive to give it to me under the circumstances,’’ he says.

Kicking his problems
Henderson has been reluctant to talk about his past, but he says he was a drug addict.

“He paid his debt to society, and he’s never been in trouble since - nearly 30 years - so I don’t think it’s fair,’’ says his son, Mark, who accompanied his father to the Hall.

The elder Henderson now works as an installer for Mr. Fence in Bellingham. He remains a huge Patriots fan, never missing a game on TV. He wants to do a book about his life so that kids can learn from his mistakes.

“We got shot at by some of the people we were robbing. I was real lucky to get apprehended because I probably would have hurt myself. That saved my life, absolutely.’’

He served 2 1/2 years at various institutions before getting work release for good behavior.

His message about drugs is simple: “Stay the hell away from it - it ruins your life.’’

He credits jail time in New Hampshire - when he was alone in a cell and ate leftovers from a nearby nursing home - as more life-changing than his famous tractor ride.

Before the last regular-season game at Foxboro Stadium, on Dec. 22, 2001, the Patriots decided it would be a great idea to have Henderson reenact the infamous scene.

But they thought he was dead.

“A guy by the name of Mark Henderson, same age as me, died in the late ’90s,’’ says Henderson, who grew up in North Attleborough.

The “other’’ Mark Henderson was from Attleboro and also had a criminal record, thus creating confusion.

A producer located Henderson, but the Patriots, worried about a hoax, asked a couple of their trainers who were still with the team to identify him.

“It kind of fueled the fire of the legend,’’ he says. “I told them, ‘Who would want to impersonate Mark Henderson?’ ’’

Henderson received a standing ovation before the finale, also against the Dolphins.

He says he gets reminded of the incident several times a week. There’s even an Upper Deck trading card and a commissioned oil painting of the scene.

The younger Henderson, who has the game ball, is awestruck by the oddity of the event.

“How often does it happen where a person who is not playing the sport has an impact on a game?’’ he says. “How often is it an average Joe has an effect on the outcome of a game?’’

The father beamed with pride.