They looked coordinated on offense 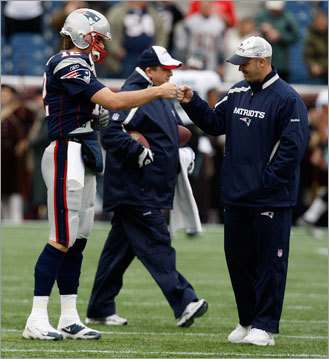 He has the same title, quarterbacks coach, that Josh McDaniels had in his one-year apprenticeship before officially replacing Charlie Weis as offensive coordinator in 2006.

He’s the one Tom Brady consults with between plays, and the one who sends substitutes in and out of the game.

Only he doesn’t have the coordinator title.

The issue, really, has been consistency.

While they’ve exploded at times, the Patriots also have been held to 21 or fewer points six times. In 2006, McDaniels’s first year with the title of coordinator, that happened seven times, but it was with Reche Caldwell and a cast of thousands at receiver rather than Randy Moss and Wes Welker, and a broken-down Corey Dillon was propping up the running game.

The Patriots have scored 400 points this season with Brady back. They scored 410 last season with Matt Cassel.

But with all that in mind, the bigger issue seems to be something that’s more about observers of the team than any member of the offense: This isn’t 2007 anymore.

Brady entered this season coming off knee surgery, and he since has suffered rib and finger injuries. A bunch of players are two years older. Moss and Welker are still stars, but they’ve been nicked as well, and Jabar Gaffney and Donté Stallworth have exited Patriot Place. There has been injury-related offensive-line shuffling.

And yes, replacing McDaniels has been a process.

“It’s inevitable with the way the league works that you are going to lose coaches,’’ said Nick Caserio, the director of player personnel who was McDaniels’s receivers coach in 2007 and his college teammate at John Carroll. “You’re going to lose players. There’s a process you go through in the offseason, so it’s ongoing.

There’s plenty of proof there.

In their 35-7 win over Jacksonville, the Patriots averaged 7.5 yards per play, rolled up 464 total yards, and showed exemplary balance (23 passes, 19 runs) through their final touchdown, and scored on the first play of the fourth quarter. Then, when they needed to finish the job, the offense was able to line up and pound the Jaguars into submission with a 20-play, 12-minute drive that left 29 seconds left on the clock.

Safeties playing deep to protect against Welker and Moss? Sammy Morris makes an outside zone run for 21 yards. The defenders creeping up? Brady runs naked bootlegs off play-action to get near paydirt on the team’s first possession (with a 14-yard gain to Benjamin Watson), and hit paydirt (17 yards to Moss) on that final scoring drive.

After the game, Brady said it was receivers getting open and “great play-calling.’’ That was significant, because it was the first time the quarterback had praised the play-calling all year.

And so, with the eye test saying strides were taken by O’Brien on Sunday, Brady’s words carry even more significance.

Defensive coordinator Dean Pees held the same position at Findlay, Miami of Ohio, Toledo, and Michigan State, and served as head coach at Kent State before taking his current post in 2006. On top of that, he’d been linebackers coach in Foxborough in 2004 and ’05, giving him background with the team and the NFL.

“I’d been in situations where I’d called defenses and had to make calls within a few seconds in the two-minute, where if you’d never been a coordinator, the first time around those things can get you pretty excited,’’ Pees said. “So I think that was certainly helpful, having that background coming here.

“And then the second thing was being able to be here for two years with Romeo [Crennel] and with Eric [Mangini] and just kind of seeing how the whole thing operated and how Bill [Belichick] operated and how things were done on game day, but also during the week and the whole deal there. It wasn’t like, OK, I came out of college and all of a sudden I was named the coordinator here and boom, it’s thrown at you.’’

The transition that O’Brien has gone through, moving from receivers to quarterbacks, and taking on more game-day responsibility, is nothing new in the NFL.

Defensive coordinator Rex Ryan left Baltimore to become head coach of the Jets, and the Ravens defense only recently has gotten back to its accustomed level, silencing some of the criticism of Ryan’s replacement, Greg Mattison. Steve Spagnuolo, similarly, bolted New York for the Rams, and there’s no saving Bill Sheridan from the firestorm of tough takes on the Giants’ defensive problems.

Was Sunday’s performance due in part to the maturation of O’Brien as a play-caller? It’s hard to tell. But it wasn’t hard to see that the unit played as complete a game as it has in months, and, at the very least, that reflects well on the man with the play sheet.

“I think in the end it came down to real good execution by our players offensively, and there were some things that kind of fell in our favor, the way the game went, the way the plays matched up,’’ Belichick said. “I don’t think it was anything that was necessarily a great strategy on our part or anything, it just kind of worked out that way.’’

And “that way,’’ at least on Sunday, seemed to work out well for O’Brien.