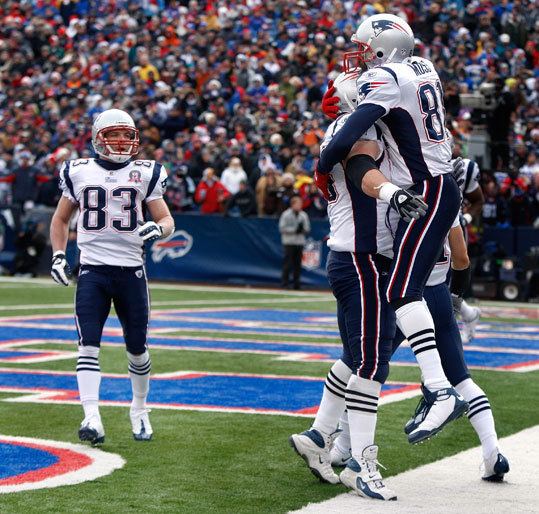 ORCHARD PARK, N.Y. - The Moss-shank Redemption Tour rolled through Ralph Wilson Stadium yesterday and Randy’s people no doubt were happy with the returns.

The Patriots staggered to a grotesque 17-10 victory over the hideous Bills, winning their first legitimate road game (and it only took them until Dec. 20), and virtually locking up the soft-shell AFC East. On a day when Tom Brady looked like J.P. Losman, Moss returned to the land of the living with five catches for 70 yards, including a nifty 13-yard tippy-toe grab in the back of the end zone.

Moss hasn’t been saying much for publication in the last month, but he had something on his mind after this one, and he was already in full rant as he burst into the interview room bound for the podium.

“I’m gonna make it real brief,’’ Moss started. “Y’all had two weeks to do y’all’s talking; let me do mine. It has been a really tough couple weeks, but you move on. That is the nature of this game. I am happy that we got this victory and I appreciate all the support from my true fans, the players, the coaches, my family, and loved ones. I have been in this league for 12 years and I have been through a lot. These shoulders I have on my body, you could put the Earth on it. Just to let you know, I bounce back. I appreciate it.’’

That was it. He was done and then he was gone, followed to the stage by Brady.

“He’s a big part of our team,’’ said QB 12. “So much was said about him in the last week. He came back and showed everybody the character he has. My father always said that the tall trees experience the high winds.’’

So we have Pa Brady joining the chorus line of Moss defenders, which stretches all the way from Canton, Mass., to Canton, Ohio. Every person associated with the Patriots came to Moss’s defense last week, and several members of the team’s national media cartel also attempted to convince us that Moss didn’t tank against Carolina.

I’m told that this week Sandra Bullock will announce that her family is legally adopting Moss, and Rep. Ed Markey will have it read into the Congressional Record that “Randy Moss did not quit against the Carolina Panthers.’’

In the three games leading up to yesterday’s, Moss had three, two, and one catches, respectively. His lone grab against the Panthers resulted in a fumble. We’ve seen clear demonstrations of alligator arms, quitting on pass routes, refusing to block, and making little effort to prevent interceptions. After the ghoulish loss at Miami, Moss was one of the four players sent home when they were late for a meeting on a snowy morning.

Then came the Carolina sitdown strike, when he was booed at Gillette Stadium.

Then an avalanche of media and talk-show criticism.

Then the seeds of the Moss-shank Redemption Tour. Randy backers started popping up all over the Internet and airwaves. Suddenly we were being told that Moss actually played spectacularly against Carolina.

It was a transparent but necessary plan to keep Moss engaged. And that’s why Belichick sounds like Terry Francona in the days when Tito would defend Manny Ramirez. The Patriots, you see, don’t have a lot of other offensive weapons. They need Randy. Wes Welker needs Randy. The Patriots are like the parents of a wild teenager - trying to enforce rules without losing the kid altogether. It’s a delicate balance.

They made Moss a big part of their early game plan against Buffalo. They let him run underneath routes. They stopped using him exclusively as a decoy. And Moss made some nice catches. He drew an important pass interference penalty. He tried to talk himself into the game on a goal-line series. He got open on a hitch-and-go in the second half but Brady underthrew the ball. He even blocked a couple of guys.

But it’s easy to look good against the Bills. Any lead over Buffalo is insurmountable. The Bills buried themselves with 11 penalties for 124 yards. Even the guy who counts the house quit. The announced attendance was “70,000’’ (can’t you just hear the guy saying, “Just round it off at 70,000. I’m outta here!’’?). The Patriots have beaten the Bills 13 straight times and 18 of the last 19.

Gratuitous aside: Buffalo deserves to keep losing as long as it features O.J. Simpson’s name and number on the Wall of Fame underneath the big videoboard.

After the game, the first two questions aimed at Belichick were about Moss.

Naturally, Bill wouldn’t take the bait. He’d certainly never admit that the Patriots made a conscious effort to get Moss involved in the first quarter.

“It was no different than any other game,’’ Coach Hoodie droned. “That’s just the way it worked out.’’

“Was it good to have Randy contribute?’’ someone asked.

“It’s good to see everybody contribute,’’ said Belichick. “He’s been one of our most consistent players the last three years.’’

It’s especially important to keep Randy Moss happy. That’s what the Moss-shank Redemption Tour is all about.