Act 2: No apology from Thomas 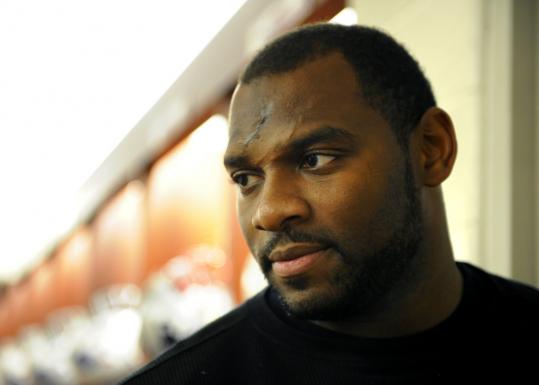 FOXBOROUGH - Linebacker Adalius Thomas expressed confusion in place of contrition while explaining his tardiness to a Wednesday morning meeting, underscoring the tension simmering between some veterans and coach Bill Belichick as the reeling Patriots prepare for Sunday’s game against the Carolina Panthers.

“I can’t figure out what Bill thinks or knows,’’ Thomas said. “I don’t know. I promise you I don’t. I’m dumbfounded. I really don’t try to figure it out. Whatever I’m told to do, that’s what I do.’’

Thomas, one of four players Belichick sent home Wednesday for arriving late, said he believes he acted appropriately and “there’s nothing to really apologize about.’’

Thomas believes the weather gave him - along with Randy Moss, Derrick Burgess, and Gary Guyton, the three other disciplined players - a valid reason for not arriving on time. Thomas got stuck in traffic caused by snow.

Thomas said he nearly got into an accident and he notified the Patriots that he would be late. In the past, Thomas said, calling ahead to explain a tardy arrival was accepted. When he arrived at “8:09 or something like that,’’ Thomas said, Belichick told him to leave the facility for the day.

Thomas traveled by himself, but said one of the other three players was present when Belichick ejected him. Thomas still could not understand why yesterday, and he used both defiance and humor to make his point.

“There’s one thing about Mother Nature - you can’t control that,’’ Thomas said. “You can’t run people over getting to work. There’s nothing to apologize about. I wasn’t trying to be late.

“You leave home, there are people there, cars sitting in the road, you’re sitting there, what are you gonna do? It’s not the Jetsons. I can’t jump up and fly.’’

Belichick could have pointed to the roughly 50 Patriots who found a way to arrive on time. According to one Patriot, Belichick gathered the team at the end of Wednesday’s practice and told them, “It’s not summer anymore. It’s New England in December. Plan accordingly. An 8 a.m. meeting is still an 8 a.m. meeting.’’

This marks the second time Thomas and Belichick have opposed one another this season. Against the Tennessee Titans in Week 6, Belichick made Thomas inactive even though Thomas was healthy.

Thomas has 28 tackles and three sacks this year. His season has been “real frustrating,’’ he said.

“But it is what it is. That’s one thing about being a professional. It’s good things and it’s bad things. It’s just not a good time.

“I don’t want people to think . . . it was put out there like I just didn’t show up and didn’t have a reason, and nobody knew. That’s not true. That’s not the case at all. I was trying to be a professional.’’

Even if the apparent strain between Thomas - the lone late arriver to speak with reporters - and Belichick escalates, it will be difficult for the Patriots to cut him. In 2001, Belichick released Terry Glenn, another high-profile and insubordinate player, in midseason. (The Patriots went on to win the Super Bowl, while Glenn surfaced in Green Bay and then moved to Dallas, where he enjoyed several productive seasons.)

But this situation is different. The Patriots are responsible for $4.4 million in guaranteed bonuses for Thomas each of the next two seasons, a total of $8.8 million that counts against the salary cap if Thomas is cut.

But the league is currently scheduled to operate without a salary cap in 2010, which alters the ramifications. Cutting Thomas, according to league sources, would force the Patriots to add all of the additional $8.8 million of Thomas’s bonus to this year’s salary cap. That makes releasing him prohibitive.

So for the next month at least, Thomas will remain a Patriot. Yesterday, Thomas chafed at the notion that Wednesday’s dismissal was motivating.

“Motivation is for kindergartners,’’ he said. “I’m not a kindergartner. Sending somebody home, that’s like, ‘You’re expelled until you come back and make good grades.’ Get that [expletive] out of here. It’s ridiculous.’’

In the middle of Thomas’s 10-minute session with a throng of reporters, healthy-yet-inactive cornerback Shawn Springs walked past. Springs peered over the pack and in a playful voice called out, “Sorry, AD.’’

Then he continued to answer questions. Thomas explained that he had watched several Panthers games to keep up with film study.

Thomas emphasized that he would continue to do what he was told, even while some of his answers seemingly poked at Belichick’s authority. Rarely has that happened in Foxborough, but then, these are not normal times.

The Patriots have lost three of four games for the first time in seven years. One player speculated Belichick sent home the four players to make clear the “urgency’’ of the moment.

“It’s been pretty rough,’’ linebacker Jerod Mayo said. “But we have to right the ship, and that’s the plan.’’

Christopher L. Gasper of the Globe staff contributed to this report.