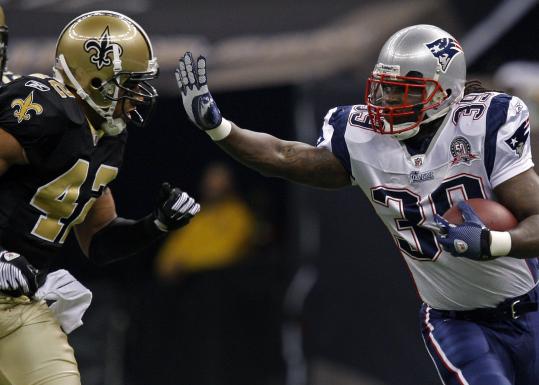 Patriots running back Laurence Maroney uses a stiff-arm to try to keep Saints defensive back Darren Sharper at bay during a first-quarter gain last night at the Superdome. (Jim Davis/Globe Staff)
By Bob Ryan December 1, 2009

NEW ORLEANS - Viewed in the abstract, what was the big deal?

But it clearly was. Last night’s game, in which the Saints beat the Patriots, 38-17, had a classic pregame buzz. What general sports fan in America wasn’t aware of it? Who wasn’t taking sides? The Saints vs. the Patriots had become the Game of the Year, at least until the next Game of the Year, which very well could be the Game of Next Year, because it might be a Jan. 24 NFC Championship Game, pitting the undefeated Saints against the once-beaten Vikings. And let’s not even dream about a Super Bowl featuring the undefeated Saints against the undefeated Colts.

Anyway, the game was dripping with hype, for two reasons. The first was that it represented perhaps the last realistic opportunity for someone to keep the Saints from going undefeated. Sure, Dallas would be considered to have a chance to upset the Saints when they arrive in the Superdome Dec. 19. A chance. Other than that, where’s the possible L on the Saints’ remaining schedule that also includes at Washington, at Atlanta, and at Carolina, along with a home affair with hapless Tampa Bay?

Reason No. 2: the opponent was the New England Patriots.

The fact is we’re closing in on five years from the Patriots’ third Super Bowl championship, but the national aura and mystique is still there. There are three 8-3 teams and four 7-4 teams, and none of them would have had people this fired up about their presence last night in the Dome. The only 7-3 team in the National Football League that can do that is your New England Patriots.

Sure, they threw in a clunker last night, but every once in a while it is good for New England sports fans to take stock, to step back and acknowledge that they have been embarrassingly blessed here in the early 21st century. C’mon, now, what if, on Dec. 31, 1999, someone had told you that on the morning of Nov. 30, 2009, the Patriots - the Patriots! - had just gone 104-34 since the beginning of the 2001 season, had won three Super Bowls, and had lost another in excruciating fashion after becoming the first team since the 16-game schedule to win all its games?

The response, in some form, would have been “No way!’’ You know it, and I know it.

That’s where we were, of course, before last night’s game. There might not have been a Super Bowl victory in four-plus seasons, but the Patriots still were being held in extremely high regard, which is not to say they had become beloved. Not since that first Super Bowl have the Patriots been admired. The charm of the entire team running out during introductions to Super Bowl XXXVI long has worn off, replaced by a perception that the Patriots are haughty, arrogant, and the beneficiaries of various nefarious practices orchestrated by their coach. The high school and college coaches out there still may hold up the Patriots as a paragon of gridiron expertise and excellence, but the American public has cast them in a villain’s role. They may have replaced the Yankees as America’s most hated sports team.

But people sure love to watch ’em play.

Good NFL fans may loathe the Patriots, but they also respect, and perhaps even fear them. Millions tuned in last night hoping the Saints, who they may or may not care about, would win, if only because they didn’t want to see New Orleans’s bid for an undefeated season stopped by the dreaded ugh, Patriots.

As long as Bill Belichick is the coach, the Patriots are never going to shed that national image. Perception is reality, so ill-informed members of the national media paint an image of him as being media-phobic and uncooperative, when there isn’t another coach in the league so hopelessly in love with football that he simply cannot stop expounding on the intricacies of the game he has studied so carefully for more than 40 years, whether the folks with the notebooks, cameras and microphones understand exactly what he’s talking about or not. The fact is nobody sells NFL football more passionately, or articulately, than Belichick on a daily, weekly, monthly, and annual basis.

But people still go around saying he doesn’t “talk to the media.’’ Nonsense. He just happens to be at his worst immediately after a game. The rest of the week, he’s fine. Just don’t expect to find out about injuries or why someone wasn’t activated. You wanna talk pure football, he’s ready.

None of this seeps out to the national media, which has framed Belichick as the evil genius in the hoodie. They do know he’s smart, but he’s even smarter than they think.

So never take him, or what this team has done in this past decade, for granted. Bill Belichick and Tom Brady, his extension on the field, have won three Super Bowls and have kept the Patriots at a high competitive level. People know Brady was out last year and they know he was not his usual self during those early-season losses to the Jets and Broncos and that the loss to the Colts very easily could have been reversed. People out in the Great Beyond still thought the Patriots were the Patriots.