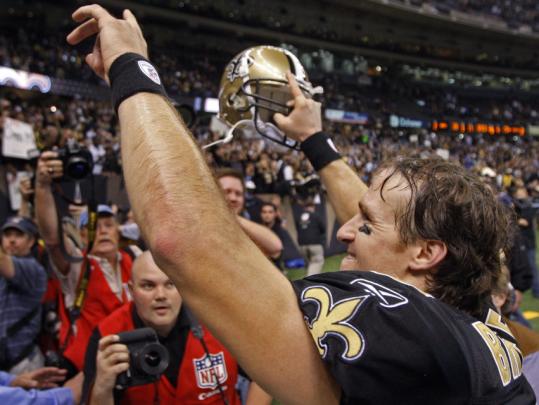 Drew Brees could finally celebrate when it was over, his 371 passing yards and five touchdowns electrifying the Superdome crowd. (Jim Davis/Globe Staff)
By William Kalec Globe Correspondent / December 1, 2009

NEW ORLEANS - The NFL’s new face of possible perfection has a birthmark on his right cheek, perhaps appropriate in a town where blemishes are often dismissed as charm.

Predictably, Drew Brees was guarded all week when asked about the matchup with Tom Brady, choosing to direct attention away from the two headliners behind center. Despite the lack of verbal buildup Brees managed to entertain, turning the Superdome’s plastic grass into his personal Skee-Ball ramp by racking up numbers at video-game pace.

More importantly, he’ll be quick to tell you, his team got the win.

Brees added another chapter to this developing chicken-soup story, directing the Saints past arguably the most difficult date that remained in their pursuit to match the 2007 Patriots’ 16-0 regular season.

“It only counts as one win on the stat sheet, but emotionally these types of wins can mean a little bit more,’’ Brees said. “Obviously, we played a really good football team tonight, a team that year-in and year-out is a championship contender. They know how to win. They do things the right way. And any time you can go up against a team like that, and win, and win the way that we did, it just helps build confidence for you.’’

On the first play from scrimmage, Brees dropped a 33-yard pass just over Devery Henderson’s shoulder, beginning a drive that concluded with John Carney’s 30-yard field goal. An aerial display seemed certain. From there, though, Saints coach Sean Payton hesitated to push Brees, choosing instead to lean on running backs Pierre Thomas and Mike Bell.

Brees began to get warmed up early in the second quarter, letting Thomas do most of the work on an innocent dump pass that turned into an 18-yard touchdown. On the Saints’ next possession, Brees located Henderson again - this time noticeably uncovered beyond the Patriots secondary - and threw a safe pass that the receiver had to briefly wait on before completing the 75-yard score untouched.

“You guys can write about the hierarchies and all that stuff,’’ Payton said. “I thought [Brees] was outstanding tonight. I thought he was special. Let’s just say he’s playing real well. It was a great job by him.’’

For his next touchdown toss, Brees upped the degree of difficulty when he hooked up with Robert Meachem on a 38-yard post pattern. On the play, Meachem beat defensive back Jonathan Wilhite.

Brees added two more touchdowns in the second half, to Darnell Dinkins and Marques Colston - the latter stirring a chorus of “Who dat?’’ chants from the crowd. Brees didn’t play favorites, either. By the end of the third quarter, no receiver had more than three catches.

But afterward, Brees’s intangibles received just as much attention from teammates as his statistical superlatives. Leadership, poise, and confidence were all popular talking points.

Brees even went above and beyond and had T-shirts printed before this season, distributing one to every locker in the Saints’ suburban facility.