The stars aligned, only thing to do now is fill in the blanks 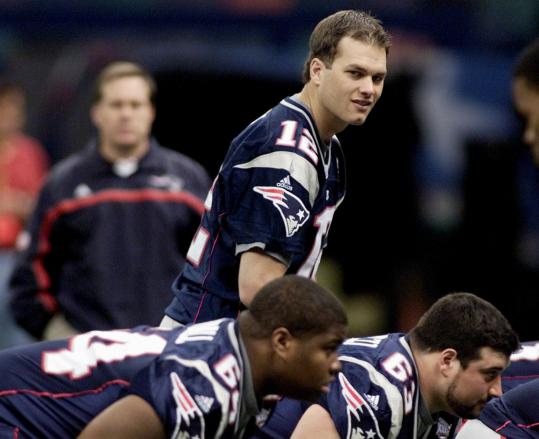 Tom Brady, under the watchful eye of Bill Belichick, participates in a walkthrough prior to Super Bowl XXXVI at the Superdome. Neither the quarterback nor the coach will have much time to reminisce about that memorable victory when they return to the scene tonight for a highly-anticipated matchup with the Saints. (2002 File/Mike Seger/Reuters)
By Adam Kilgore Globe Staff / November 30, 2009

NEW ORLEANS - Bill Belichick is not a man who mixes sentiment and work, which means one opportunity he has tonight likely will remain unfulfilled. Moments before kickoff, if he wants to, Belichick will be able to gaze around and replay one of the seminal days of his career.

The last time he stood on the Louisiana Superdome sideline, the Patriots won Super Bowl XXXVI and launched an NFL dynasty. But Belichick is not a coach who looks back, and the opponent leaves no room for nostalgia.

“I don’t know what will be going through my mind then,’’ Belichick said. “Right now, it’s really just focusing on New Orleans. It’s a huge game.’’

Following their coach, the Patriots will dismiss the subplots hovering around their showdown against the Saints and focus on a game that presents enough imminent concerns on its own. Two weeks after collapsing in the fourth quarter against the unbeaten Colts, the Patriots will receive another chance to notch a defining victory tonight, when they face the undefeated Saints on “Monday Night Football.’’

A victory over the dominant Saints will fill the void the loss to the Colts left. The Patriots will have to earn it against a team playing what might be the most anticipated game in the history of its franchise.

The Patriots only have beaten two teams with winning records, the Falcons and the Ravens, and they’re both 6-5. The Patriots allowed their most recent chance for a statement victory, at Indianapolis, to slip away.

The Saints may present a more complete challenge. They hardly have been challenged this year, winning games on average by more than two touchdowns. While the Colts rely on Peyton Manning and their prolific passing game, the Saints average more than 150 yards rushing, and their defense has forced 29 turnovers.

“Indianapolis does one thing great,’’ Patriots safety Brandon Meriweather said. “This team does everything else great.’’

The Patriots and Saints have been perhaps the league’s two most dominant teams. Though New England has lost three times, it has outscored opponents by 126 points, the second-highest margin in the league. The highest, not surprisingly, belongs to the Saints, who have outscored foes by 165 points this season, an average of almost 17.

While the Saints and Patriots share space on the top rung of the NFL’s hierarchy this season, a chasm exists between their historical track records.

The Patriots have played in four Super Bowls and 17 playoff games this decade. In their 43d year as an NFL franchise, the Saints have played eight playoff games; they’ve won two. They have, literally, never been this good, and now they are welcoming in the team that, more than any other, represents power in the NFL.

The most important Saints game ever played in the Superdome came in 2006, the first contested there after Hurricane Katrina. The significance that night, of course, derived from wrenching civic reasons. From a strictly sporting standpoint, no regular-season game ever has been more anticipated in New Orleans.

The city, already whipped into a festival after the Grambling-Southern Bayou Classic Saturday afternoon, has responded accordingly. Nosebleed tickets are re-selling for close to $500. Conversations between strangers in the city typically end with a high-five and a “Who dat?’’

“It’s good for the whole state to see how they’ve come along together as a team,’’ said Patriots running back Kevin Faulk, who grew up in Carencro, La., and played at Louisiana State. “The whole state has really been looking for this for a while.

“You can just tell by the fans. You just look at the sold-out games they’ve had at the Superdome. The fans, they always have loved the Saints. They just hadn’t had much to cheer about.’’

The excitement will create a deafening atmosphere inside the Superdome, the kind the Patriots have not yet conquered this year. They officially have a 1-3 record on the road, but the win came in London against the Buccaneers.

The Patriots can block the Saints from matching New England’s 2007 perfect regular season and take a step toward ensuring they remain the only 16-0 team in league history. But that is nothing more than a sidebar to them. When Dan Koppen was asked if not allowing the Saints to match their 2007 record would serve as motivation, he spoke for the rest of the locker room, saying, flatly, “No.’’

“The fact that the team we’re playing [tonight] has [gone undefeated] recently, you heard about it more,’’ Saints safety Darren Sharper said. “But before that, you didn’t hear about a team going undefeated. You didn’t imagine a team doing that. And to have a chance to be able to do that is something you have to cherish, appreciate, and go out there and take the task head-on and know that it’s not going to be easy.

“But if you do accomplish that goal, it’s something no one can take from you.’’

For the Patriots, there are more urgent stakes. A victory will pronounce them among the NFL’s elite and position them for a run at a first-round playoff bye. A defeat would leave them less sure of a postseason spot.

The last time the Patriots traveled here, only three players currently on the roster played. Matt Light, Faulk, and Tom Brady are the only remaining Patriots who played in Super Bowl XXXVI.

“It’s a great environment, a historic place to play, and I think we’re all excited.’’