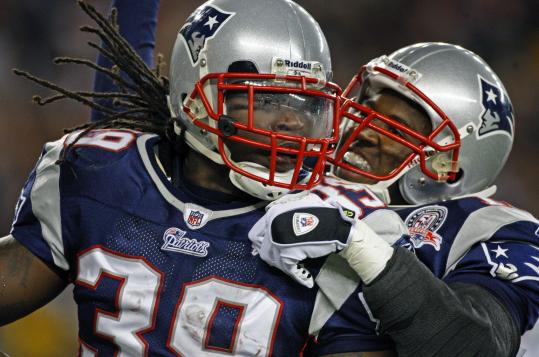 FOXBOROUGH - Laurence Maroney owns two streaks after yesterday. One he would like to continue next week, the other he could live without.

For the first time since the Patriots drafted the running back in the first round in 2006, he has a rushing touchdown in five consecutive games. But he also has a fumble in back-to-back games.

Maroney is the first Patriot in a decade to score a rushing touchdown in five straight games, the third-longest streak in team history. The last player to do it was Robert Edwards, who scored in six straight in 1998. Curtis Martin owns the team record with seven straight in 1996.

While the Patriots await the healthy returns of Sammy Morris and Fred Taylor to their running back stable, Maroney has handled the bulk of the duties. Yesterday, the 5-foot-11-inch, 220-pounder rumbled for 77 yards on a season-high 22 carries and two touchdowns. It was the third time Maroney has rushed for two touchdowns in a game, the first time since 2007.

The performance was key for Maroney, who fumbled on the 1-yard line against Indianapolis, eventually leading to a Colts touchdown in the 35-34 loss last Sunday night. Maroney said last week he had to move on from the fumble.

“You can’t hold your head down about it, you have to go out there on the next play and make a big play,’’ Maroney said Friday.

Maroney had to channel that philosophy again yesterday. In the first quarter, he lost the football after a 2-yard gain to the Jets 36. New York linebacker Bryan Thomas recovered on the 34. Patriots coach Bill Belichick challenged the ruling, but the decision was upheld.

Any damage from the fumble was avoided when cornerback Leigh Bodden intercepted a Mark Sanchez pass four plays later and returned it 53 yards for touchdown, giving the Patriots an early 7-0 lead.

Entering the Colts game, Maroney had one fumble in 508 touches, but yesterday’s drop was his second in eight touches.

Maroney’s confidence didn’t waver, as he continued to handle most of the carries. In the second quarter, he rushed for a 2-yard touchdown to cap a seven-play, 59-yard drive.

Running back Kevin Faulk said it is imperative for players to bounce back after a miscue with a positive action.

“It’s very important to know that you have the coach’s confidence,’’ Faulk said. “You may have fumbled one time but he still has the confidence to give you the ball again.’’

The Patriots went back to Maroney, who picked up 35 yards on nine carries in the fourth quarter. He added a 1-yard touchdown with 5:06 left in the game that boosted the Patriots’ lead to 31-14.

With an offensive line that was shifting personnel because of injuries, they had to maintain a base for the running backs for the overall production of the offense.

“You have to keep a balance to keep the defense on their heels a little bit,’’ center Dan Koppen said. “Changing it up on them really helped us and the coaches did a really good job with play calling today and [Tom] Brady sat back in the pocket and did what he could.’’

Maroney is seeking to become a reliable weapon as the Patriots await the return of Morris, who was back at practice last week, but was inactive yesterday and has not played since injuring his knee against Tennessee Oct. 18.

Maroney last carried the ball 20 times against Miami Nov. 8, picking up 82 yards in the victory and adding a touchdown.