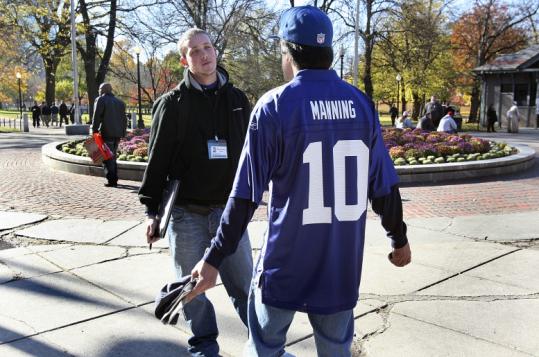 And to think this used to be Titletown.

These days, it’s not just that our teams no longer win the big game. It’s who is winning in their stead: The Yankees are the World Series champions, the Lakers own the NBA title, and the Indianapolis Colts are galloping toward a possible undefeated season. In Boston’s recent run of championships, these were the teams we used to beat to get there.

Before our eyes, a decade of dreams come true is becoming a succession of nightmares. The question yesterday morning, after Sunday night’s brutal 35-34 loss to the Colts, was whether all that winning, all those titles, have made a once embittered fan base gracious in defeat.

To find out, a Globe reporter donned the gear of recent Patriot killers, the Colts and the New York Giants, whose 2008 Super Bowl upset ruined what would have been the first perfect 19-0 season.

And the answer is a resounding no.

“No! No! No! No! NO!,’’ Anthony Coviello shouted when he spied the Colts hat on Boston Common. “You shouldn’t have won that game. We should have had that. That’s what we’re known for!’’

Coviello, who was signing up sponsors for Save the Children, was a tad more charitable than the man who boomed from his car as it zoomed past the reporter on Tremont Street: “Manning, take a hike!’’

It quickly became apparent that fans who have grown used to championships are having difficulty accepting the idea that the mystique that accompanied the magical run of titles from 2002 to 2008 seems to have left town.

“I want to win every time,’’ said Patrick Ryan, 28, of Quincy, voicing a commonly heard theme yesterday as he sipped a soft drink outside Sullivan’s in South Boston. “Winning is everything.’’

At first, Ryan didn’t even want to talk to the apparent Manning brothers lackey. “No. No. No. Don’t even look at me,’’ he said.

And he was one of the friendlier ones.

“You’re in the wrong city, man,’’ said a young man in a Lids shop in Downtown Crossing.

“Your head’s going to burn,’’ commented a construction worker on a site on Essex Street.

And then there were the three guys in a sedan on Washington Street who spied the Colts hat on the head of the Globe reporter as he tried to drive out of a parking lot. They cut off his car, stopped, and stared.

About that Colts gear: It’s not an easy thing to find a Peyton Manning jersey in Boston. The only ones available were at a Champs store in Downtown Crossing, and they were children’s sized.

And the atmosphere was not exactly welcoming for people who wanted to acquire one. At the store, some customers were jeering a man who happened to arrive wearing a jersey of the Colts quarterback. “I just got it because it matches my pants,’’ the man bleated plaintively.

The reporter settled on the No. 10 jersey of Eli Manning of the Giants, with a Colts hat. For good measure, he purchased a newspaper proclaiming the Pats’ defeat Sunday night (“I can’t believe we lost like that,’’ the newsstand guy said. “These are the games we always used to win.’’).

“These games are fixed,’’ Johnson said, commenting on Patriots coach Bill Belichick’s instantly infamous decision to go for it on fourth down and two from the Patriots’ 28-yard line. “That’s the only explanation.’’

Johnson’s comment was consistent with another commonly expressed opinion yesterday: Jealous of the Patriots’ success over the years, the rest of the nation wants to see them lose.

Jonathan Gottleib of Natick, who was hurrying along Washington Street in Downtown Crossing, uttered a refrain from what everyone thought was a bygone era: “We’ll see what happens next year.’’

Sara Graham was the lone exception to the hostility and surprise that greeted the reporter’s alien attire. She stopped her run through Boston Common to offer a compliment.

It figured. She is from Indiana.