This was too bloody easy 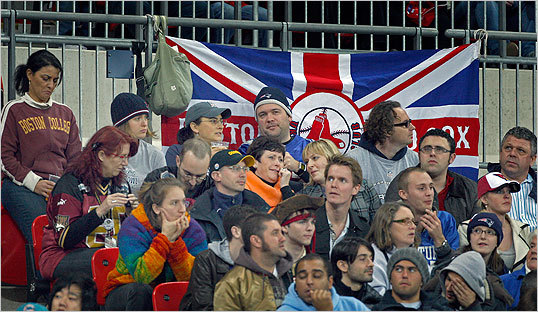 (Globe Staff / Jim Davis) Some Patriots fans at Wembley Stadium are happy to display a banner with the Red Sox logo in the middle of a Union Jack.
By Dan Shaughnessy Globe Columnist / October 26, 2009

LONDON - They could have saved the trouble and played this game at Raymond James Stadium off Dale Mabry Highway. They could have played at Gillette, White Stadium, or Fitton Field in Worcester.

But no. Instead, they had to fly more than 3,200 miles over the Atlantic to affirm what we already knew: The Patriots are a much better football team than the Tampa Bay Buccaneers. Yesterday’s 35-7 thrashing was a ghastly unfolding of the obvious.

A throng of 84,254 filled historic Wembley Stadium but seemed most interested in the wave and the Buccaneer cheerleaders as New England sprinted to an easy win for a second consecutive week. Imagine what 35-7 looks like to soccer folk; it’s like a million to zero. Amazingly, a lot of the fans stayed till the finish.

“The wave went on for about 10 minutes,’’ said Tom Brady (three touchdown passes, two interceptions). “You don’t see that in the States too often.’’

Switching from snowy Foxborough to the slippery pitch of Wembley did nothing to stall New England’s dominance of NFL paupers. On the heels of 59-0 vs. the Titans, the Patriots went ahead, 21-0, at Wembley, making for an aggregate 80-0 over 5 1/2 quarters against a pair of Roger Goodell’s Tomato Cans.

It was a dog of a game, played in perfect football weather in front of folks who may or may not have known what they were seeing.

“It was a fun experience for all of us,’’ said Brady. “We don’t get to spend as much time together as we had - spending 10 meals together and all sitting on the plane together . . . It will probably never happen for us again, so we’ll retire 1-0 internationally.’’

QB 12 was buoyant because he sees how this is trending. The Patriots are 5-2 going into their bye week, with a rough patch of games in November. The quarterback senses his team is coming together, on and off the field.

Brady was one of three Patriots pictured on the giant banner hanging outside Wembley. The image of the quarterback was displayed alongside linemen Matt Light and Vince Wilfork (at 325 pounds, given the current exchange rate, Wilfork translates to $532 dollars).

Fans entering the stadium were given Tampa Bay flags, a concession to the Buccaneers’ status as official home team. Page 100 of the official Gameday Programme (yes, that’s how they spelled it) featured a handy-dandy glossary headlined, “If tonight’s game is your first taste of the NFL, here’s a quick guide to what’s going on . . . ’’

Some nuggets from the novice fans’ guide: “A touchdown is scored when a player carries the ball into, or catches the ball in, the opposition’s end zone. It does not need to be touched down . . . Penalties usually involve adding or subtracting yards, depending on the guilty party, but players can be sent off in extreme cases.’’

On another page of the program, kicker Rhys Lloyd, last seen with the Carolina Panthers, wrote about being a Brit in the NFL. According to Rhys, “Nobody calls Ray Lewis a plonker.’’

Not me, that’s for sure.

Kickoff was not until 5:06 p.m., and most of the fans spent the earlier part of the day watching Liverpool beat Manchester United in a game that really mattered. The locals obediently waved their Buc flags madly when the Patriots emerged from the tunnel. The Buccaneers got an even louder greeting when they ran out alongside their cheerleaders (the Bucs got to bring their cheerleaders because they were the home team) and a pyrotechnics display. Folks were ready for some American Football.

Regarding ceremonial game captains, the Buccaneers went with Welsh boxing legend Joe Calzaghe and a TV/radio personality named Vernon Kay. In an impressive show of superiority, the Patriots planned on Elton John as official captain. When Sir Elton last played Gillette, he dedicated “Tiny Dancer’’ to the Krafts (Ouch - I think I’d prefer “Saturday Night’s Alright (For Fighting)’’ if I was Bob Kraft). Alas, Elton John was ill with the flu and did not make it to Wembley.

God save the Bucs was more like it. The Patriots and their fans were in for a Hakuna Matata from the opening kickoff.

On Tampa’s fifth play from scrimmage, while darkness fell over Wembley, Brandon Meriweather picked off a pass and ran 39 yards untouched into the end zone. It was a touchdown even though he did not touch the ball down and the crowd seemed to like it.

In the wake of the Titans slaughter, the Patriots were once again Pinball Wizards. With no distractions, hearing no buzzers and bells, New England led, 21-0, with 11 minutes to go in the first half. Wes Welker, who had 10 catches and a first-quarter touchdown, said, “It was definitely something I’ll remember. I should have kept the [touchdown] ball.’’

There was no halftime show. No U2. No Paul McCartney. Instead, we watched 20 guys carrying blue buckets, combing the pitch for chunks of dirt and dust. The turf gang was still working when the Patriots and Bucs came out for the listless second half.

The Patriots were never challenged.

Said Bill Belichick, “The environment was good, and the people of London and all the people connected with our stay here . . . everybody was very hospitable.’’