Game is just not cricket 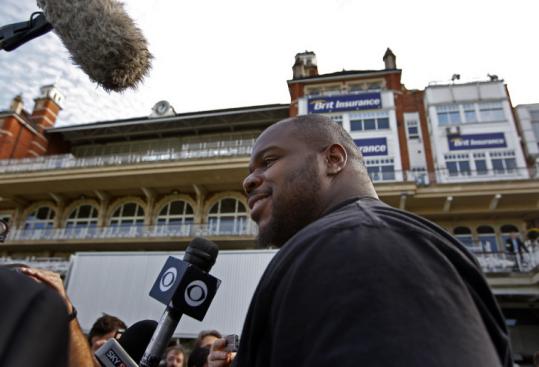 LONDON - The city is beautiful. The people seem to like us again. The Patriots are officially the most popular team in the United Kingdom and there will be a lot of Tom Brady and Randy Moss jerseys at Wembley Stadium when the Patriots take on the Tampa Bay Buccaneers tomorrow afternoon.

Fine. But what are the Patriots doing here? Not to sound xenophobic, but the NFL works perfectly as the No. 1 sport and television program in the United States of America. Our football is neither basketball nor futbol. It will never be global. Kids in Europe and South America are not going to grow up playing Pop Warner, dreaming of Friday night lights. You can’t buy shoulder pads at Harrod’s.

Despite all of the above, the NFL is determined to bring its product to London. This is the third year the league has played a regular-season game here and there is talk of expanding to two games (“fixtures’’ they call them here) soon. Patriots owner Bob Kraft yesterday said he believes there will be an NFL franchise in London within 10 years.

Are you kidding me? Would the Brits bring a major cricket match to Fenway Park? Or Gillette Stadium? Would the Bruins and Canadiens throw down a sheet of ice in Rio and treat the locals to something they’ve never played nor understand? Would the NHL talk about putting a franchise on a continent that doesn’t know a hockey puck from a Big Mac?

Playing NFL games in London is just a bad idea. It’s not necessary. Patriots fans know I am right. Tomorrow’s joust is a “home’’ game for the Bucs. Imagine how you’d feel if this Wembley whim cost the team one of their precious eight dates at Gillette? Imagine how much Bill Belichick likes flying six hours across the ocean and getting his team into town around 5:30 a.m. two days before a game that counts.

Armed with all this skepticism and negativity, I had a chance to talk to Roger Goodell. The Commish got into town Thursday, went to Winston Churchill’s war museum with Kraft Thursday night, and spoke with a handful of reporters in his downtown London digs yesterday.

“This is a way to expand our game on a global basis and to broaden the interest in our game,’’ Goodell started. “Every time we’ve played or brought our game, they take to it in a very positive way. They find it exciting. They’re intrigued by the strategy and certain aspects of the game and the pageantry. Every time we’ve done it, it’s created more excitement.’’

Sorry. Not buying. This is the league’s worst idea since somebody decided it would be great to play a Super Bowl in Jacksonville.

Who exactly is going to the game? Logan Airport has delivered several plane-loads of thirsty Patriots fans in recent days. Can there really be 85,000 New Englanders here?

No, says the Commish. The British are coming.

“I think we had 5,000 fans in the stadium last year that came over from the United States,’’ said Goodell. “It’s the Brits who are coming to the game and it’s the Brits who are watching the games on B-Sky [Skysports] and BBC and [London-based] Channel 5. That’s the most encouraging thing for us.’’

Do the fans here know what they are seeing?

More than they used to, said Goodell.

“We started this with broadcast coverage back in the early ’80s,’’ said the Commish. “It was more a novelty then. Then NFL Europe was here and media coverage expanded. We played a series of international games. As the fans became more knowledgeable they realize now they’re seeing regular-season games. They want to see the real thing. You’ll see, during the game, they react at the right times. They understand the game.’’

Why does the NFL feel the need to do this when the sport is never going to be part of the local culture like soccer, or potentially basketball?

“Well just because you can’t be No. 1 . . . there’s still tremendous demand and passion for your sport. Why wouldn’t you feed that? Why wouldn’t you bring your team over so they can experience that? Just because we’re not played more broadly than soccer or basketball, I don’t think that that’s the standard necessarily. The standard for us is - is there a sufficient audience here that wants to see our game and should you expand your audience by bringing your game to those folks?’’

How do the NFL teams feel about it?

“We want to make sure they have a good experience and when they go back they feel good and that it didn’t harm them in a competitive way.’’

An NFL franchise in London?

“We’re thinking about it. As long as what we continue to do continues to get a positive reaction . . . and you saw that reaction continue to grow, you’d probably put yourself in a positive where you’d be comfortable that it could support a franchise on a full-time basis . . . It may be a possibility.’’

OK, moneybag owners like this. What about players and coaches?

“We get great reaction from players and coaches from the last couple of years. It’s a unique opportunity for them. I’m not telling you it’s everybody.’’

Some coaches - especially one who wears a hooded sweatshirt - love control and are not wild about this.

“Some coaches would play every Sunday at 1:00,’’ said the Commish. “I understand. I read a quote from Bill. He said, ‘I’m a coach. I’m supposed to prepare my team to win games. The league is supposed to worry about these other issues.’ That’s a fair comment.’’

And it’s fair to want to play games in America. At normal hours. In front of fans who grew up playing the sport.

Again, I try. The NFL works perfectly in the States, Mr. Commissioner. Why this?

I sense Goodell has had enough nattering negativity.

“Is this changing anything?,’’ he asked. “We’re still successful in America, aren’t we? Why can’t you do both? I don’t understand why if your game has interest, this is allowing us to take our great game and globalize it in a way where we’ll have people all over the world watching our game. It doesn’t change anything in the United States.’’

That’s why he’s the Commissioner. He has vision.

Me? I’ll be looking to see how many fans applaud when penalty flags are thrown.