LB Thomas inactive, not on hand 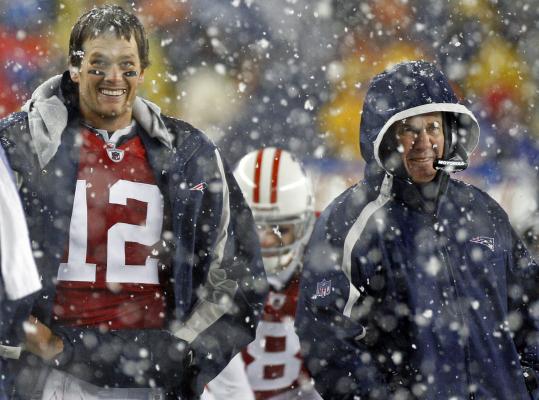 FOXBOROUGH - While the Patriots celebrated a franchise-record victory yesterday, linebacker Adalius Thomas wasn’t to be found.

According to a league source, Thomas never made it to the stadium and was home as a “healthy’’ scratch. Thomas was one of eight players inactive for the Patriots’ 59-0 victory yesterday over the Titans. Derrick Burgess started in place of Thomas, who was a healthy inactive for the first time since his rookie season in 2000, when he was a special-teamer and a reserve linebacker with the Ravens.

According to the source, Thomas has an elbow injury that isn’t believed to be serious, but he was healthy enough to play and being inactive was a coach’s decision.

Thomas was not listed on the injury report all week.

Coach Bill Belichick was asked if Thomas’s absence was personal in nature, and his response led one to believe the decision was personnel-related.

“No, no. We just went with the players we thought would have a bigger role in the game,’’ Belichick said.

Thomas missed practice twice leading up to the Broncos game, but both absences were described as non-injury-related. He is in the third year of a five-year, $35 million deal.

Patriots safety Brandon McGowan was asked after the game if Thomas being inactive was surprising.

“Of course it was surprising, one of the key defensive players or key player on the team sits out. But hey, nothing I can do. We just have to keep playing,’’ McGowan said.

Hoyer debuts
If your team scores a franchise-record 59 points, there are bound to be a few firsts. Rookie quarterback Brian Hoyer made his NFL debut and made the most of it, scoring a touchdown on his first drive.

Hoyer reached the end zone on a 1-yard run, capping a 12-play, 61-yard drive that burned 7:42 off the clock in the third quarter.

By then, the Patriots had a 52-0 lead, but that didn’t take away from Hoyer’s excitement diving into the end zone. Hoyer completed 9 of 11 passes for 52 yards.

Running back BenJarvus Green-Ellis picked up his first carry of the season. He rushed for 67 yards on seven carries and also had two catches for 11 yards.

“It was my first time ever playing in snow, so it was a little difficult, but you just got to adjust to the elements and play through it,’’ said Green-Ellis, who is in his second season.

Rookies Darius Butler and Patrick Chung each picked up the first interception of their careers.

Junior achievement
No doubt the weather was much better in San Diego, where linebacker Junior Seau was surfing last Sunday before coming out of retirement to rejoin the Patriots last week.

Seau practiced for the first time Wednesday and entered yesterday’s snowy contest with 5:41 left in the second quarter. The temperature was 39 degrees at kickoff.

“Now that’s going from surf to turf,’’ said Seau, who was wearing flip-flops as he headed home last night.

Seau collected two tackles and recovered a fumble with 6:56 left in the game, officially playing in his 20th season.

“What I did the last eight months was basically training for the chance and a choice,’’ Seau said. “The chance was if Bill [Belichick] ever called, I would work out enough where I can have a choice, because if I didn’t work out, there wouldn’t be a choice.’’

Titanic struggle
The Tennessee locker room was shell-shocked. The Titans couldn’t believe what had just happened to them.

“I’ve been playing sports since I was 8 years old, and in any sport, I have never experienced anything like this,’’ said linebacker Keith Bulluck.

The Tennessee defense seemed incapable of stopping the Patriots’ offense, and the offense didn’t just fail to gain yards and score points, it had five turnovers.

“I haven’t been in a game like this in the pros,’’ said quarterback Kerry Collins. “In college, I have been part of a couple on the plus side of games like this. We made a lot of mistakes and we played a really good football team. When you put those two things together, it’s going to be a bad loss.’’

Things were particularly bad in the second quarter when the Titans allowed 35 points.

“I was out there for every snap and everything they did was working,’’ said Bulluck. “A couple of times, they had some great calls for what we were doing. Sometimes we were in position to make plays and we didn’t. It’s crazy.’’

Joe Sullivan of the Globe staff contributed to this report. Material from the Associated Press was used in this report. Monique Walker can be reached at mwalker@globe.com.