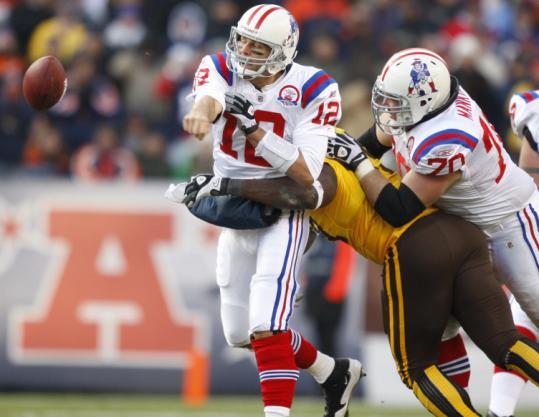 DENVER - Josh McDaniels borrowed a lot of the elements of the Patriot Way when he defected for Denver, and as much credit as McDaniels and his Rocky Mountain imitation deserve for pulling out a 20-17 overtime win over the actual Patriots, the truth is the Broncos could have been coached by Josh Groban and the result may have been the same.

The Broncos have 30 new players on their roster and a precocious coach in McDaniels, but they still have the same old hold over the Patriots.

For all the success Patriots coach Bill Belichick and quarterback Tom Brady have had since 2001, the Broncos have their number. The Broncos are the only team that owns a winning record over the Patriots since 2001 (6-2, including the playoffs) and they’re also the only team Brady has a losing record against; yesterday’s loss dropped No. 12 to 1-6 against Denver.

That’s why you can’t get overly upset about New England’s disappointing loss yesterday at Invesco Field at Mile High. It was just another downer in Denver, a place that has been a house of horrors.

“It really is,’’ said tight end Benjamin Watson. “This will add to the infamy of the series here. It just came down to they played better and when it counted they made the plays.’’

That always seems to be the way it goes when the Patriots visit the Mile High City. Belichick and Co., were playing at Invesco for the first time since their 27-13 playoff loss here in 2006. That game featured Champ Bailey’s 100-yard interception return, a muffed punt by Troy Brown, a missed 43-yard field goal by Adam Vinatieri, and a dubious pass interference call on Asante Samuel.

Yesterday’s loss featured a 98-yard Bronco drive in the fourth quarter to tie the game, a strip-sack by Vonnie Holliday - a player the Patriots looked at but decided not to sign - on Brady at the Denver 49 with 1:45 left, a missed 40-yard field goal by Stephen Gostkowski, and a dubious taunting call on Patriots safety Brandon Meriweather after an incomplete pass from Kyle Orton to Eddie Royal.

That call moved the ball to New England 11, where Brandon Marshall tied the game, 17-17, with his second TD grab of the contest with 5:21 to go, capping the drive.

That’s not even mentioning the odd and fortuitous 14-yard reception former Patriot Jabar Gaffney came up with in the third quarter, catching a ball on third and 14 that was batted into the air by Brandon McGowan and then almost intercepted on the ricochet by Jonathan Wilhite.

That play kept alive a drive that ended with a 24-yard field goal by Matt Prater that cut the Patriots’ lead to 17-10.

Why do Brady and the Patriots have such bad luck in Denver?

“I don’t think we’re playing well enough here,’’ said Brady. “I don’t think we wait for things to bounce our way. You got to go out and make things happen. As an offense we didn’t make things happen today. In the first half there were some plays that we could have made. I missed Randy [Moss] on a touchdown pass. That would have been a big play for us. The second half not scoring any points, that’s a tough way to end the day. I think everyone is frustrated, as they should be. I think everyone is disappointed, but no one is going to bail us out. We have to go back to work.’’

Early on it looked like the Patriots would knock off an undefeated team for the third straight week and build off the momentum of big wins over Atlanta and Baltimore by busting McDaniels and the Broncos.

Brady connected with Wes Welker on an 8-yard touchdown to cap the Patriots’ first possession. On the ensuing possession, Jerod Mayo, making his return from a sprained medial collateral ligament in his right knee, forced a fumble. Then Stephen Gostkowski buried a career-long 53-yard field goal and it was 10-0.

The Patriots led, 17-7, at the half after Brady brilliantly orchestrated a 10-play, 74-yard drive, hitting Watson with a 7-yard touchdown pass with five seconds left in the half.

But in the second half the Denver hex and the Broncos defense, which entering the game had allowed just 26 points all year, went into effect.

“We really squandered some opportunities that we had in the second half, that we typically don’t do,’’ said Brady. “That’s the outcome when you don’t come out and perform well, you get beat.’’

McDaniels said he knew the Patriots wouldn’t beat themselves. That’s why he was irate after a running into the punter penalty extended a Patriots drive. Denver did it again six plays later with an offside when the Patriots were prepared to punt on fourth and 2 from their 34.

Those are usually the type of openings the Patriots capitalize on, but not in this particular geographic location.

“There were just too many bad plays,’’ Brady said. “Too many plays where 11 guys aren’t on the same page doing the right thing. That’s the key to offensive football. When you get a second chance you got to take advantage of them. We didn’t do that.’’

That’s why you can’t get overly upset about yesterday’s loss. The Patriots have the Titans on tap next and then play the Buccaneers across the pond in London. Those teams are a combined 0-10.

The best thing for the Patriots to do is leave Denver and leave thoughts of Denver behind.

There is just something about this place that doesn’t make it the Patriots’ place.

“I don’t know. When you figure it out let me know,’’ said Watson.