He’s out to make up ground 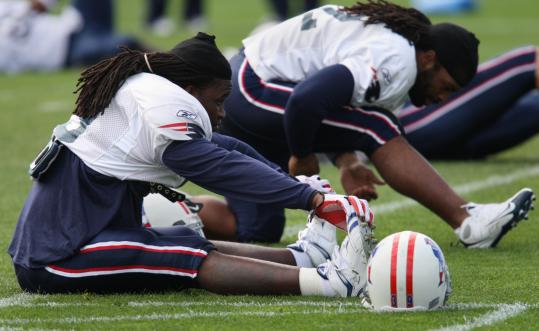 Patriot running back Lawrence Maroney claims that he doesn’t hear the boos, but he definitely has gotten the message. (Jonathan Wiggs/Globe Staff
)
By Christopher L. Gasper Globe Staff / October 8, 2009

FOXBOROUGH - In a quiet corner of the Patriots locker room, Laurence Maroney explained yesterday that he did not hear the boos directed toward him during the fourth quarter of last Sunday’s 27-21 win over the Baltimore Ravens at Gillette Stadium. Maroney’s helmet might have muted the verbal rebuke, but he got the message loud and clear: The Foxborough Faithful expect more from him.

“It’s never one of those things where I think the fans dislike me or don’t want me to be a running back here no more,’’ said Maroney. “I look at it as they want me to do good and they expect more from me, and that’s basically what they’re letting me know. They expect more, and I have to give them more.’’

Maroney vowed to use the displeasure voiced by the fans as motivation.

Four games into the season, Maroney has not delivered the bounce-back season that many were anticipating after his 2008 campaign ended early because of a shoulder injury. Maroney has rushed 27 times for 78 yards, a 2.9-yard average, below the 4.3-yard career average he sported coming into this season.

Last week against the Ravens’ top-ranked run defense, Maroney rushed seven times for 6 yards, drawing the ire of a fan base that is still waiting for him to live up to the billing he carried as a 2006 first-round pick out of Minnesota.

“I loved him,’’ Shanahan told Sports Illustrated. “I think the Patriots got a steal. An absolute steal. I think he’s going to be the best back in the league.’’

Three years later, instead of being among the best backs in the league, Maroney is getting booed in his own backyard.

However, it’s too early to write Maroney off. The birth of his daughter, Kinnedi, in February, and the tribulations of his truncated 2008 have left him more mature.

During his first three NFL seasons, Maroney may have let the booing bother him, but not now.

“I really don’t pay attention to it. I really don’t,’’ he said. “Like I say, I just take it and try to take something that everybody looks at, take a negative and make something good out of it. My mind-set is they want me to do better, so Mr. Maroney, let’s do better.’’

With Fred Taylor, the team’s leading rusher, not practicing yesterday because of an ankle injury, Maroney could have a chance to do better Sunday, when the Patriots face their former offensive coordinator, Josh McDaniels, and his 4-0 Denver Broncos at Invesco Field at Mile High.

Maroney said he has gone back and looked at the film of the Baltimore game and evaluated each carry. He asked himself, was the play blocked correctly? Did he make the right read? In the end, he put the onus on himself to play better while understanding that Baltimore shuts down a lot of good backs; the Patriots averaged 2.8 yards per carry against the Ravens on 30 carries.

“We knew coming into the game there wasn’t going to be a lot of big runs. We knew we were going to have to grind out 2 or 3 yards here, 2 or 3 yards there to keep us in short situations.

The one thing Maroney can’t do is let the criticism make him second-guess his instincts on the field. Against the Ravens, he had it so ingrained in his head to go north-south that after making the first man miss on a short dump-off pass from Tom Brady, Maroney headed back toward the middle of the field, when he had room on the sideline. The play was still a 17-yard gain, but could have been more.

“After looking at the film, I was like, ‘Wow, there is a lot of room out there,’ ’’ he said. “But, hey, my main thing was get north and get upfield as quick as possible and get as many yards as possible.’’

After what may have been the toughest game of his career, Maroney doesn’t see his season going south because of the boos.

“I thought it was funny,’’ he said. “I don’t really look at it as the fans disliking me. They’re basically just disliking my performance and that’s understandable, and as a player I can live with that. Basically, it’s their way of saying, ‘Mr. Maroney get your [act] together.’ ’’