They called for backup 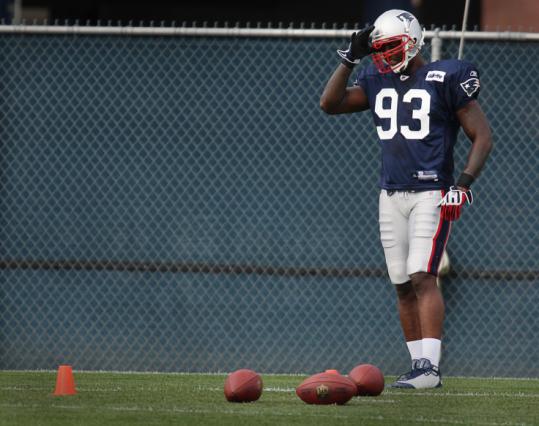 FOXBOROUGH - Prescott Burgess’s three-day blur started in San Diego, on the sideline with the Ravens, watching a defensive play on fourth down seal a 31-26 win. A cross-country flight got him and the team back to Baltimore Monday night. Then he got a phone call from the front office Tuesday afternoon telling him the Ravens were shopping him.

“They said they’re looking to trade me,’’ Burgess said. “I went back home, got the call around 4:30. They said they traded me to the Patriots.’’

The Ravens dealt Burgess to New England for a conditional seventh-round draft pick, a move that surprised the third-year linebacker.

“It was a shock at first,’’ he said. “I didn’t really think it would happen. But it happened and it’s the game of football. It’s a business and I’ve just got to go with the team that they sent me to and continue to play ball.’’

He arrived in New England Tuesday night, took a physical, and was at Gillette Stadium yesterday morning to pick up his playbook, and at that point, he said, “It’s Chinese to me.’’

On his first day in the Patriots locker room, he had the look of a player trying get settled as quickly as possible.

With Jerod Mayo sidelined six to eight weeks with a sprained medial collateral ligament, the Patriots were thin at inside linebacker.

“He played at Michigan with a couple of our other linebackers [Pierre Woods and Shawn Crable],’’ said coach Bill Belichick. “Played outside, played inside at Baltimore, and also played [special teams].’’

Like the Ravens, the Patriots value flexibility, which Burgess offers.

“The more you can do, the better you are,’’ said Burgess, whose two tackles this season both came on special teams. “They can throw you anywhere. And I guess they wanted me enough to trade for me. So wherever they put me, I’ve just got to do the job.’’

Selected by Baltimore in the sixth round of the 2007 draft, Burgess has had to deal with injuries, including a torn quadriceps in his rookie season and a broken forearm last year. Spending two-plus seasons in a Ravens system that has produced a number of fine linebackers had its good and bad points. The bad was that with nine linebackers, Baltimore had a surplus, making Burgess a bargaining chip. The good was that he was able to learn from veterans Ray Lewis and Jarrett Johnson.

“Those guys have been there the longest, so they taught me a whole lot,’’ said Burgess. “[Lewis] always talked to me and told me what to look for. He really gave me some pointers on what to look for when I watch film.’’

A No. 93 jersey - Richard Seymour’s former number - was hanging up and ready for Burgess, who said he was going “from one great team to another.’’

His ex-teammates in Baltimore agreed.

“Once my teammates found out I got traded, they said it’s a great move,’’ Burgess said. “At least I [didn’t] go to a team that wasn’t known for linebackers. I have a good feeling here. I’ve just got to make it my home now.’’