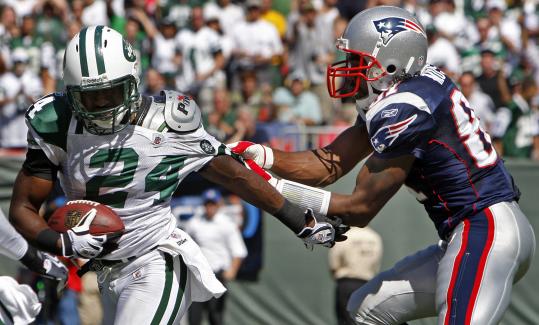 New England’s Randy Moss had to switch from receiver to defender after Jets cornerback Darrelle Revis picked off a deep pass intended for Moss in the first quarter. The New York defense had Moss covered most of the game, holding the Patriots star four catches for 24 yards. (Photos/Jim Davis/Globe Staff)
By Christopher L. Gasper Globe Staff / September 21, 2009

EAST RUTHERFORD, N.J. - Randy Moss has had some big games at Giants Stadium/the Meadowlands since joining the Patriots. Yesterday, wasn’t among them. (Full article: 1192 words)