Two-minute warning: Bills give it away 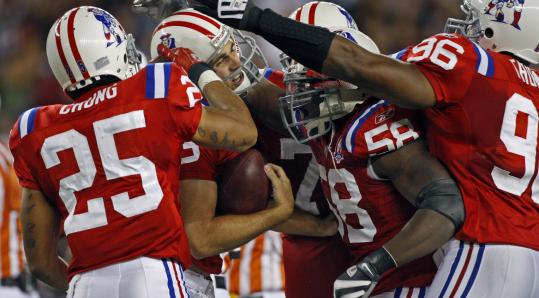 He was as vulnerable as anyone - tears running down his face, heavy sniffs breaking up his words. The hurt he felt after having what could have been a season-opening upset of the predetermined kings of the AFC East slip through his team’s hands and instead having to live with a 25-24 loss was enough for the entire room.

Because of the ruckus caused by the acquisition of the celebrity wide receiver, the recently axed offensive coordinator, and the shaky faith in a newly installed no-huddle offense, the Bills had been tagged a team in disarray before they ever stepped foot in Foxborough. But for 58 minutes, they gave the Patriots more than they could handle, comfortably holding a 24-13 lead with 9:28 left in the fourth quarter.

Then, in the final two minutes, everything fell apart.

They let Patriots quarterback Tom Brady engineer an 11-play, 81-yard scoring drive that brought it to anything-can-happen territory at 24-19. Then, “anything’’ happened. Two yards deep in the end zone with no real clue where he was, Leodis McKelvin decided to take the ensuing kickoff and run with it. He made it to the 31-yard line before he was stripped by Pierre Woods. The Patriots recovered, and after a TD pass to Benjamin Watson, the rest is another Brady fairy tale.

Knowing the story could have been theirs was hard for the Bills to digest (not to mention news that linebacker Paul Posluszny broke his arm again).

“It’s just hard,’’ said Whitner, choking on his words. “I know how hard these guys work. I know how hard I work. I know. Nobody else is there when we’re working and it’s just hard to lose like this. We did exactly what we expected to do in the first 3 1/2 quarters. And we didn’t do what we expected to do in the fourth quarter. We wanted a win, we needed a win, we had a win, and we let it go.’’

Terrell Owens, who caught two passes for 46 yards in his Bills debut, handled it silently, leaving the locker room without speaking.

“What I take from that is we’ve got to play 60 minutes,’’ he said. “That’s the game. One play can beat you and that’s the play that happened to us tonight.’’

McKelvin faced matters head-on, explaining that when he fielded the kick he wasn’t sure if the momentum had taken him back into the end zone and that he was worried that if he kneeled for a touchback, he would accidentally be taking a safety.

“I was thinking in my head did I have two feet inbounds or did my momentum just take me into the end zone,’’ he said. “So I got caught in a situation if I had downed it, they [could have] called it a safety. So I said I’d bring it out.’’

“I have no problem with Leodis coming out with that ball,’’ he said. “He’s a dynamic runner. He was trying to win a football game or ice a football game. We’ve seen him do it. He almost did it there. From the sideline it almost to me looked like he was making a particular effort to cover the ball and somehow it came out there. It’s just one of those things that happens.’’

“You’ve got to finish games, particularly against teams as talented as this team is, with the experience they have,’’ Jauron said. “I didn’t see anybody out there that didn’t leave it on the field. It’s painful right now but it will serve us well as we move along.’’