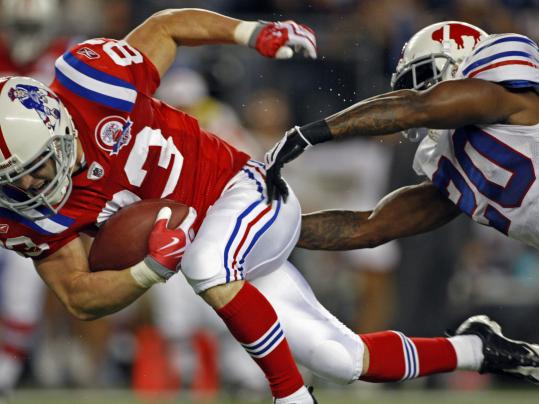 Wide receiver Wes Welker had a leg up on Bills safety Donte Whitner on a 13-yard reception that set up the Patriots’ touchdown in the first half. The Bills led at halftime, 14-10. (Jim Davis/Globe Staff)
By Christopher L. Gasper Globe Staff / September 15, 2009

FOXBOROUGH - There was no word from the Patriots on the status of injured middle linebacker Jerod Mayo, who left last night’s 25-24 win over the Bills in the first quarter with a knee injury and did not return.

The initial belief, however, is that the injury is not as serious as the season-ending anterior cruciate ligament tear quarterback Tom Brady suffered in last year’s season opener. More definitive word on Mayo’s status may come today. In Mayo’s absence, Gary Guyton and Adalius Thomas manned the middle with mixed results.

Guyton had four tackles, but was victimized on screen passes and Buffalo ran 19 times for 90 yards. Thomas had five tackles and a sack. Mayo’s loss also meant the team lost its defensive play-caller.

“Everybody had to pick their game up when Jerod went out,’’ said Thomas. “We didn’t really know what was going on. Me and Gary went in there and just had to communicate with guys. Guys moving around everywhere. It was definitely an adjustment on the fly.’’

Guyton said his first thought when his friend and teammate went down was that he had to step up.

“I got to come up and take control and step up for him and take his place, that was the only thing that went through my mind,’’ said Guyton.

Thomas said in the end, the only thing that mattered when evaluating Guyton was that without Mayo, the Patriots still got the win.

“We won, so he did a great job,’’ said Thomas. “That’s the thing about it. Nobody played great tonight. We made a lot of mistakes.

“We have a lot of corrections to make and we have to do them fast. We have another division game coming up for first place. That right there is just how it goes. We’ll look at the play and make the corrections and move on.’’

All in the running
The Patriots went with a running back-by-committee approach. Laurence Maroney had 10 rushes for 32 yards. Fred Taylor had nine rushes for 25 yards and Kevin Faulk had three rushes for 7 yards, but also had six receptions for 51 yards and a pair of crucial third-down conversions on the Patriots’ first scoring drive, which ended with a 1-yard TD run by Taylor.

Maroney, who is coming back from a broken bone in his shoulder that limited him to three games last season, said he felt good.

According to Raiders owner Al Davis, Kraft had to sign off on the trade. Seymour played eight seasons with the Patriots.

“Richard is someone I have a strong affection for and someone who was a great contributor here and I think the Raiders are very lucky to have him,’’ Kraft said before the game. “He’ll always be one of my favorite Patriots. I’ll always consider him a Patriot.’’

Seymour was dealt to Oakland Sept. 6, but didn’t report until Saturday. That was two days after the team sent him a five-day letter notifying him if he didn’t report by today, he could be put on the reserve/left squad list and suspended for the season without pay.

Seymour said he was delayed because he had to decide where to relocate his family from their home in North Attleborough. Seymour sent his family to South Carolina.

NFL commissioner Roger Goodell, in attendance last night, said he was fine with how Seymour, who had a grievance filed on his behalf by the NFL Players Association that later was withdrawn, handled the situation.

Goodell called Seymour a “class act’’ and said the league understood he had to deal with personal issues before reporting.

Edelman’s absence left the Patriots with just four wide receivers - Randy Moss, Wes Welker, Joey Galloway, and Sam Aiken. With Edelman out, Welker, who was questionable with a knee injury, was the punt returner.

Pryor, a defensive tackle, is supposed to be part of the group of linemen that helped to replace Seymour.

No big deal
Cornerback Shawn Springs, who played in just one exhibition game, was active last night. Springs has a long history with Bills wide receiver Terrell Owens. Springs said only playing in one exhibition game isn’t a big deal. “That happened my second and third year, too, and those were great years for me too, by the way,’’ he said . . . The Patriots wore red and white replicas of their 1963 jerseys and the old white Pat Patriot helmets to celebrate the 50th season of the franchise and the American Football League. The Bills also wore throwbacks. It was the first of four times the Patriots will wear throwback jerseys this season. “I like the helmets a lot,’’ said left guard Logan Mankins. “They’re nice. I’m not a big fan of the white pants, but that’s what we got.’’ . . . The Patriots honored their 50th anniversary team at halftime. Among those in attendance were Troy Brown, Tedy Bruschi, Rodney Harrison, Ty Law, Gino Cappelletti and Hall of Famers Andre Tippett, Nick Buoniconti, and Mike Haynes . . . The Patriots are 8-0 in season openers at Gillette Stadium.