Owens has made noise in Buffalo, but Patriots hope to quiet him on field in season opener 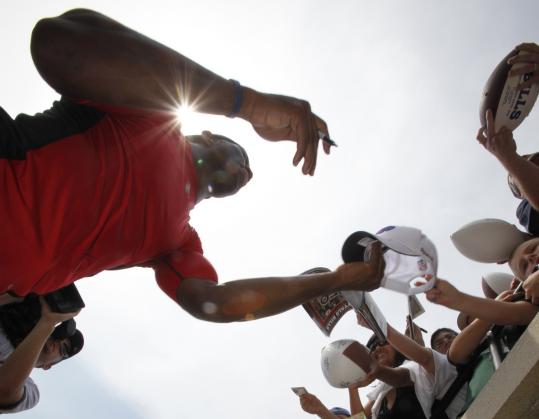 “My name is T.O. You might know me as the most dominating force in football.’’ - Terrell Owens, on his reality TV show

BUFFALO - Seriously, the most dominating force in football?

Bills Nation needs him to prove it. Fast.

Long-suffering fans of the playoff-estranged Bills have surrendered their desperate souls to Owens. They have gotten their popcorn ready to watch him indulge himself on reality TV with six-figure bling in Beverly Hills. They have lapped up his new cereal, “T.O.’s Low Fat Honey Nut Toasted Oats,’’ after he gushed about his “beautiful handsome face’’ on the box. They have donned T-shirts adorned with his signature paean to himself: “I Love Me Some Me.’’ They have swooned over him at the Anchor Bar, birthplace of the Buffalo-style chicken wing. Buffalo’s mayor even gave him the key to the city.

Fourteen years after the Bills last won a postseason game, they have bet their 2009 fortunes largely on Owens, a 35-year-old gridiron diva who has caught more touchdown passes (139) than any active NFL player but has yet to win a Super Bowl ring.

All T.O. needs to do to begin ending their drought is perform like the most dominating force in football tonight when the Bills open the season against the Patriots at Gillette Stadium.

“When the lights come on, I’m ready to shine,’’ Owens said with his trademark grace last week at Buffalo’s fieldhouse in Orchard Park, N.Y.

The man who has crowned himself “the eighth wonder of the world’’ dared to envision the unfathomable. Preparing for his first trip to Foxborough since 1998, Owens embraced the possibility of leading Buffalo to victory over a Patriots team that has thwacked the Bills 11 straight times by an average margin of 20 1/2 points.

Heady stuff for a guy whose team is given as much chance of winning the next Super Bowl as a glazed doughnut.

“I’ve been given an opportunity by the Buffalo Bills to come in and try to create some energy, a buzz, and so far I’ve done that,’’ Owens said. “The other part of that is going out there and producing on the football field, and I plan to do that.’’

If he does it well enough, they might rename Niagara Falls after him. In the eyes of one western New York blogger, Terrell Eldorado Owens already is the region’s “gift from the gods.’’

In truth, he is a gift from the Cowboys, who grew so sick of his act after three seasons without a playoff victory that they summarily cut him in March. The Bills signed him two days later to a $6.5 million, one-year deal, knowing full well his reputation as a serial bridge-burner prone to mercurial mood swings. Bills executives prized his production - Owens ranks among the NFL’s career leaders in nearly every major receiving category - over the risk that he will leave a bitter residue in Buffalo as he has everywhere he has played: San Francisco, Philadelphia, and Dallas.

“The Original 81,’’ as he dubbed himself in 2007 before he faced the Patriots and Randy Moss (“the other 81’’) in Dallas, soon endeared himself to Bills Nation by taking a turn as a local sportscaster (“The top story in sports tonight is, I’m here’’). He invited Bills diehards to track his every utterance on Twitter, including his apocalyptic injury report after the first exhibition game (“Damn my toe is aching!’’). And the Buffalo News devoted nearly a quarter of its front page to helping him kick off a campaign to feed the region’s needy (81tackleshunger.com).

In came T.O., up went ticket and merchandise sales.

“He’s a master of publicity,’’ Bills fan and Buffalo businessman John Hofmann Jr. said over a beer at the Anchor Bar. “He hasn’t really done anything for us yet, but the way I look at it, anything is possible in Buffalo. It’s the only city in the world where you can experience all four seasons in one day. Nothing he does would surprise me.’’

Across the bar, manager Ivano Toscani cast a more skeptical view of the city’s would-be savior.

“What has he done?’’ Toscani said. “The other teams he was with got rid of him. If you have a good employee, you don’t get rid of him, do you? So far, he hasn’t shown us anything. Hopefully, that will change.’’

With or without Owens, the Bills face a colossal challenge. One of three teams that have failed to reach the playoffs this century (Detroit and Houston are the others), Buffalo has gone 7-9 the last three years under coach Dick Jauron, whose job security hinges on how much he can squeeze out of T.O. and Co. this season.

Jauron already has lost Pro Bowl running back Marshawn Lynch for the first three games; Lynch was suspended after he was caught with a semiautomatic handgun. The Bills also shipped Pro Bowl left tackle Jason Peters to the Eagles for draft choices. Then Jauron axed offensive coordinator Turk Schonert 10 days before the season. Four days later, he cut Peters’s replacement, Langston Walker, leaving an already-anemic offensive line with three starters who never have appeared in an NFL game.

Jauron all but paled at the prospect of feeding them to the Patriots.

Complicating matters, Jauron spent much of the preseason trying to build a no-huddle offense around quarterback Trent Edwards. As Edwards struggled, though, the scheme looked more like a no-touchdown offense. And Owens, who played sparingly in the exhibition season because of his toe injury, last week expressed displeasure with the plan, though he insisted he was joking.

How long it takes for his jokes to turn to jabs, however, remains to be seen. Few quarterbacks and coaches have escaped T.O.’s wrath.

“Everybody has heard the stories, but you can’t judge him on hearsay unless he shows you otherwise,’’ Bills defensive end Chris Kelsay said. “So far, he’s been a blessing to work with.’’

Former Harvard quarterback Ryan Fitzpatrick, who backs up Edwards, started 12 games last year for the Bengals, working with another controversial receiver, Chad Ochocinco. While some players might wince when a teammate provides an opponent bulletin board material, as Owens did last week in joking about bringing his “spy camera’’ to Foxborough, no one in the Bills locker room has bristled yet at T.O.’s brashness.

“I don’t think many people mind him talking because of what he produces on the field,’’ Fitzpatrick said. “He has backed it up his whole career.’’

At least one of T.O.’s teammates is downright enthused about the possibilities. Second-year receiver Steve Johnson, 22, grew up in San Francisco trying to imitate Owens. Now Johnson is close enough to learn directly from the star, maybe even gather some pixie dust.

“There’s a lot expected of T.O. here,’’ Johnson said. “Everybody knows what kind of player he is. He says, ‘Go big or go home,’ and I believe in him. I think he’s going to help us get some more wins and, who knows, maybe get to the Super Bowl.’’

Then, indeed, we might know him as the most dominating force in football.