Smith may not catch on

No receptions could signal end 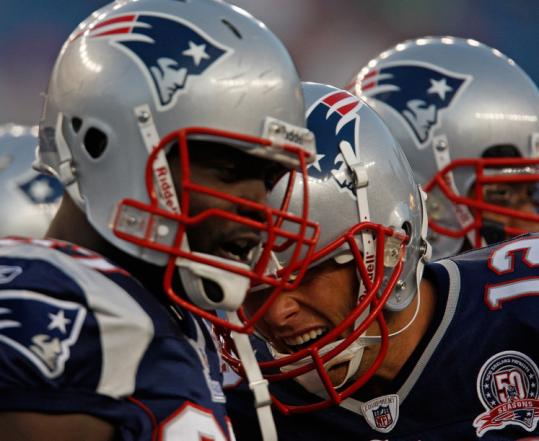 Tom Brady (right) didn’t play, but that didn’t stop he and a teammate from putting their heads together before kickoff. (Barry Chin/Globe Staff)
By Christopher L. Gasper Globe Staff / September 4, 2009

FOXBOROUGH - The Patriots’ exhibition season ended last night with a 38-27 win over the Giants. It also could have marked the end of tight end Alex Smith’s stint with the Patriots.

Smith, who was acquired from the Buccaneers during the offseason for a fifth-round draft pick, finished the preseason without a catch and was out on the field late in the fourth quarter last night, which is usually not a good sign for a veteran.

Smith, who looks to be competing with Benjamin Watson for the third tight end slot, was upbeat, saying he embraced the extra playing time, but he acknowledged he had never been in a situation like this in his previous four seasons - fighting for a roster spot.

“It’s out of my control,’’ he said. “All I can control is what I do on the field, so I feel like as long as I continue to progress, the product will speak for itself.’’

Smith, who has 43 career starts in 58 games, acknowledged this preseason has been different.

“It’s just a lot different just because I was familiar with the offense for four years and had that comfort zone,’’ he said. “Coming out here, it was definitely foreign to me, but I feel like I got better with every game, every chance I had to get on the field with the guys and have those live reps. It’s a lot different than just practicing and knowing your assignments, having to react and do everything on the fly instead of just thinking about things. As long as I progress every game, that’s all I was thinking about.’’

Does he think he has done enough to make the team?

“That’s up to the coaches,’’ said Smith. “I just tried to get better every day I could. It’s up to them to decide, and we’ll see what they decide.’’

Dressing the part
Quarterback Tom Brady was in uniform and tested his sore shoulder before last night’s game against the Giants, not showing any ill effects from being crushed by the Redskins’ Albert Haynesworth last Friday, but, as expected, didn’t play. Undrafted rookie Brian Hoyer started at quarterback and went the whole way.

All of the Patriots were dressed and on the field for warm-ups, including wide receiver Wes Welker, cornerback Shawn Springs, and linebacker Shawn Crable, who have been injured at times during training camp.

Later, Slater
Second-year safety and special-teamer Matthew Slater, who is on the roster bubble, left the game in the second quarter when he injured his left arm following a 20-yard kickoff return.

Slater, who drew the start and stopped Giants running back Ahmad Bradshaw for a 2-yard loss, was trying to stretch his return to the outside when he was tripped, lost his balance, and landed awkwardly. He grasped his forearm in pain and was helped off the field and taken to the locker room.

The Patriots announced in the second quarter that Slater would not return.

Beaten up
It was a tough night for rookie safety Patrick Chung, who started and was in coverage on the Giants’ first two touchdowns.

Chung took the blame for both of Sinorice Moss’s first-quarter TD grabs. “It’s me, man,’’ he said. “There are things I have to work on, just get my technique right and I’ll be good.’’

To Chung’s credit, he bounced back, finishing with a team-high nine tackles and batting away a pass on third down on the Giants’ final drive.

Chung said that if you let a receiver get behind you, you have to put that behind you.

“That’s a DB, as soon as you got beat, that play has to be over because that play will mess up your whole game,’’ Chung said.

Putting out feelers?
With commissioner Roger Goodell ruling that Eagles quarterback Michael Vick will be eligible to play starting in Week 3, the team may be more inclined to trade reserve A.J. Feeley. The Patriots are among the teams reported to be interested in Feeley, who was 18 of 24 for 211 yards and a touchdown against the Patriots Aug. 13.

Philadelphia has Donovan McNabb as its starter and then Vick, 2007 second-round pick Kevin Kolb, and Feeley. It was interesting that Andrew Walter, the perceived backup for the Patriots, didn’t play last night.

Walter spoke briefly with reporters, saying he’s ready every week and that “as far as any other questions, I think the guys who played should be the ones to answer the questions.’’

Making a statement
Wide receiver Terrence Nunn made his case for a roster spot. Nunn had three catches for 64 yards and a 49-yard kickoff return late in the second quarter . . . During the broadcast of last night’s game, Kraft announced that Tedy Bruschi, who retired Monday after 13 seasons with the Patriots, would be named to the franchise’s 50th anniversary team and would be the defensive captain.