Nose getting out of joint?

Wilfork frustrated with the Patriots 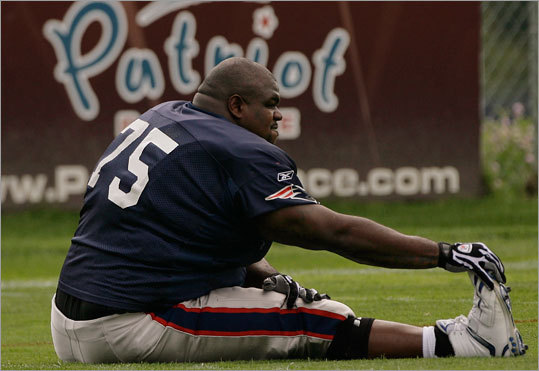 With the Patriots’ season set to kick off three weeks from today, Wilfork, who is in the final year of a six-year rookie deal and will make $2.2 million in base salary, and the Patriots are no closer to an extension. When asked yesterday about the status of contract negotiations, Wilfork said “there isn’t anything there’’ and answered “no’’ when asked if the Patriots had made him an offer that made him think those terms could lead to a deal getting done.

He referred to the situation as “pretty frustrating.’’

Patriots owner Robert Kraft said Aug. 11 that the looming labor uncertainty in the NFL - 2010 is the final year of the collective bargaining agreement - and the number of quality players whose contracts are up after this season complicated negotiations because the franchise doesn’t know what the new CBA rules will be.

“Not at all,’’ he said. “There are 31 other teams out there and a lot of them are making moves. They are in the same situation that we’re in. I understand what he’s saying, but by the same token, it’s not stopping the other teams from making moves or [doing] what they have to do.

“Trust me, I understand where they are coming from. We have a lot of guys on this team [whose contracts] are going to be up, pretty good players. I know that’s pretty tough for them. But at the same time, the labor situation is all over the NFL.’’

The Patriots have more than two dozen players entering the final year of their contracts, including Richard Seymour, Logan Mankins, and Stephen Gostkowski.

Wilfork acknowledged the Patriots have other players to consider, but he said the CBA situation hasn’t stopped teams from signing players to long-term contracts.

“You have guys out there that are getting contracts done, so it’s not like nobody is getting contracts done,’’ said Wilfork. “But I see both sides. I can truly sit here and say, ‘I see where the organization is coming from.’ At the same time, they see the same thing I’m seeing, other teams are getting deals done also. Like I said, they might not have a situation like we have, where we have a bunch of guys that are top-notch players who are up. For that reason, I can understand, they’re probably in a little awkward situation. But at the same time, the whole NFL is.’’

In his comments Aug. 11, Kraft did leave leeway for a deal, saying the team doesn’t have a “hard and fast rule’’ about giving out extensions before there is a new CBA.

The Patriots probably would do a deal with Wilfork if it were club-friendly like Ty Warren’s extension in 2007 (five years, about $35 million).

Wilfork was asked whether he believed in the concept of a hometown discount and declined to answer.

Wilfork has answered the call for his team, though. The only day of practice he missed was to attend the birth of his son, David, who was born Aug. 5.

“I’m loving it . . . father all over again,’’ said Wilfork. “Coming into camp with a newborn, that’s pretty tough, but I strap my helmet on every day and I don’t complain. I come to work. That’s the responsibility I take upon myself. I’ll be there for my teammates, and I’ll be there for my family at night.’’

With the Patriots unable to placate Wilfork with a new contract, they might be trying to do it by putting him in a position to make more plays via 4-3 fronts. That was the case against Cincinnati Thursday night, when Wilfork knifed into the backfield and stopped Cedric Benson for no gain.

“I love a 4-3. I love when they just say, ‘Go get the ball.’ But it’s not like that,’’ said Wilfork, who holds the point of attack in a 3-4 defense. “Sometimes we get a little bone here or there and we have to make do. When we do get that bone we have to take advantage of it because they’re not going to come often.’’

One possible compromise for the Patriots and Wilfork is to work out an agreement that precludes the team from using the franchise tag on Wilfork following the season, guaranteeing he’ll hit the free agent market. That was the card Asante Samuel played in 2007 and it was a clause Leigh Bodden got put into his one-year $2.25 million deal with the Patriots.

Wilfork wouldn’t rule that out.

“I just have to play the waiting game,’’ he said. “I’m waiting just like everybody else is waiting. Time will tell. I’m going to stay positive throughout this whole thing. That’s one thing I will do - stay positive - because I’m doing what I love regardless of how you slice it. I’m playing football. I have my family, my family is healthy, I’m fine, I can roll with that.’’

Mike Reiss of the Globe staff contributed to this report.