Butler has been learning on the fly 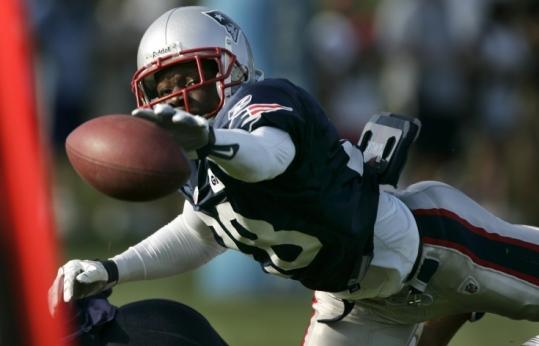 Darius Butler, a rookie out of UConn, is reaching for the big time, battling for playing time in the Patriots’ secondary. (File/Steven Senne/Associated Press)
By Mike Reiss Globe Staff / August 14, 2009

PHILADELPHIA - As rookie cornerback Darius Butler approached the Patriots’ exhibition opener last night against the Eagles, he figured he’d received the best prepping possible. After all, what could be better than going up against Randy Moss in practice?

The daily battles with Moss and the rest of the New England receiving corps have been an on-field orientation that has helped smooth his transition from the University of Connecticut to the NFL.

Asked if he’s stopped to think about realizing his NFL dream when he’s trying to defend Moss, he laughed.

“You really don’t have time to do that when you line up across from that dude,’’ said Butler, the 41st overall selection in the draft.

“Not only Moss, but then there’s [Wes] Welker, [Joey] Galloway, Greg Lewis - all those guys can beat you any play, especially when you have guys back there throwing the ball like Tom Brady. It’s a great challenge every play.’’

Although Butler recently switched his jersey number to 28 - which he donned his first few years at UConn - it hasn’t taken him long to realize that he’s in a different league now.

“It’s definitely an adjustment because in college you might line up against one fast guy this week, and three weeks later you might have another guy that is pretty good,’’ said Butler, whose uncle, Gene Atkins, played in the NFL from 1987-96 with the Saints and Dolphins, and whose cousin, Willis McGahee, is a running back with the Ravens.

“This game, everybody that you line up across is good, and they can beat you on any play,’’ said Butler. “You have to be on your p’s and q’s on every play.’’

Butler’s athleticism and ball skills have been on display throughout training camp. He’s been lining up at both an outside position and at the “star’’ position against slot receivers. At times when he’s played the “star,’’ he’s been victimized by the quickness of Welker and rookie Julian Edelman.

Butler said he played that spot his first two seasons as UConn, before moving to an outside position, so “it’s a little adjustment getting used to it again.

“There is just a lot more open field, and obviously you can’t touch guys after 5 yards in this league, so it makes it a little harder to guard Wes Welker in the slot when you can’t touch him. It’s different.’’

At the same time, such versatility and adding kick-return skills to his repertoire could give Butler (5 feet 10 inches, 185 pounds) an edge over second-year player Terrence Wheatley for playing time, because Wheatley has mostly been a pure outside corner. Both Butler and Wheatley have been working behind Shawn Springs, Leigh Bodden, and Jonathan Wilhite.

Butler said the entire secondary, including safeties, has eased his adjustment.

It probably helps that Wheatley knows exactly what Butler is going through, because he lived it last year.

“[Learning the playbook] is the hardest thing, not so much the game itself,’’ Wheatley said. “That way you can go out there and you don’t have to think as you’re playing because that slows you down.’’

Butler believes things are going well for him in that regard, as he adjusts to a quick NFL pace.

“It’s just getting on a schedule and getting used to the two-a-days and how things are run,’’ he said. “You have a practice, then downtime, then another practice, just a lot of meetings, a lot of install, everything going kind of fast. So it’s just kind of staying focused and picking things up.

“I don’t think I’ve been surprised yet,’’ he continued. “I had prepared and knew I had to come in and work hard and come into camp in shape. I knew everyone was a lot faster, quarterbacks are better, everything is a little more crisp. Just to see it in real speed is different.’’

Last night, Butler was ready to experience his first NFL game, albeit of the exhibition variety.

Christopher L. Gasper of the Globe staff contributed to this report; Mike Reiss can be reached at mreiss@globe.com.