For debut of sports radio station, a Pats’ audible 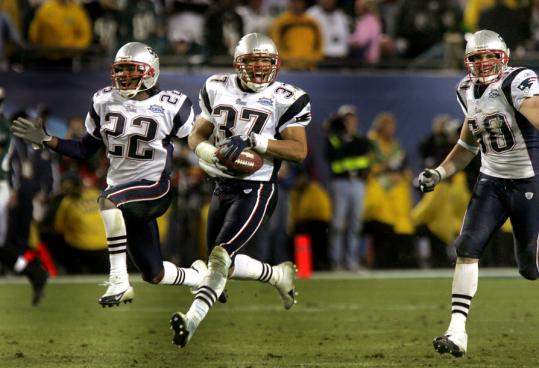 Listeners to the debut of 98.5 FM heard a replay of the Patriots’ Super Bowl win over Philadelphia, sealed by Rodney Harrison’s interception. (Globe/File 2005)
By Johnny Diaz Globe Staff / August 14, 2009

Listeners were confused yesterday when they tuned into Boston’s newest sports talk radio station, 98.5 FM: Instead of the live deejay banter the station had originally planned for its debut, it aired 10 hours of the New England Patriots’ three Super Bowl victories.

The station, billed as The Sports Hub, aired the title games from 3 a.m. to 1 p.m. and then went live with SportsNet personality Michael Felger and Boston Globe sports writer Tony Massarotti through 4 p.m. before airing the Patriots pre-game show.

On Wednesday, the station had said it would launch yesterday at 6 a.m. with Fred Toucher and Rich Shertenlieb, formerly of WBCN, which went off the air this week. Toucher and Rich would be followed by Gary Tanguay of Comcast SportsNet and former New England Patriots’ quarterback Scott Zolak from 10 a.m. to 2 p.m., Felger and Massarotti from 2 to 6 p.m., and Damon “D.A.’’ Amendolara from 6 to midnight.

“Most of the listeners understood that we were building to a crescendo,’’ said Mark Hannon, senior vice president and market manager for CBS Radio Boston, which owns The Sports Hub. He said a decision to change the station’s lineup happened sometime Wednesday, but he didn’t specify what time. “We thought that listeners would get a kick out of the nostalgia over the victories.’’

Hannon added that having the first preseason Patriots game with quarterback Tom Brady, after he missed last season because of an injury, “threw the normal programming schedule out of whack.’’

The Sports Hub is the flagship station for the Patriots and Boston Bruins games. Hannon said that if the station had stuck to its original programming, Tanguay would have had to work his 10 a.m. to 2 p.m. shift and then return at 4 p.m. for the Patriots pre-game show.

“We just decided as we got closer to the launch that it would be a little clunky to set it up that way,’’ Hannon said. “We could have done a better job of communicating that message.’’

Hannon said he was pleased with the debut, which featured interviews with Theo Epstein, general manager of the Red Sox, and Jeremy Jacobs, owner of the Boston Bruins. “As with any start-up, there will definitely be a learning curve,’’ he said.

On news websites, listeners expressed mixed reactions about the station kicking off with the old Patriot games. Wrote one, “I was quite puzzled to hear a broadcast of a game.’’ Commented another: “An awesome way to get off to a great start.’’

Hannon said The Sports Hub will return to its regular schedule today beginning at 6 a.m. with Toucher and Shertenlieb. The station emerged after it replaced adult contemporary music station WBMX, or Mix 98.5 FM, which moved to 104.1 FM, former home of rock station WBCN.

CBS Radio Boston made the switch to make room for the sports talk radio station so it challenge powerhouse WEEI-AM (850) and ESPN Radio (890), also on AM.

Officials from WEEI could not be reached for comment yesterday.