Patriots will be counting on O’Brien’s special touch 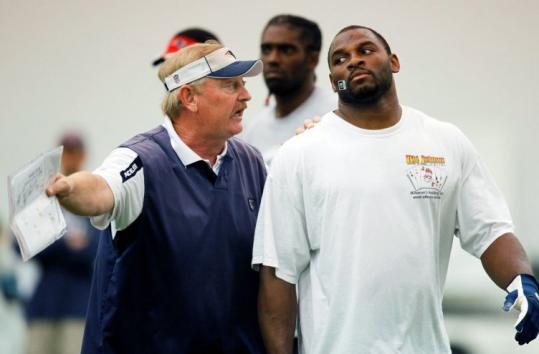 FOXBOROUGH - Having spent some of his formative years in the NFL as a special teams coach, Bill Belichick has an appreciation for the role. He has often said that it prepared him to be a head coach.

He has that same appreciation for the Patriots’ new special teams coach, Scott O’Brien, who held the same job during Belichick’s time as head coach of the Cleveland Browns from 1991-95.

“He’s really probably as good a coach as I’ve ever been around,’’ said Belichick. “He’s very thorough. He has great knowledge, work ethic, good ability to communicate with the players and motivate the players. He’s so thorough with his knowledge and understanding of the subjects that he’s teaching that you gain an instant respect for him.’’

Belichick offers praise like that about as often as he prowls the sideline sans his hooded sweatshirt. But in 16 seasons as a special teams coach with the Browns/Ravens (1991-98), Panthers (1999-2004), and Broncos (2007-08), the 52-year-old O’Brien oversaw units that produced 29 special teams scores, including 17 punt returns for touchdowns.

Replacing Brad Seely, O’Brien has already made quite an impression in training camp. His decision to dive into the team’s slip-and-slide rookie initiation Sunday not only was one of the highlights of camp thus far, but it endeared him to his players.

“I don’t know if there was any motivation behind it,’’ said O’Brien, “but I think it was like everybody else. You’ve heard about it, and the players can kind of persuade you into doing things you may not want to do. I kind of went along with it. It was kind of neat.’’

O’Brien has his work cut out for him, as the team has undergone an overhaul on special teams. Gone are longtime special teams captain Larry Izzo, cult-hero long snapper Lonie Paxton, and kickoff returner Ellis Hobbs, who ranked second in the NFL last season with an average of 28.5 yards per return and set a franchise record with 1,281 yards.

Like all special teams coaches, he also has to deal with the NFL rule change that limits blocking wedges on kickoffs to just two players lined up shoulder to shoulder. O’Brien said that, schematically, the rule doesn’t affect his approach very much.

However, Belichick has stated that in the high-speed world of kickoff returns, the rule is open to some interpretation, creating a level of uncertainty.

“I think anytime they change a rule or try to bring in a rule, I think in the preseason you’re going to find out [how it is officiated],’’ said O’Brien. “We try to do as much as we can to teach the players the rule itself and the techniques within the rules that we’re trying to accomplish.

“There is gray area there because, for coaches, we see it a little bit differently. We can see it in our mind when the rule comes out or when an official talks to us about a rule. When they give that to us, we can almost determine, ‘OK, what if this happens?’ Because we don’t want our players in that situation. We don’t want to be forced into that situation, so I think [in] preseason, we’ll get a better feel for it.’’

O’Brien can also use the preseason to pick between long snappers Nathan Hodel, whom O’Brien worked with in Carolina, and rookie Jake Ingram, and to chart the progress as a possible punt returner of Julian Edelman.

Punt returning is O’Brien’s specialty. Half of Eric Metcalf’s NFL-record 10 punt-return touchdowns came playing for O’Brien, and seven times O’Brien’s punt-return units have finished in the top 10 in the NFL. The Patriots haven’t had a regular-season punt return for a touchdown since 2001.

Edelman is not only trying to make the switch from college quarterback to pro wide receiver, he’s also trying to learn to be a punt returner. So far the results have been mixed.

“He’s learning not only catching the ball, but there is a lot more to it - his field awareness, where did he catch it at, where did you start, what did we have on the field, were we singling up outside?’’ said O’Brien. “There are a lot of things going through his mind.

“There is nothing more important than catching the football and protecting it, don’t get me wrong, but there is more to it than that. We’re kind of bringing him along.’’

On kickoff returns, Laurence Maroney has gotten consistent repetitions. As a rookie in 2006, the running back finished second in the NFL with an average of 28 yards per return.

O’Brien has been impressed with Maroney as a kickoff returner but said the whole team is adjusting to a different return scheme.

Change is never easy, but Belichick is confident O’Brien will give the Patriots’ special teams a leg up.

“I don’t think anybody else knows the kicking game and the different components of it better than Scott does,’’ said Belichick. “He’s just an outstanding coach in every aspect: personnel evaluation, game planning, strategy, fundamental teaching at every position, in the kicking game, including the specialists. He’s probably as good a coach as I’ve ever had the privilege to work with.’’